Toronto: 150 crocodiles and alligators rescued from man’s home International Business Times. They were all in good shape.

By 2100, Earth Will Have an Entirely Different Ocean Motherboard. Translation: the jackpot is coming sooner than you think.

Aerial tour of the China blast site BBC. This is of the explosion itself

Back to Fundamentals in Emerging Markets Dani Rodrik, Project Syndicate (David L). This part has implications for Greece, which is much more like a developing economy than an advanced economy:

For developing economies, the three key growth fundamentals are acquisition of skills and education by the workforce; improvement of institutions and governance; and structural transformation from low-productivity to high-productivity activities (as typified by industrialization…

Unlike East Asian economies, today’s emerging markets cannot rely on export surpluses in manufactures as their engine of structural transformation and growth. So they are forced to rely more on the longer-term fundamentals of education and institutions. These do generate growth – and indeed are ultimately indispensable to it. But they generate 2-3% annual growth at best, not East Asia’s 7-8% rates.

TTIP: The View from the Other CEPR CEPR. From the press release:

A new issue brief from the Center for Economic and Policy Research (CEPR) examines widely cited studies on the potential gains from the Trans-Atlantic Trade and Investment Partnership (TTIP) and finds that they would deliver just 40 cents per person per day in the U.S., and 0.2 euros per person per day in the EU. Supporters of the deal between the U.S. and EU have touted the supposed gains, but the CEPR brief notes that these gains would easily be dwarfed by losses the great majority of workers would experience due to increased inequality, and also that the original studies did not examine the costs from protections for pharmaceuticals and other non-tariff barriers (NTB).

Rumours of the euro’s likely demise are greatly exaggerated EUROPP

Dubai is the most decadent place on earth Business Insider

The messy US ‘strategy’ in Syria RT (resilc)

Mentally-Ill Black Women Suffer Horrific Abuses In LA Jails ShadowProof. Resilc: “Where are the Black Congressionals on this outrage? Too busy cashing in with the white guys in Congress?

The junk bond market ‘is having a coronary’: David Rosenberg CNBC

Bernanke, Paulson and Geithner Join Yale Effort to Update Crisis-Response Playbook Wall Street Journal (Chuck L). Bernanke advises Citadel and Geithner is the head of Warburg Pincus. This stinks, even before we get to the “Why should we listen to their advice” problem…

Food Banks Struggle to Meet Surprising Demand Associated Press (resilc) That word “surprising” is increasingly serving as a marker to Bad Thing Happening for which TPTB disavow all responsibility.

The Economic Inequality in Academia Counterpunch

The Fight Over Transparency: Round Two PLOS (Chuck L). Has implications well beyond the corruption of health care research.

Antidote du jour. Since we’ve been neglecting octopus and they are now in the news, we are making up for lost opportunities. @_bmturner_ via Richard Smith: 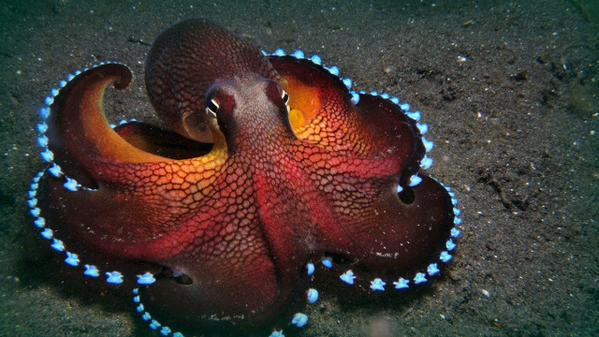