One of the Most Popular Doom Scenarios for the U.S. Economy Is Fizzling Out Joe Weisenthal, Bloomberg

The Upside of a Downturn in Silicon Valley NYT

How Do You Short China? WSJ

China’s Hunt for Growth in the Countryside Bloomberg

China Falters, and the Global Economy Is Forced to Adapt New York Times. “The leadership, concerned with maintaining social stability, has been quick to act.” Sounds like the Chinese Communists are more scared of their people than the Demopublicans are of us.

There is only one way to China-proof Australia Macrobusiness

10 excuses for being absent from Bersih – Edward Beruang Malaysian. Big demo against President Najib, the guy with the mysterious $700 million in his personal bank account. Note that a Najib government would have had to sign TPP.

Update Coeure: EZ Needs Reforms to Affirm Euro Is Irreversible Market News. If you have to say it..

“If the agreement goes into effect, it would write off 20 percent of the country’s foreign debt and go far to help Ukraine avoid a drawn-out, Greek-style negotiation with large bondholders… bondholders including the giant California-based Franklin Templeton fund – Ukraine’s largest lender – would accept an immediate loss on the principal.”

William: “Those in a position to open up new markets for the atlantic ruling class get special treatment…”

America Is So in Play Peggy Noonan, Wall Street Journal. I’m with Nooners on this one. Clinton isn’t. Bush isn’t. Sanders is. Trump is.

EXCLUSIVE: ‘We’re done with this’ – how ‘mom and pop’ firm which maintained Clinton’s home-brew server ditched its contract as soon as scandal broke Daily Mail

No, Bernie Sanders still isn’t going to run as an independent WaPo

Gun violence in America, in 17 maps and charts Vox

The Case Against Cash Bail The New Yorker

Ex-Cop Who Killed Six People Now Teaches Other Officers When to Use Their Guns Gawker. Well, he’s the expert!

New Orleans After Katrina: Inequality Soars as Poor Continue to Be Left Behind in City’s “Recovery” Democracy Now

What Amazon Didn’t Understand About Overwork The Nation

In landmark case, labor board will let more workers bargain with their employer’s employer WaPo

George A. Akerlof – Phishing for Phools Chronicle of Higher Education

Tech nerds are smart. But they can’t seem to get their heads around politics. Vox

The day macroeconomics changed Mainly Macro. “[I]f I cannot understand something, it is best to assume it does not exist. [Not.]” 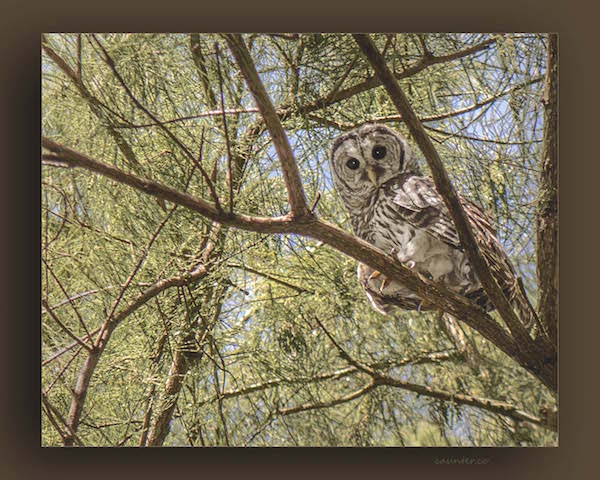 I was at the UCF campus in Orlando, Florida a couple of days ago and I saw this owl sitting far up in the tree, looking down on the students walking under it. Of course I’m the only one weird enough to walk around campus looking straight up, so no one else saw it.