“The increasingly ugly tenor of such clashes [between Trump supporters and detractors] has brought even sharper focus to Trump’s rhetoric, which Republicans and Democrats alike have described as divisive and even racist. It has elevated the anxiety of Republicans trying to grow the party’s appeal — not shrink it. And it has left many of them wondering whether the conflicts could get worse before they get better” [WaPo].

The Pennsylvania Senate race is getting more interesting than it already is [Will Bunch, Philadelphia Inquirer]. Will Bunch meets “Mayor Rust” in Braddock, PA. One, two, many Jesse Venturas? Except with degrees in public administration from Harvard?

Republican debate: Annotated transcript [WaPo]. (Via RapGenius, interestingly enough.) On vax, I was wrong on my hot take. Carson:  Link to autism “not demonstrated,” though he airbrushes the anti-vax movement (“not adequately revealed to the public what’s actually going on, i.e., what the studies say), and says that “certain” vaccines, “smaller doses over a longer period of time,” are “very important,” “[but, you know, a lot of this is — is — is pushed by big government.” Trump: Buys autism, says “I am totally in favor of vaccines,” wants “smaller doses over a longer period of time.” Paul also wants the doses “spread out,” and points out that the smallpox vaccine was “done voluntary.” “So I’m all for vaccines. But I’m also for freedom.” I don’t have my winger talking point manual to hand, so I don’t know what spreading the doses out means in concrete policy terms.

Republican debate: “But the truly awesome moment came when she asserted that the videos being used to attack Planned Parenthood show “a fully formed fetus on the table, its heart beating, its legs kicking while someone says we have to keep it alive to harvest its brain.” No, they don’t. Anti-abortion activists have claimed that such things happen, but have produced no evidence, just assertions mingled with stock footage of fetuses. [Paul Krugman, New York Times].

Republican debate, Paul to Jebbie on marijuna: “In the current circumstances, kids who had privilege like you do don’t go to jail, but the poor kids in our inner cities go to jail. I don’t think that’s fair. And I think we need to acknowledge it” [Vox].

“‘We have a problem in this country. It’s called Muslims,’ an unidentified man who spoke at a question-and-answer town hall event in Rochester, New Hampshire asked the mogul at a rally Thursday night. ‘You know our current president is one. You know he’s not even an American'” [CNN].

A seemingly bewildered Trump interrupted the man, chuckling, “We need this question. This is the first question.”

“Anyway, we have training camps growing where they want to kill us,” the man, wearing a “Trump” T-shirt, continued. “That’s my question: When can we get rid of them?”

The high-pitched warbling sound seems to have thrown Trump off his stroke. Or not!

Sanders on the above exchange:  “This nonsense has got to end.” [@BernieSanders].

Kasich, of Hispanics: “That’s why, in a hotel, you leave a little tip, you know?” [Columbus Dispatch]. I know Kasich is trying to be nice…

Biden insider and Draft Biden operative Joe Alcorn, overhead on Amtrak, presumably accidentally “I am 100 percent that Joe is in” [National Review]. Yes, but in what? Anyhow, that’s why the sensible people take the quiet car: To avoid loudmouthed buffoons yammering into their cellphones about matters of no importance to anyone but themselves. Apparently, Alcorn didn’t reveal a reason for Biden to run. Odd, that.

Leading Indicators, August 2015: Growth isn’t likely to pick up any steam going into year-end, at least based on the index of leading economic indicators which came in at only plus 0.1 percent in August following a revised no change reading for July.  [Econoday]. “Working hours are down and new factory orders have been weak.” Crazy talk. This is the greatest recovery ever. Slow and steady, to be sure, but still the greatest.

Puerto Rico: “On Capitol Hill however, the imminence of the first U.S. VAT tax [as part of Puerto Rico’s five year planf for fiscal sustainability] is only now becoming common knowledge. Whether its existence provides some leverage for the island to extract bankruptcy protection from Capitol Hill or whether it will just trigger negative consequences from the Republican leadership has yet to be decided [Market News]. Why wouldn’t the Hill like it? It’s regressive.

The Fed: Tim Duy called it, though granted, on the morning [Economists View].

IRS refused to give advance blessing to Yahoo plan to spin off Ali Baba [Bloomberg].

Positive Change, the report of [The Ferguson Commission].

“Constitutionally, Slavery Is No National Institution” [Sean Wilentz, New York Times]. Well, except for the three-fifths of a man thing. “Yeah, the Dred Scott decision… I can see if going either way!”

“The Wall Street Journal reported last week that officials in Abu Dhabi were trying to understand why a $1.4 billion transfer that the fund, 1Malaysia Development Bhd., said it made to a counterparty in the Middle Eastern emirate wasn’t received. Now, those officials are questioning a further $993 million that 1MDB reported it paid to the Abu Dhabi fund, the International Petroleum Investment Co., but which also appears to be largely missing, people familiar with the matter said” [Wall Street Journal, “Malaysia Fund 1MDB’s Missing Money Problem Grows”]. To lose one billion may be regarded as a misfortune. To lose two looks like carelessness.

“Labour Donor Assem Allam Says He Will Fund Breakaway MPs To Defect From Jeremy Corbyn” [HuffPo]. Admirably simple and direct tactics. And they certainly worked with the Blairites!

“For many journalists, Twitter remains the go-to source for following along with breaking news and major events in the world in real time. If there’s a major story, you can usually count on tweets being embedded inside the text. But Facebook desperately wants some of that spotlight” [The Verge]. “Signal starts by showing news gatherers what’s trending across the social network, and allows them to dig into public posts (in “unranked, chronological order,” Facebook notes).:” I can’t believe that it’s anything other than loathesome, but I suppose I’ll have to look at it…

“One of the influences that is said to be important for John McDonnell (the new shadow Chancellor) and his advisors is Modern Monetary Theory (MMT).” [Mainly Macro].Can’t find confirmation. Readers?

“It is no surprise that Corbyn has faced trenchant hostility from the Tory and Murdoch press since they oppose the politics he espouses. This week, however, even the coverage of him on the supposed fair or left of centre media has been over the top. Frankly, some of it has been disgraceful and undemocratic. It is as if the Oxbridge university elites, who dominate much of Britain’s political media, as they do much of Britain’s establishment politics, have determined that Labour is not entitled to elect a leader of his views” [IrishTimes]. “As if”?

“[T]e best satire kicks against the strong, not the weak – given the volume and virulence of the establishment attacks being directed at him, Corbyn clearly falls (in satire terms at least) into the latter category. It’s revealing that one of the most popular cartoon images of the Labour leader so far doesn’t depict him with Y-fronts over his trousers or a mad, staring eye, but as Obi-Wan Kenobi. Venerable, wise, unflappable, soon to be destroyed by the forces of darkness, but whose spirit will live on. Satire will find worse to throw at Corbyn, but – for him, at any rate – that’s a pretty encouraging start” [Guardian].

“Jeremy Corbyn predicted that the Euro would lead to ‘a bankers’ Europe'” [Independent]. Well, he got that right, didn’t he?

“Top Ten Ways That Iran Hawks Became Their Own Worst Enemies” [Lobe Blog]. Familiar to anyone who’s paid attention for the last decade or so, but impressive when collected in one place.

If Ahmed the clock student had been in Yemen, he probably would have been whacked by one of Obama’s drones in a “signature strike” [Gawker]. Because, when you think about it, that’s what all the mouthbreathers in Irving were advocating when they would say stuff like “a circuit board looks like a bomb, so what’s the problem?” Signature strikes. With, naturellement, skin color and religion being part of the signature.

Pentagon’s top weapons tester on #FAIL-35:  “Not only did the six F-35Bs used in the demonstration, referred to by the Marines as Operational Test 1, fail to achieve the number of required flight hours necessary to be declared combat-ready, but, in fact, the DOT&E found the trials, “did not — and could not —demonstrate that Block 2B F-35B is operationally effective or suitable for use in any type of limited combat operation, or that it was ready for real-world operational deployments, given the way the event was structured” [CNN]. ZOMG. The Marines ran a dog and pony show for “distinguished visitors”? Say it’s not so!

“Aerospace nation“: “How the Air Force Association and various Air Force officials refer to the collective culture around the military aerospace community” [Ars Technica]. “If you were to accidentally stumble into the Air Force Association’s Air & Space Conference, wrapping up here on Wednesday, without any sort of context whatsoever, you might think you’d landed in the midst of something between a very large family reunion and a mild-mannered evangelical tent meeting. That is, until you saw the static displays of bombs and drones and aircraft mock-ups in the exposition hall.” In another age, we’d simply say “mercenaries.”

“But a birthday cake loaded with diamonds and hand-sculpted fondant just smashed the record for the most expensive dessert ever created” [CNBC]. $75 million:

It took more than 1,100 hours to make, since all of the tiny edible figurines were hand-sculpted with [British designer Debbie] Wingham’s couture clothing and accessories, including sunglasses and handbags.

But much of the value [sic] comes from the bling. The cake has 4,000 diamonds, including a 5.2-carat pink diamond, a 6.4-carat yellow diamond and 15 five-carat white diamonds. Those 17 stones alone are worth more than $45 million.

And that, my friends, is the story of aggregate demand today.

“What I Wear to Work: Nayssan Properties’ Jay Ezra Nayssan”  [Bloomberg]. Nayssan: “I try to express myself through objects with history.” Unlike the workers on-site. Or, alternatively, like them.

An amazing must-read on the trailer where Dylann Roof stayed [Washington Post]. Plenty of trailers in rural Maine like this. Talk about intersectionality….

“The white-man effect: How foreigner presence affects behavior in experiment” (abstract only) [Journal of Economic Behavior and Organization].

“About 2.3 million people applied for the 368 jobs with the government of Uttar Pradesh. Hundreds of candidates with doctorates and other advanced degrees applied for the jobs that pay about 16,000 rupees ($240) a month and require a fifth-grade education” [AP]. Underemployment not unique to the US, I guess.

“Why a resurgent, unapologetic left is on the rise globally” [Matt Yglesias, Vox]. “[A] large younger generation of progressive voters are demanding a less apologetic approach that does more to hold to account the cross-party conventional wisdom that led the world into economic disaster early in the 21st century.” And some old codgers too — accepting, arguendo, Yglesias’s sloppy analysis, which assumes that generations have agency. 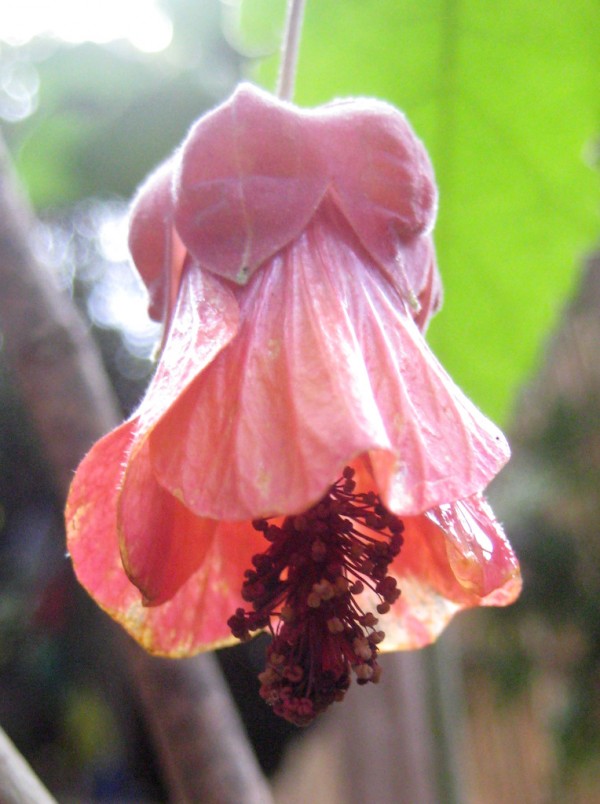 An Abutilon from Kurt’s back yard.