Yves here. I’m skeptical of the idea of a “historical index” since the idea of happiness as a goal is very much tied to cultural norms, which have in turn been shaped by advertising (see the important Adam Curtis series “Century of the Self” for an in-depth treatment). For instance, crudely speaking, Ancient Rome had two ideas for the well-lived life, one the Stoic, that contentment was found in the performance of one’s duty, the other, the Epicurean, which was to seek to cultivate equanimity by avoiding hassles (as in disagreeable people, circumstances) and finding pleasant company and surroundings. I welcome experts to provide input, but my impression based on my limited reading is neither would have placed much stock in the giddy high that most Americans equate with “happiness”.

Given the social pressure in America to be or at least appear happy, I doubt self-reporting of happiness. But what I find striking about the data below is despite the fact that America is increasing obsessed with happiness, if you look at the charts below, we in the US have done a lousy job of achieving it, even with all sorts of medication to blunt unhappiness plus the high odds of happiness grade inflation. And the results also indicate that the French were much happier on the eve of the Revolution than now. That presumably reflects sample bias, in that the educated French, a small subset of the population, were the ones writing books.

With records of subjective wellbeing going back less than half a century, this column asks if we can know the impact of key past events on the happiness of our ancestors. It presents a new historical index that draws on millions of digitised books in the Google Books corpus of words using sentiment analysis. The index – which goes back to the 1776 US Declaration of Independence, 200 years earlier than any other index of happiness – makes it possible to analyse the historical drivers of happiness in France, Germany, Italy, Spain, the UK and the US.

Calls from UK Prime Minister David Cameron, the United Nations’ World Happiness Report, the OECD’s Better Life Index, along with psychologists and economists, all reflect on the need to develop a better understanding of subjective wellbeing (‘happiness’). Though many contemporary economies have tracked crime, education and economic production for the best part of a century, subjective wellbeing only began to become a staple of world economic indicators in the 1970s.

Calls from UK Prime Minister David Cameron, the United Nations’ World Happiness Report, the OECD’s Better Life Index, along with psychologists and economists, all reflect on the need to develop a better understanding of subjective wellbeing (‘happiness’). Though many contemporary economies have tracked crime, education and economic production for the best part of a century, subjective wellbeing only began to become a staple of world economic indicators in the 1970s.

Unlike national income accounting, which initiated the collection of GDP in the 1930s, subjective wellbeing is a rather young indicator. Though there have been successful projects to roll back GDP (e.g. Bolt and van Zanden 2014, Broadberry 2015), attempts to construct historical series for wellbeing have been notably lacking. Without such a series, we are left wondering how wellbeing responds to key historical events, such as expansionary monetary policies, education and longevity.

But if constructing historical series for wellbeing makes sense, how can we extend existing measures when direct survey evidence was only initiated in the 1970s? The key insight in our new research paper (Hills et al. 2015) is that language conveys sentiment, and that the growing availability of digitised text provides unprecedented resources to construct a quantitative history of wellbeing based on historical language use.

In particular, the foundation of our work involves combining multiple large collections of texts of natural language going back two centuries with state-of-the-art methods for deriving public mood (i.e. sentiment) from language. The recent digitisation of books, newspapers and other sources of natural language – such as the Google Books Ngram database – represent historically unprecedented amounts of data (‘big data’) on what people thought and wrote over the past few centuries (see Michel 2011). These databases have already proved fruitful in detecting large-scale changes in language, which in turn correlate with social and demographic change, for instance in Hills and Adelman (2015).

In the approach we take, sentiment measures are based on valence norms for thousands of words. These already exist in the literature and are collected from a large group of individuals who are asked to rate a list of words on how those words make them feel (e.g. Gilbert 2007). In the present case, valence norms based on the affective norms for English words have already been collected for five languages: English, French, Spanish, Italian, and German.

We applied these norms to the Google Books corpus for each of these languages, allowing us to derive a new index for subjective wellbeing going back to 1776, which we tentatively call the HPS index. An initial comparison with subjective wellbeing collected with survey data is shown in Figure 1. The data reflect the residuals after controlling for country fixed effects and clearly show a strong and significant correlation with our measure based on historical language.

Figure 1. Comparison between survey measures of life satisfaction and residuals (after controlling for country fixed effects) for our measure based on sentiment from historical text. 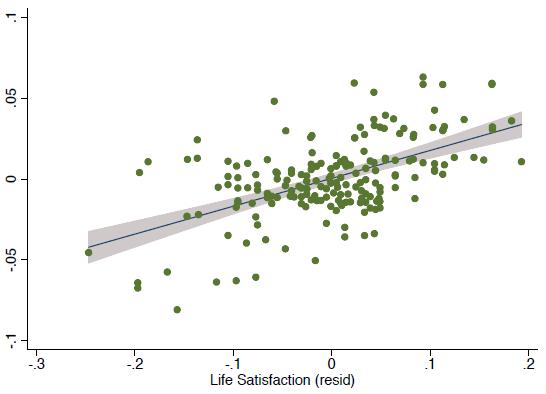 Rolling the text-derived measures of subjective wellbeing back to 1776 reveals a quantitative picture of how public sentiment has changed across the six countries we considered: France, Germany, Italy, Spain, the UK and the US. Though we make clear in our research that we need to exercise caution when examining very long-run trends (as language itself has evolved so much), it is nonetheless clear in Figure 2 that short-term events, such as the exuberance of the 1920s, the Depression era, and World Wars I and II show clear and distinguishable influences on subjective wellbeing. 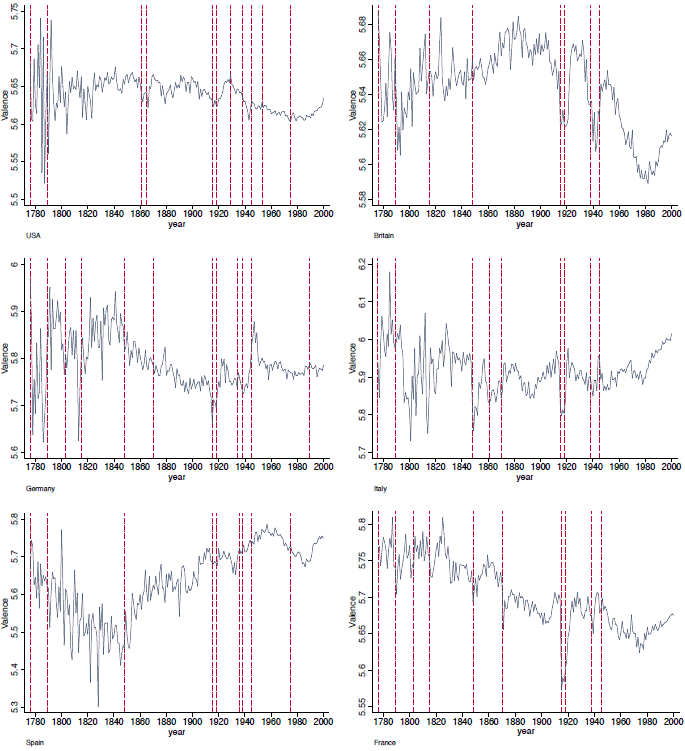 Why is a Quantitative History of Wellbeing Important?

The fledgling state of wellbeing data has limited our collective ability to understand how wellbeing responds to different historical events. This has in turn limited the use of wellbeing in public policy, health initiatives and financial decision-making. In practice, if subjective wellbeing is to become a key factor in guiding our collective behaviour, then we need accounts of wellbeing on a par with those of GDP.

Using wellbeing as a measure to guide behaviour, however, takes more than the desire to simply improve wellbeing. As noted by Gilbert (2007), people have problems understanding so-called ‘affective forecasting’ – the ability to understand how one will feel in the future – and with this also comes a limited capacity to understand how prior events and decisions influenced our past happiness.

To overcome this, especially at the government level, we must develop our capacity to predict how wellbeing responds to both deliberate and unexpected events. Better predicting economic fortunes was the motivation of the national income accounting, which later became GDP, following the Depression in the 1930s. Of course, now numerous decisions are based on GDP, despite a near global acceptance that, in the words of John F Kennedy, “it measures everything in short, except that which makes life worthwhile” (Presidential Library and Museum, North Dakota).

Thus, as with GDP, governments and other agencies recognise the importance of this additional ‘emotional accounting’ and, by all accounts, they want to understand how better to use it to improve future wellbeing. But to do that we need historical informed accounts of what this means, and our index represents a first attempt.