Dave here. Well-articulated points, the book sounds like it could be a good primer for newbies.

By David Kotz, a professor of economics at the University of Massachusetts-Amherst and the author of The Rise and Fall of Neoliberal Capitalism (Harvard University Press, 2015). This is the first installment of a two-part series based on his book. Cross-posted at Triple Crisis.

Part 1: What is Neoliberal Capitalism?

“Neoliberalism,” or more accurately neoliberal capitalism, is a form of capitalism in which market relations and market forces operate relatively freely and play the predominant role in the economy. That is, neoliberalism is not just a set of ideas, or an ideology, as it is typically interpreted by those analysts who doubt the relevance or importance of this concept for explaining contemporary capitalism. Under neoliberalism, non-market institutions – such as the state, trade unions, and corporate bureaucracies – play a limited role. By contrast, in “regulated capitalism” such as prevailed in the post-World War II decades – in the United States and other industrial capitalist economies – states, trade unions, and corporate bureaucracies played a major role in regulating economic activity, confining market forces to a lesser role.

A few clarifications are in order. First, capitalism cannot function without a state. After all, private property is a creation of the state, and market exchange requires contract law and associated enforcement that can only be provided by a state. However, in neoliberal capitalism the state economic role tends to be largely confined to protection of private property and enforcement of contracts. In regulated capitalism the state’s economic role expands significantly beyond those core functions of the capitalist state.

Second, the dominant role of market relations and market forces in neoliberal capitalism is embodied in a set of institutions and reinforced by particular dominant ideas. The transition from regulated capitalism to neoliberal capitalism starting in the 1970s was marked by major changes in economic and political institutions. This will be explored below.
Third, the institutions of neoliberal capitalism, while promoting an expanded role in the economy for market relations and market forces, simultaneously transform the form of the main class relations of capitalism. Most importantly, the capital-labor relation assumes the form of relatively full capitalist domination of labor. This contrasts with the capital-labor compromise that characterized the regulated capitalism of the post-World War II decades. Neoliberalism also brought change in the relation between financial and non-financial capital, as will be considered below.

Economic Developments in the Neoliberal Era

The most talked about economic development in the neoliberal era is rapidly rising inequality. While Thomas Piketty’s now-famous book, Capital in the 21st Century, documented the relentless rise of the income share of the top 1%, he did not provide a convincing explanation of that development. The neoliberal form of capitalism supplies a clear explanation. As neoliberal restructuring undermined labor’s bargaining power, the real wage stagnated while profits rose rapidly. Figure 1 shows the big gap after 1979 between the growth rate of profit and of wages and salaries (which include managerial salaries). That gap jumped sharply upward after 2000. Another feature of neoliberal capitalism, the development of a market in corporate CEOs, drove CEO pay in large corporations up from 29 times that of the average worker in 1978 to 352 times as great in 2007. 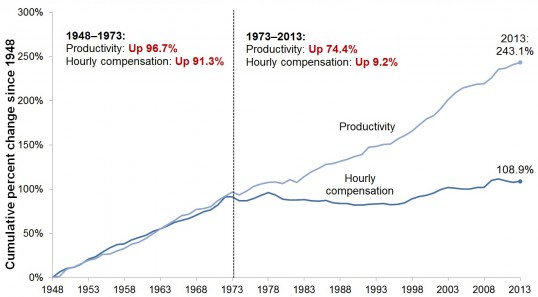 My new book The Rise and Fall of Neoliberal Capitalism explains in detail how the institutions of neoliberal capitalism account for two other important economic developments since 1980. One was the transformation of the financial sector from a stodgy provider of traditional loans to businesses and households and the sale of conventional insurance into speculatively oriented companies that developed a series of highly risky so-called “financial innovations” such as sub-prime mortgage backed securities and credit default swaps. The most important cause of this change in the financial sector was its deregulation, a key part of neoliberal restructuring, starting with the first bank deregulation acts of 1980 and 1982 and culminating in the last such act in 2000. A contributing factor was the intensifying competition of neoliberal capitalism, which drove financial institutions to more aggressively seek the maximum possible profit, which for financial institutions always involves moving into speculative and risky activities.

Second, a series of large asset bubbles emerged, one in each decade. The 1980s saw a bubble in Southwestern commercial real estate, whose collapse sank a large part of the savings and loan industry. In the second half of the 1990s a giant stock market bubble arose. And in the 2000s a still larger bubble engulfed US real estate. The preceding period of regulated capitalism had no large asset bubbles. The rapidly rising flow of income into corporate profit and rich households exceeded the available productive investment opportunities, and some of that flow found its way into investment in assets, tending to start the asset price rising. The eagerness of the deregulated financial institutions to lend for speculative purposes enables incipient asset bubbles to grow larger and larger.

Neoliberalism and the Crisis of 2008

The three developments noted above – growing inequality, a speculative financial sector, and a series of large asset bubbles – account for the long, if not very vigorous, economic expansions in the US economy during 1982-90, 1991-2000, and 2001-07. The rising profits spurred economic expansion while the risk-seeking financial institutions found ways to lend money to hard-pressed families whose wages were stagnating or falling. The resulting debt-fueled consumer spending made long expansions possible despite declining wages and slow growth of government spending. The big asset bubbles provided the collateral enabling families to borrow to pay their bills.

However, this process brought trends that were unsustainable in the long-run. The debt of households doubled relative to household income from 1980 to 2007. Financial institutions, finding limitless profit opportunities in the wild financial markets of the period, borrowed heavily to pursue those opportunities. As a result, financial sector debt increased from 21% of GDP in 1980 to 117% of GDP in 2007. At the same time, financial institutions’ holdings of the new high-risk securities grew rapidly. In addition, excess productive capacity in the industrial sector gradually crept upward over the period from 1979 to 2007, as consumer demand increasingly lagged behind the full-capacity output level. All of these trends are documented in The Rise and Fall of Neoliberal Capitalism.

The above trends were sustainable only as long as a big asset bubble continued to inflate. However, every asset bubble eventually must burst. When the biggest one – the real estate bubble – started to deflate in 2007, the crash followed. As households lost the ability to borrow against their no longer inflating home values, consumer spending dropped at the beginning 2008, driving the economy into recession. Falling consumer demand meant more excess productive capacity, leading business to reduce its investment in plant and equipment. The deflating housing bubble also worsened investor expectations, further depressing investment. Finally, in the fall of 2008 the plummeting market value of the new financial securities, which had been dependent on real estate prices, suddenly drove the highly leveraged major commercial banks and investment banks into insolvency, bringing a financial meltdown.
Thus, the big financial and broader economic crisis that began in 2008 can be explained based on the way neoliberal capitalism has worked. The very same mechanisms produced by neoliberal capitalism that brought 25 years of long expansions were bound to eventually give rise to a big bang crisis.