By Perry Mehrling, a professor of economics at Barnard College. Originally published at his website.

The Office of Financial Research is out with a new “Reference Guide to U.S. Repo and Securities Lending Markets” which collects together in one place most of what is known, and draws some attention to how much is not known, about this key bit of monetary infrastructure.

Kudos to the authors for treating repo and securities lending in the same document, since in practice they do much the same thing.  Repo is structured as a simultaneous purchase and forward sale of a security:  on the first leg cash goes one way and securities go the other, while on the second leg the flows are reversed.  Securities lending against cash collateral involves much the same pattern of flows, and thus offers an alternative way of doing the same thing.

What we know about the system mostly comes from the reporting of the primary dealers who do regular business with the Fed, reporting that arises originally from the Fed’s concern for ensuring liquidity in the Treasury debt market.  We also now know a lot about the tri-party repo market, as a consequence of its role in the financial crisis.

What we do not know much about is the bilateral repo market, and anything involving non-primary dealers.  In particular, though the report only hints at this, we don’t know much about the offshore repo market.  Presumably the OFR is relying on the work of analogous financial research bodies in London, which will then have to be integrated in order to get a picture of the entire system.  For now, however, it remains a black box.

One important thing I long assumed to be true is confirmed by the report.  The repo haircut, which is the difference between the market value of the security and the size of the cash loan, is NOT appropriately understood as compensation for credit risk.  Here is the key passage:

“The events of the 2007-09 financial crisis revealed that cash investors, especially those whose decision-making is tied to corporate governance procedures, do not dynamically adjust haircuts when counterparty credit risk rises, but rather request higher quality collateral or limit their repo investment activities to higher quality counterparties.” (p. 42)

The report emphasizes the danger of fire sale in the contraction, i.e. price volatility.  The idea seems to be that the shunned counterparties will be forced to sell the shunned collateral, for whatever price induces some other holder of cash reserves to buy.  In this way the fleeing cash investors get the cash they want, at the expense of the shunned counterparty and to the benefit of some other cash holder who jumps into the fray to get a bargain.   Maybe, but also maybe not.

From a money view perspective, the problem is rather one of refinance.  When one class of cash investors turn away from a category of collateral or counterparty, it is unlikely that another class of cash investor will be willing to part with their own cash hoard, accumulated against exactly this moment.  What is needed at such a moment is a source of additional cash, an entity issuing its own cash liabilities and using the proceeds either to lend to the shunned counterparty or to acquire the shunned collateral.  Credit quantities, not prices, are the answer, and that depends in the first place on a robust lender/dealer of first resort system.

According to the report, one idea about how to avoid fire sales is to eliminate the current exemption from the automatic stay in bankruptcy that currently allows repo creditors to grab the security collateral and sell it.  (Remember, repo is constructed as a paired security purchase and sale, so after the first leg the cash investors actually own the securities.)  But so far as I can see, probably that would be the end of repo.  (See an earlier related post here.)

What cash investors want is cash, not securities, even securities that they can sell in the event their counterparty fails to deliver promised cash on the second leg of the repo.  I am reminded of a well-known bit of market wisdom I first heard from Richard Comotto.  “Sometimes it is good business to accept dodgy collateral from a good counterparty; it is never good business to accept even first-class collateral from a dodgy counterparty.”  Cash investors do not want to be secured creditors, even if that puts them at the front of the line in bankruptcy proceedings.  They want cash.  If repo is just secured credit, not cash, they won’t invest in the first place.

So maybe we can do without the repo market?

The great contribution of this report is to make abundantly clear how crucial a functioning repo market is to the larger financial system.  For my money, the most important figure is Figure 7, which shows schematically the balance sheet of the dealer system: 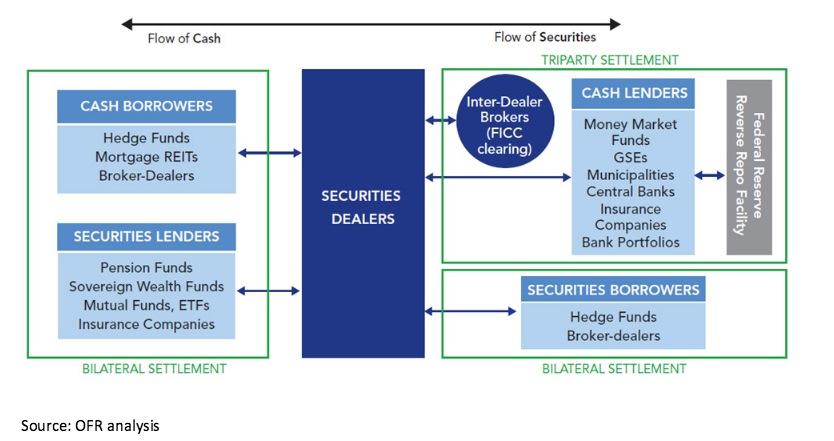 The hierarchical character of the system is clear in this figure.  Security dealers borrow cash from cash lenders of various kinds, who insist on channelling that cash through the tri-party repo system because of the extra security it offers them.  And security dealers lend cash to cash borrowers of various kinds, using the bilateral repo system because of the extra flexibility to repledge the securities that they acquire.  Cash flows through dealers in one direction, and collateral flows through them in the other direction.

And that brings us to the main point.  The primary dealers are the core of the lender/dealer system of first resort that we have relied on in the past to absorb liquidity shocks of various kinds.  If cash investors shun particular collateral or particular counterparties, dealers take over that business (for a price), expanding their own balance sheets on both sides.  If dealer liabilities, maybe even repo liabilities, are acceptable to cash investors, then we are done.  No fire sale, just refinance.

Of course this is the system that failed during the financial crisis, leading to reliance instead on the Fed as lender/dealer of last resort.  The question on everyone’s mind is whether the institutional changes since the crisis, some of them in response to regulation, have delivered a more robust dealer system, or a more fragile one.  The bit of the system we see is better capitalized, but is it able to provide the elasticity we need when we need it?  Or will we be depending on the bit of the system we cannot see, whose resilience we have no ability to evaluate.

The statistical net focuses on primary dealers, because of their role in ensuring the market liquidity of government debt in an immediate post-war era when management of government war debt was the main challenge.  What we need today is a statistical net that rather focuses on the dealer function, on whatever balance sheet it may be found, whether officially designated primary dealer or not, whether domestic or international.   We have learned the hard way that ensuring the market liquidity of government debt is not sufficient to ensure financial stability.  We are still trying to figure out how to create a robust dealer system for the modern financial system.