Lambert here: “Giving” blood. How irrational. No good neo-liberal would ever do such a thing! And what is this curious notion of “good citizenship”?

Evidence suggests that people are more likely to behave in a pro-social way if they are aware of others who behave in such a manner. This column finds evidence for this phenomenon among blood donors. For every unit increase in a donor’s motivation, there is a 44% spillover in motivation to their fellow tenant. There is an overall increase in donation rates due to such a social multiplier of 17.9 percentage points, instead of the 10 percentage points obtained by calling an isolated donor.

Pro-social behaviour, i.e. acting voluntarily in the interest of the common good even if it comes at a personal cost, is an important part of a well-functioning society (Putnam 2000, Durlauf 2002). Donating to charity, giving time as a school board member, volunteering to help at a public event, not dropping litter, even voting in elections; it is the myriad of everyday acts of public service and good citizenship that help maintain the fabric of a productive and prosperous society. Researchers and policymakers alike have strived to understand this type of behaviour and find effective ways to promote it. Yet, despite the attention given to understanding and promoting good citizenship, it is still not clear what policy interventions are most effective.

There is some evidence from existing research, suggesting that people are more likely to behave in a pro-social way if they are aware of others behaving in a similar manner (Falk and Fischbacher 2002, Fehr and Fischbacher 2004, Frey and Meier 2004, Shang and Croson 2009). And the motivation to act pro-socially may spill over from one individual to another in social networks where individuals are linked through social ties (Granovetter 1973, Goette et al. 2006, Twenge et al. 2007, Leider et al. 2010). If pro-social motivation spills over between individuals, any intervention that affects individual motivation will feed back into the community and will have a larger aggregate effect akin to the Keynesian consumption multiplier.

In a recent paper, we address the possibility of motivational spillovers for the case of blood donations (Bruhin et al. 2015). Blood donations are another textbook example of pro-social activity. Donating blood is a voluntary act where the donor receives no material reward and bears the personal cost of giving blood, while society at large benefits from a sufficient stock of whole-blood transfusions. Many interventions to foster donation rates have previously been examined, ranging from material and immaterial incentives to different forms of appeals to donors (Ferrari et al. 1985, Goette et al. 2009, Lacetera et al. 2012, Niessen-Ruenzi 2014). Even though information about incentives seems to spread among blood donors (Lacetera et al. 2014), no evidence exists on the relevance of motivational spillovers for blood donations.

We examine the donation behaviour of donors registered with the Blood Transfusion Service of the Red Cross in Zurich, Switzerland. Our data span the period from April 2011 to January 2013, during which time donors were repeatedly invited to blood drives – time-limited events to collect blood. We focus on dyads of donors who are likely to share strong social ties, as they live at the same address and there is no more than 20 years difference in ages between them. About two-thirds of the dyads are couples living together, while the rest are other cohabitants, or neighbours living in the same building. In total, we observe 3,723 such dyads and 20,240 individual donation decisions.

One significant challenge, well known in econometrics, is isolating the impact of spillovers on the motivation to give blood as opposed to, for example, the impact of environmental factors or personal characteristics that both people in a dyad have in common (Manski 1993). If two individuals behave the same way, it may just be because they are exposed to the same environment, not because they influence each other. As it turned out, a feature of the data allowed us to solve this challenge. A random subset of donors received an additional call to their mobile phone, during office hours, two days before a blood drive, telling them their blood type was in short supply and urging them to donate. Previous research shows that donors receiving such a phone call are about 8 or 9 percentage points more likely to donate blood than donors who do not receive such a phone call (Bruhin et al. 2015).

The randomised phone call allowed us to cut through the environmental influences and to isolate the effect of motivational spillovers because it only directly impacts the motivation of the person being called and not the motivation of their fellow tenant. If the fellow tenant who is not directly affected shows an increase in her or his probability of donating following that phone call, it can be attributed to motivational spillovers. We also verified that it is really the phone call recipient’s motivation to donate that spills over, and not the information about a particular blood type being in short supply.

The resulting increase in the fellow donor’s motivation then spills back, resulting in a positive feedback loop. This positive feedback loop creates a social multiplier of 1.79 for any policy motivation that greatly enhances its effectiveness. Take, for example, the phone call intervention we used in our paper. Its effect is to increase turnout by approximately 10 percentage points if an isolated donor is called. This is also what our estimates imply from using the dataset on fellow tenants, if we ‘shut down’ the channel of motivational spillovers. When we examine how motivational spillovers change this response, we find that this amplifies the response of the donor being called, and also generates a substantial effect on the follow tenant.

Figure 1. Effect of a phone call on the called donor and his or her fellow tenant 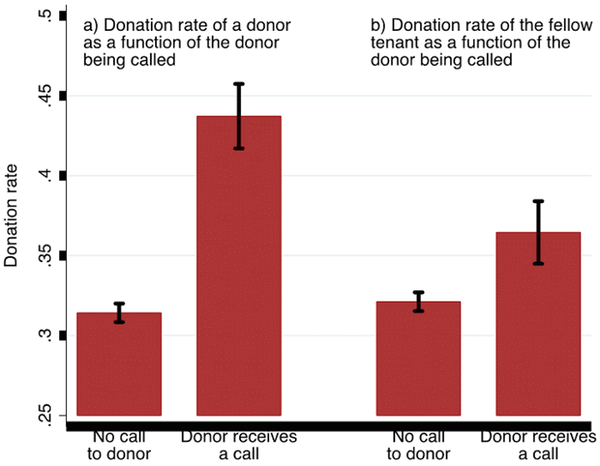 The significance of these findings extends beyond blood donations. Given that it is the motivation cascading and feeding back from one person to another, it seems feasible that the social multiplier effect might extend to other interventions within an organisation or society designed to motivate a particular type of behaviour. Therefore, those interventions would benefit from targeting social groups – project teams, or intra-organisational networks and clubs, for example. However, it is important to note that we are not claiming that such spillovers apply beyond pro-social behaviour and further research would be required to confirm a comparable social multiplier effect in other domains.

For policymakers, what our research highlights for sure is that efforts at encouraging good citizenship, whatever the particular activity they are hoping to boost, should be directed at affecting the motivation of individuals in social groups. Motivational interventions targeted at couples, friends, families, club members, or church congregations, for example, are likely to be more efficient and effective than targeting independent individuals. Harnessing a network effect, by utilising social ties, policymakers can leverage the motivational impact of policy interventions designed to promote good citizenship.

Bruhin, A, L Goette, A Markovic, A Roethlisberger, R Buchli and B M Frey (2015), “Call of Duty: The Impact of Behavioural Interventions on Blood Donations.” Transfusion forthcoming.

Niessen-Ruenzi, A, M Weber and D M Becker (2014), “To Pay or Not to Pay-Evidence from Whole Blood Donations in Germany,” Working Paper.

Shang, J and R Croson (2009), “A field experiment in charitable contribution: The impact of social information on the voluntary provision of public goods,” The Economic Journal 119(540):1422–1439.