Dave here. I’m not sure I agree with the entirety of this take, but it has good data and gives a decent overview of what some economists are saying about China. It’s clear that there’s a leveraging problem in the economy.

By Alicia Garcia Herrero, a Senior Fellow at Bruegel and a non-resident research fellow at Real Instituto El Cano. She is also adjunct professor at City University of Hong Kong and Hong Kong University of Science and Technology (HKUST) and visiting faculty at China-Europe International Business School (CEIBS). Cross-posted at Bruegel.

China’s market drama started in June this year with the collapse of the Shanghai stock exchange, followed by frantic interventions by the Chinese authorities. As if the estimated $200 billion already spent on propping up stock prices were not enough, China found itself in another battle with the market, defending the RMB against depreciation pressures after the PBoC devalued the RMB by nearly 2% on August 11. The cost of the foreign exchange intervention to keep the RMB stable is estimated at $200 billion.

This adds to existing pressures on China’s international reserves, which though still extensive, have been reduced by as much as $345 billion in the last year, notwithstanding China’s still large current account surplus and still positive net inflows of foreign direct investment (Graph 1). The fall in reserves is not so much due to foreign investors fleeing from China but, rather, capital flight from Chinese residents. Another –more positive reason – for the fall in reserves is that Chinese banks and corporations, which had borrowed large amounts from abroad in the expectation of an ever appreciating RMB, finally started to redeem part of their USD funding while increasing it onshore. While this is certainly good news in light of the recent RMB depreciation, the question remains as to how much USD debt Chinese banks and corporations still hold and, more generally, how leveraged they really are a time when the markets may become much less complacent, at least internationally. 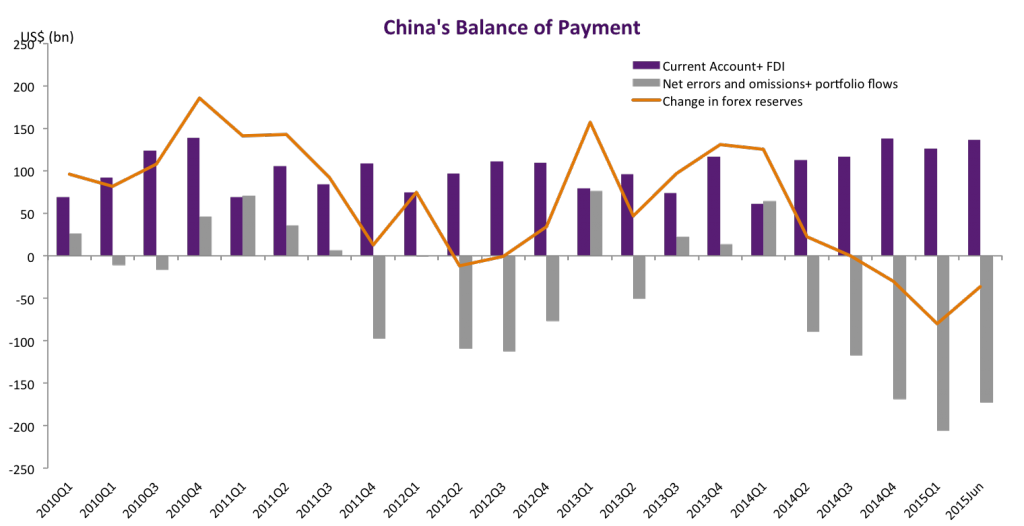 Public and corporate sector over-borrowing can be traced back to the huge stimulus package and lax monetary policies which Chinese economic authorities introduced during the global financial crisis in 2008-2009. A RMB 4 trillion investment plan focusing on infrastructure was deployed, but the real cost spiralled. The government also subsidized the development of several important industries and lowered mortgage rates to boost housing demand. At the same time, the PBoC substantially loosened monetary policy with interest rate cuts, reductions in reserve requirements and even very aggressive credit targets for banks.

According to the authorities’ initial plan, the funds needed for the stimulus package would come from three sources: central government, local governments, and banks, with costs shared relatively equally. However in practice, given their limited fiscal capacity, local governments had to turn to banks to meet their borrowing needs. Banks could not decline loan requests from central or local government because of government ownership and control over most banks. In the meantime, government subsidies for specific industries boosted credit demand as firms in these sectors sought to take advantage of policy support and expand their production capacity. Mini-stimulus packages have since become the new norm of China’s economic policy. When growth started to slow in 2012, the authorities responded by rolling out more infrastructure projects to revive the economy, which has blotted China’s consolidated deficits every year since 2008. Although no official statistics exist on this, our best estimate is 8-10% fiscal deficits with the corresponding increase in public debt every year (fig. 2). 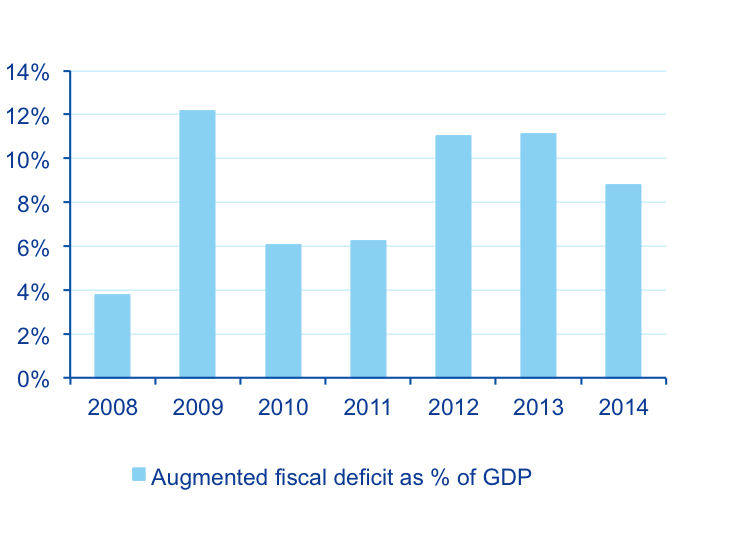 All in all, China’s public debt today is above 53% of GDP, according to the National Audit. This may look small by international standards, especially in the developed world, but the rate of debt growth is unmatched elsewhere, and is even higher than Japan with its recurrently large fiscal deficits (fig. 3). 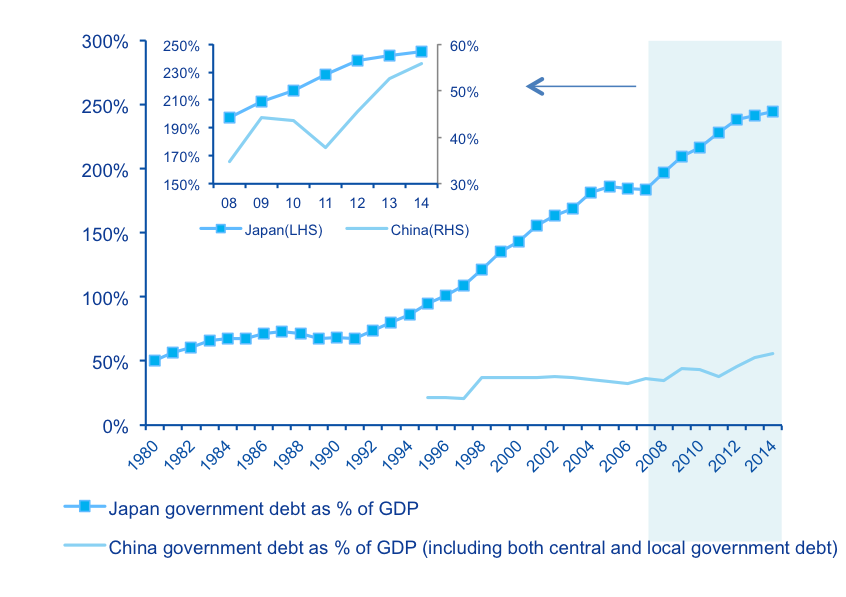 On the corporate side, cheap money at home made it very – if not too – easy for companies to borrow. In fact, corporate debt has doubled as a percentage of GDP in the last 14 years. Beyond the stock of debt, its service is becoming an issue for corporations as the Chinese economy decelerates and their revenues are on the wane. Taking a very simple measure of stress in debt service, the ratio of EBITDA to interest expense has been below 1 for about one third of Chinese domestically-listed corporates, implying that their operating cash flow was insufficient to service their interest payments. This is especially the case for private ones (fig. 4). 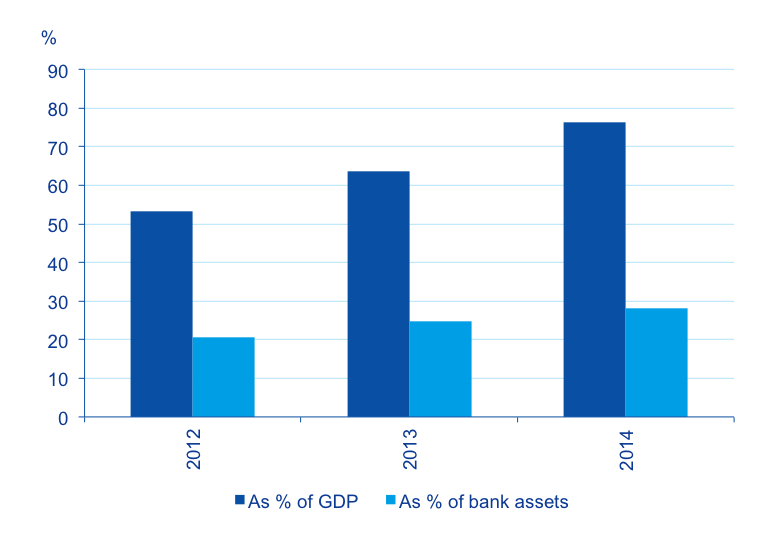 Given that banks’ balance sheets have not been able to accommodate the borrowing from both the public and the private sector, a significant share of the corporate sector, especially smaller corporations, has increasingly used the shadow banking sector to meet their financing needs and circumvent tightening regulations on bank loans (Graph 5). This hardly regulated part of the financial sector now constitutes nearly 30% of GDP, with a good amount of inherent risk.

Figure 5 – Shadow banking has become an important source of financing 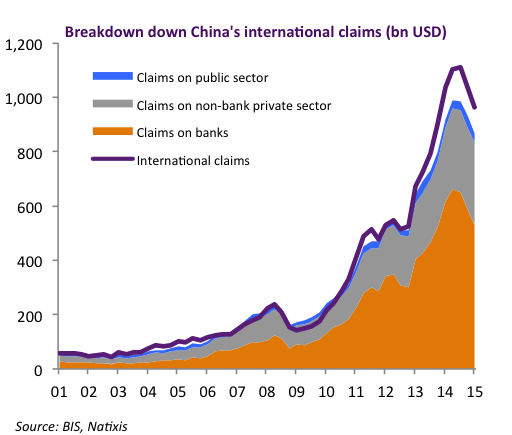 By the same token, the FED quantitative easing coupled with a cheap dollar and the expectation of continuous RMB appreciation made it even easier to borrow from overseas and, to a large extent, from international banks. In fact, the exposure of Chinese banks and corporates to dollar debt has ballooned in the recent years, only correcting very recently in anticipation of FED hikes and the recent RMB depreciation, as previously mentioned (Graph 6). 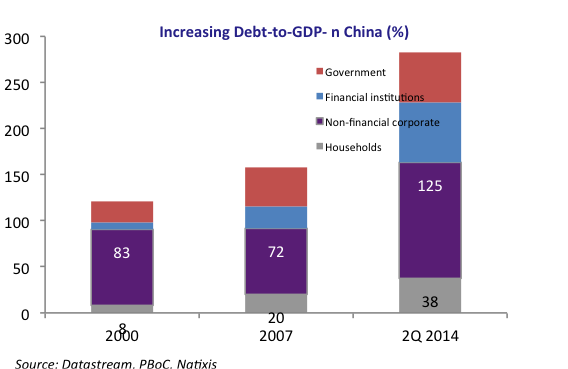 Finally, even households have not been totally spared from the leveraging mania. This can be explained by the fact that they have been confronted with an ever more expensive housing market and, more recently, the possibility to hedge massively to invest in the stock market. All in all, China’s total debt was 284% of GDP a year ago and, given the still large fiscal deficits and the leverage-fed stock market bubble – it seems likely that it may have reached 300% of GDP today. 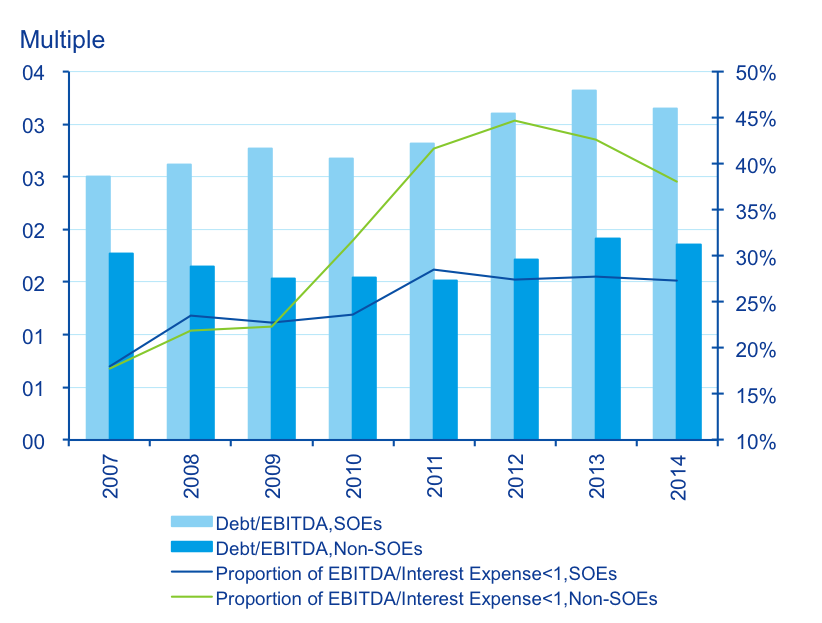 Notwithstanding its massive size compared with other emerging economies, the fact that most of it is domestic has been the key argument for the Chinese government and many economists to downplay the risks. There are, however, at least two main reasons why we should worry about China’s debt. First of all, even domestic debt has to be paid if you want to avoid huge distributional effects. In particular, local government debt will need to be cleaned up at some point, which will worsen banks’ asset quality unless the current loan for debt swap program is extended massively, which then pass the burden on the central government. Second, and more importantly, excessively high debt is known to slow growth. The underlying reason is that every unit of new credit has a harder time in finding a productive project to invest in as those which were more productive have already been funded. In fact, as Graph 8 shows, in the past the Chinese economy needed much less credit for a single unit of investment than it needs now. 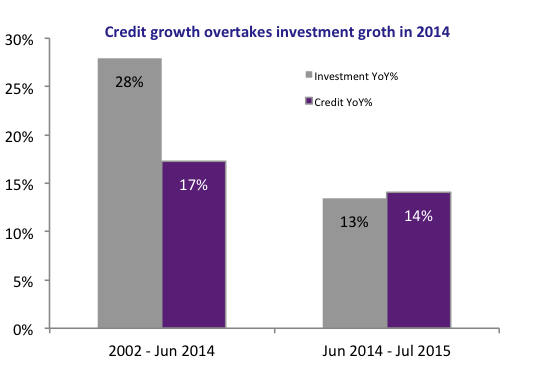 On this basis, it seems clear that China can no longer use the old recipes to stimulate its economy. This would only induce additional leveraging and China needs just the opposite. Deleveraging will be painful in the short term, as investment will have to come down even more than it has already. But then wasn’t rebalancing towards a consumption-based model what China really wanted and needed? I would advise the Chinese authorities to forget about more fiscal and monetary stimulus, and push towards deleveraging: better more pain now for more sustainable growth later.