Five years ago this month, GMAC became the first mortgage servicer to announce that they would suspend foreclosure operations, due to irregularities in their document preparation. Within a few weeks every major mortgage servicer in America followed suit. This is usually called the robo-signing scandal, but to be more precise we gave it the name foreclosure fraud. It ended with the five leading servicers, including GMAC, signing the $25 billion National Mortgage Settlement.

Except it didn’t end, and this past week I was handed inconvertible proof of that fact. The scenario is so fantastical that if I didn’t have a working knowledge of foreclosure fraud I wouldn’t have believed it. But it appears to be very real.

Bill Paatalo is a former cop who worked in the mortgage industry as a loan officer and, from 2002-2008, the President of Wissota Mortgage in the Midwest. Since 2009, after experiencing his own mortgage trouble through a loan with Washington Mutual, he became a licensed private investigator specializing in securitization and chain of title analysis. He testifies as an expert witness, working with foreclosure defense attorneys and pro se litigants.

On May 15, Bill got an email out of the blue from Jamie Gerber, “team lead” for a company called Security Connections. Here’s that email: 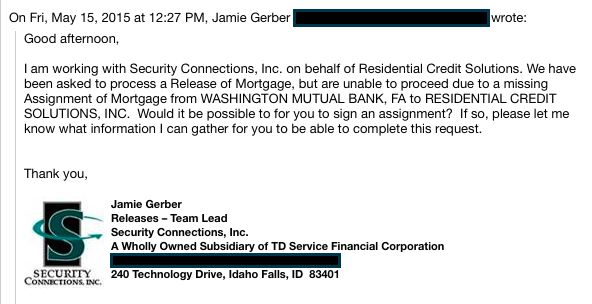 To back up, Security Connections, of Idaho Falls, ID, is a document services provider for major mortgage companies (their motto: “Bringing you peace of mind”). Bank of America used Security Connections years ago on mortgages originated by First Franklin Bank. We have this deposition of Security Connections robo-signer Krystal Hall, who admitted to signing 400 assignments of mortgage per day without knowing any underlying information about the transactions. That deposition is from November 2009, so they’ve been at this a while.

This brief description of Security Connections from job site Indeed.com helpfully explains that “if you are missing documents or need a mortgage recorded, we have a highly trained department with the skills to locate and record these documents.” They add:

With the implementation of many privacy laws, SCI is extremely sensitive to the needs of our clients. We understand that client-provided information supplied to us for the purpose of completing contractual obligations must be safeguarded. SCI goes the extra mile to satisfy and ease the concerns of our clients while still maintaining a low cost structure.

So this is a third party document processor, designed to give mortgage companies plausible deniability for fabricating mortgage paperwork. And they’re coming to Bill Paatalo, a known expert in fighting foreclosure fraud, to get him to forge a mortgage assignment, so Residential Credit Solutions can get clear title on the mortgage.

Why? Don’t they have their own teams of signers to do this work? When I talked to Bill about it, he noted that he has been solicited in the past to identify deficiencies in mortgage documentation, kind of like a hacker being asked to identify vulnerabilities in an IT system. This seems different – perhaps entrapment, getting Bill’s name on a forged document to prove his culpability in foreclosure fraud and ruin his credibility as an expert witness. More likely, Jamie Gerber just needed an assignment involving Washington Mutual, Googled the company, and Bill’s name came up because he has WaMu expertise.

Little did she know that Bill was pretty savvy in these matters. Here’s his response, playing dumb to reel in more information:

Bill, who never had any dealings with Security Connections before, wanted to see the Residential Credit Solutions request, because it would show their authorization to fabricate the document. RCS, by the way, just got nailed by CFPB for “failing to honor modifications for loans transferred from other servicers” and “treating consumers as if they were in default when they weren’t.” They paid $1.6 million in restitution and civil penalties. The company, specializing in servicing delinquent loans and based in Fort Worth, Texas, only has $95 million in total assets. 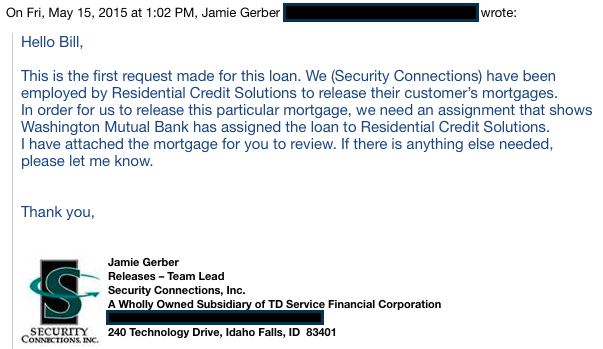 A quick note: a release of mortgage could happen when the mortgage is paid off, or could also happen in a “deed in lieu” foreclosure, where the family gets a release of mortgage and agrees to hand over the home without debt. Given Residential Credit Solutions’ profile as a delinquent loan specialist, the latter is more likely in my opinion.

RCS clearly hired Security Connections to clean up their documents. They want to acquire this property, but can’t resell it without the missing assignment, so Security Connections was asked to fill in the blanks on the chain of title. This will allow RCS to basically steal this property in a deed in lieu foreclosure, when they wouldn’t be able to foreclose on this borrower in a court, for example, without that assignment.

And as noted in the email, Jamie Gerber handed this stranger the borrower’s mortgage (actually the note), confidential information in potential violation of privacy laws. So much for “We understand that client-provided information must be safeguarded.” I won’t make the same mistake, though I will tell you that the home is in West Haven, Connecticut, and the 30-year fixed-rate loan was taken out on January 22, 2002 for $134,400. The borrower’s signature is on the note.

So Bill tries to draw out more information.

Since they just asked him to fabricate an assignment from scratch, Bill is clearly looking for some template, some example of what Security Connections does. Here’s Jamie’s reply, a couple weeks later (things must have gotten busy in Idaho Falls): 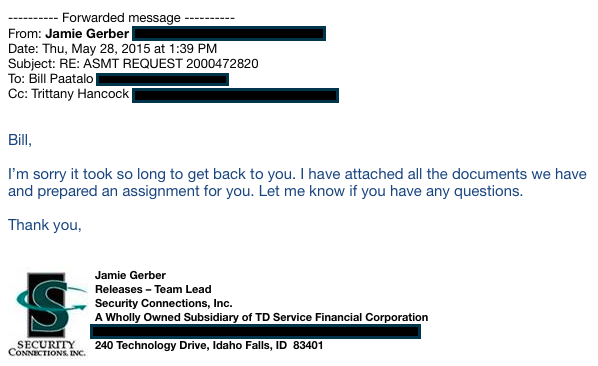 So yes, Jamie sends along a mocked-up assignment of mortgage, with blanks for where Bill can add the name “Residential Credit Solutions.” A notation under that line says “The legal description is attached hereto as a separate exhibit and is made a part hereof.” That separate exhibit would have been Bill’s responsibility. The assignment is pre-signed by Washington Mutual officials and pre-notarized, with a notary stamp. My guess would be that Security Connections is using some old assignment and repurposing it, with the recipient of the mortgage’s name to appear later. The discrepancy between the amount due on this assignment ($25,200) and the amount on the note ($134,400) helps give it away. “It was basically filling in a document that would appear as though it was done in 2002, on behalf of WaMu, which has been dead since 2008,” Bill told me. Here’s that mock assignment (I blacked out the borrower’s name): 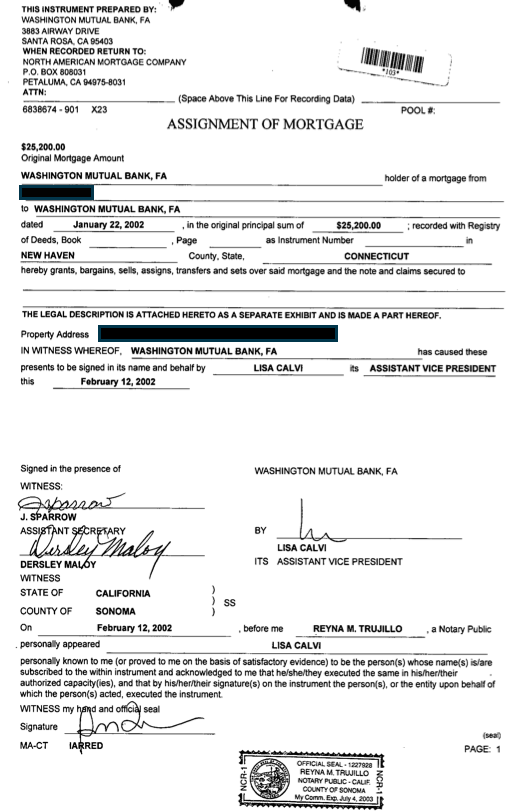 This is a solicitation to commit a felony, to fabricate a mortgage document, presented in such a way that it looks like a fairly routine practice. My suspicion is that these fake assignments allow Residential Credit Solutions to secure properties in deed-in-lieu foreclosures that they would otherwise not be able to do anything with, because they would not have a full chain of title. That’s theft, or foreclosure fraud, if you prefer.

Bill’s experience is that document fabrication continues at the same rate that it ever did. “They can sign settlements, but as long as no one is going to jail, it’s a profitable business venture,” he said. “What I believe is that nobody knows who owns what, so the only thing they can do is recreate chains of title. They’re marching this garbage into our courtrooms on a daily basis.”

Don’t hold your breath expecting anything to come of this; state and federal law enforcement washed their hands of foreclosure fraud long ago. But we should recognize that it continues unabated.