It’s getting tougher out there for our QE and ZIRP-coddled corporate junk-bond heroes.

Unisys, whose revenues and profits decline year after year and whose stock dropped from over $400 a share during the prior tech bubble to $13 a share now, withdrew its offer to sell $350 million of bonds on Friday.

The “current terms and conditions available in the market were not attractive for the company to move forward,” it said. According to S&P Capital IQ’s LCD, the five-year senior secured notes due in 2020, rated BB/Ba2, had been guided at around 8%. But buyers were leery, and they demanded more yield. They wanted to be rewarded just a little more for the substantial risk they were taking. So the notes failed to price, and Unisys withdrew the offering.

Unisys isn’t an oil company, or a mining company, or a coal company – sectors that have been eviscerated by the commodities rout and are having trouble issuing any debt at all. Unisys is a tech company.

But Unisys wasn’t the only one: It was the 15th bond offering withdrawn so far this year, according to LCD, though two of them – Fortescue Metals and Presidio – were able to pull them off later. In total, nearly $4 billion in bond offerings were withdrawn this year.

Olin Corp., which manufactures chlor-alkali products, wasn’t that lucky. It had to have the money to fund its acquisition of the chlorine products business of Dow Chemical. Its $1.5 billion offering came in two tranches: eight-year notes and 10-year notes, guided around 6.5% and 6.75% respectively. But investors sniffed at them and lost their appetite. LCD reported on Thursday that they were pushing for yields “in the mid-to-high 7% range.”

In the energy sector, the bond devastation is even worse.

California Resources – Occidental Petroleum’s spinoff of its oil-and-gas assets in California, a masterpiece of Wall Street engineering – has done nothing but burn investors in its 10 months as an independent company. When I last wrote about it ten days ago, its $2.25 billion of 6% notes due 2024, issued at par to QE-drunk investors in September last year, had plunged to 66 cents on the dollar. Now they’re at 59.5 cents on the dollar [read… A Spinoff Goes to Heck, after Just 10 Months].

Chesapeake Energy, the second largest natural gas driller in the US, is also facing the music. Two of its brethren, Quicksilver Resources and Samson Resources, have already filed for bankruptcy. When I last wrote about Chesapeake a month ago, its $1.1 billion of 5.75% notes due 2023 – that in June 2014 had been at 112 cents on the dollar – had plummeted to 70. Now they’re at 67 [read… Whose Capital Is Getting Destroyed in US Natural Gas?].

They’re in the toxic miasma of “distressed debt,” bonds that are deemed to be in so much trouble that their yields have soared to where the spread between their yields and the yield of US Treasuries has hit or surpassed 10 percentage points.

Standard & Poor’s, which tracks the “distress ratio” it its Distressed Debt Monitor, announced on September 24, that the distress ratio, after rising since late last year, hit 15.7%, the worst level since December 2011.

This chart from LCD HY Weekly shows the distress ratio of leveraged loans as measured by S&P Capital IQ LCD (blue line) and of junk bonds as measured by BofA Merrill Lynch (red line) which depicts reality in an even harsher light than Standard and Poor’s. Leveraged loans are generally secured and hold up better in a bankruptcy than bonds. But distress levels of both have recently begun to spike: 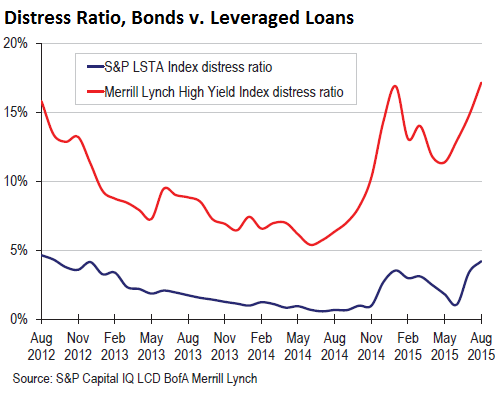 These yields that are rising to distressed levels drive up the spread between corporate bond yields and US Treasury yields. The spread is a measure of perceived risk. It had dropped to ludicrously low levels. This wasn’t a function of risk somehow disappearing from Planet Earth. It was a function of the Fed’s beating investors into submission with its zero-interest-rate policy so that they would eliminate risk as a factor being priced into their calculus. Now risk is re-inserting itself into the calculus. And look what happened.

Investors are suddenly discovering an idea – the very one the Fed in its infinite wisdom has beaten out them: they want to be compensated at least a tiny bit for taking on huge risks. And now spreads have begun tentative efforts to spike, “tentative” because history shows that they can blow through the roof: 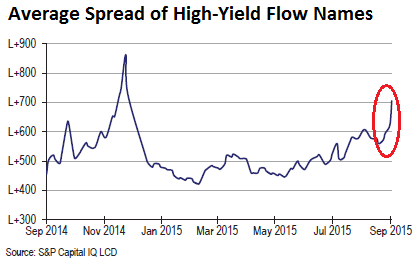 The chart by S&P Capital IQ LCD is based on LCD’s “high-yield flow names,” junk-rated companies whose bond issues are large and frequently traded. They include in alphabetical order: California Resources, Charter Communications, Chrysler, Community Health… and so on, all the way down to Sprint and Valeant Pharmaceuticals.

Rising spreads make raising money more expensive to get, and for the biggest sinners – the very companies that must get new money or fail – impossible to get. Investors will try to stay out of harms way. In this manner, spiking spreads lead to rising distress, and rising distress leads to rising defaults. And that’s when these bonds go kaboom.

But the $40-trillion US bond market is not an entity by itself. Many of these companies are publicly traded, and stockholders are at the low end of the capital totem pole. Even the lowliest, most kicked-around unsecured bondholders come ahead of them. That’s how problems in bond land tear into stocks. To get an idea where Chesapeake’s and Olin’s stocks are headed, watch their bonds.

These rising spreads – regardless of what the Fed will do in terms of flip-flopping on interest rates – is a very bearish signal for stocks. But according to our soothsayers, there should have been a big rally. Read… What the Heck’s Happening to the Global Stock Markets?