Breast cancer cases among men on the rise USA Today

Facebook blocks breast cancer post for being ‘overly sexual’ Irish Times. This is ridiculous. Manual exams are better at detecting the truly dangerous growths than mammograms. Allan: “‘Leaning In’ apparently doesn’t include proper instruction for self-exams.”

Éric Grenier’s Poll Tracker CBC. JSC: “Useful for following the numbers in the Canadian election. Their results for the unprecedented NDP victory in Alberta were quite accurate.

Sowing the Seeds of War in Uruguay Counterpunch

The Week in Review: Putin in the UN and Russian forces in Syria Une parole franche (margarita). Today’s must read.

Putin – the incredible Abou Ali Vineyard of the Saker (margarita)

How Putin will Win in Syria Counterpunch (furzy mouse). I am reminded of a line from Cate Blanchette in Elizabeth: “I do not like wars. They have uncertain outcomes.” Nevertheless. the point is that Putin seems to have a credible plan for winning and is executing well so far, which is more than the US has been able to do in our Middle Eastern nation-breaking exercises.

Obama Official Says Putin’s New War Is a Sign of American Success Daily Beast. Resilc: “We must be on fourth string JV at DoS by now.”

Why is the US Aiding and Enabling Saudi Arabia’s Genocidal War in Yemen? Counterpunch (furzy mouse)

Victory in California! Gov. Brown Signs CalECPA, Requiring Police to Get a Warrant Before Accessing Your Data Electronic Frontier Foundation

THE FBI WANTS YOUR FACE AND FINGERPRINTS WhoWhatWhy (furzy mouse). Maybe it’s time we all start wearing fake noses on a regular basis. And mole appliques.

FBI chief: ‘unacceptable’ that Guardian has better data on police violence Guardian (furzy mouse). This is laughable. We are to take this consternation seriously? The FBI has access to the same public information as the media, and they have access to at least some police databases. We are really supposed to believe that the FBI can’t do better, as opposed to it is politically not acceptable for it to show how bad things are, since it has access to more data?

Clinton proposal calls for breakup of ‘too-big-to-fail’ Reuters. OMG, the best the pro-HFT crowd can come up with is the bogus idea that this puts Commie Clinton on a path to taxing retail trades?

My Plan to Prevent the Next Crash Hillary Clinton, Bloomberg

Full interview: Dr. Ben Carson on the economy Marketplace. Resilc: “Glad i never had a brain tumor or went into a Popeyes.”

Charter School Nonsense: No, Hedge Fund Billionaires Aren’t Going to Save All the Children Diane Ravitch

Antidote du jour. I had another photo from a series sent by Diane P but neglected to include the story:

An unusual family of animals is winning hearts on Instagram. This has attracted over 77,000 followers so far by regularly sharing snapshots from the life of one man’s pets: a eccentric but tight-knit group that consists of one golden retriever, one hamster, and eight birds.

31-year-old Luiz Higa Junior of São Paulo , Brazil , tells PetaPixel that his golden retriever, Bob, is a little less than two years old. In the beginning, he just had Bob, a cockatiel and a parakeet.

“Since the beginning I put them together to see their behavior,” he tells us. “It was nice, so I decided to have them play together sometimes during my free time.”

He then added more birds and a hamster to the group, and his Instagram account has been steadily growing in popularity since. Higa’s photos show the group posing, playing, exploring, and resting together 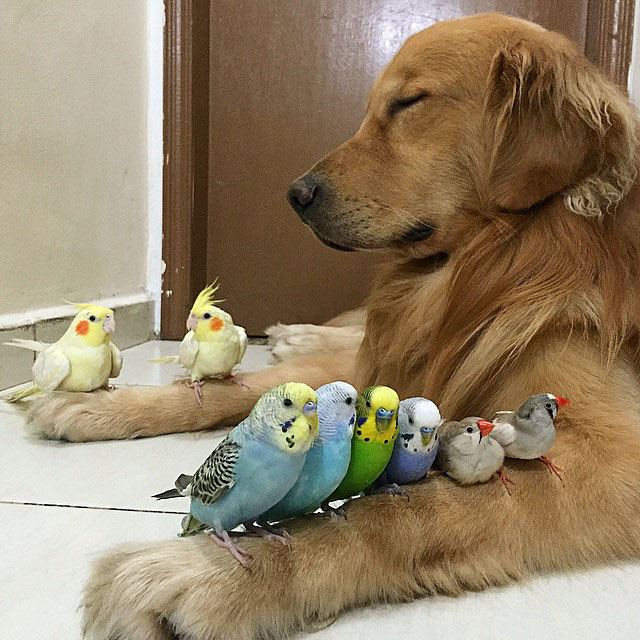