Lambert here: The article concludes with these words: “Liquidity is a latent variable and as such, policymakers are better off making extensive use of soft information and qualitative tools.” Hmm. That sounds very much like a plea — from Citi, no less — for light touch regulation. Readers?

Market liquidity is all about smooth and rapid executions of large transactions. But why is it hard to keep big markets liquid? This column looks at liquidity in fixed-income markets, assesses new trends (as well as the EU’s new market instrument rules), and makes recommendations to policymakers to avoid illiquidity – a timely reminder that the social costs of illiquidity should not be underestimated.

Market liquidity is often defined in terms of the smooth and rapid execution of large transactions. However, there is no guarantee that large and frequently trading markets will stay liquid under all circumstances. With the introduction of the EU’s Markets in Financial Instruments Directive 2, known as ‘MiFID2’, time-varying market liquidity is quickly becoming a key feature of large and deep fixed-income markets (such as the market for European government debt). For example, trade transparency rules require the regulator to provide a robust model of bond liquidity. Incorrect liquidity calibration could lead to a large number of ‘false positives’, i.e. illiquid bonds which are defined as liquid.

This matters not only for end investors, but also for market makers who ultimately provide liquidity to markets.1 Disclosing a transaction in an illiquid security exposes the dealer to liquidity risk in addition to market, credit and operational risks. Hedging liquidity risk is always problematic and often even impossible. The dealer’s rational response might vary from not quoting at all to maximising the bid/ask spread, reducing the trade size or a combination of the above.

Liquidity risk gives birth to one of the paradoxes of regulation in fixed-income markets – the aim for more transparency might depress market liquidity and distort the price-finding process, with the ultimate collateral cost of reducing transparency. Fixed-income markets mainly differ from equity markets in terms of the number of securities per issuer and the resulting fragmentation and bifurcation – the splitting in two – of liquidity.

Measuring liquidity in markets for liquid fixed-income securities is not straightforward. Based on various measures, Regesta and Tentori (2015) suggest that liquidity has been on a declining trend for some time. For example, both traded volumes in Eurex fixed-income products and the number of contracts per trade have been on a long-term declining trend (Figure 1). In contrast, we don’t have clear evidence of a change in market structure by looking at bid/offer spreads (Figure 2), which creates some degree of ‘liquidity illusion’ in our view. In fact, a more granular analysis of the limit-order book for Bund futures suggests that top-price level liquidity has declined significantly during the course of this year (Figure 3). 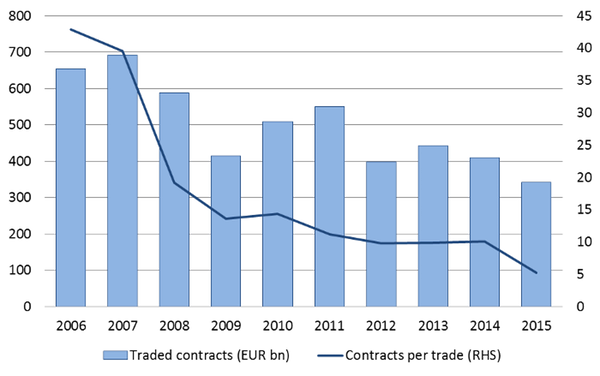 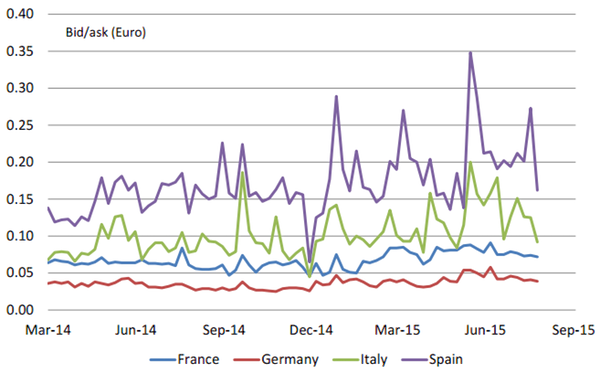 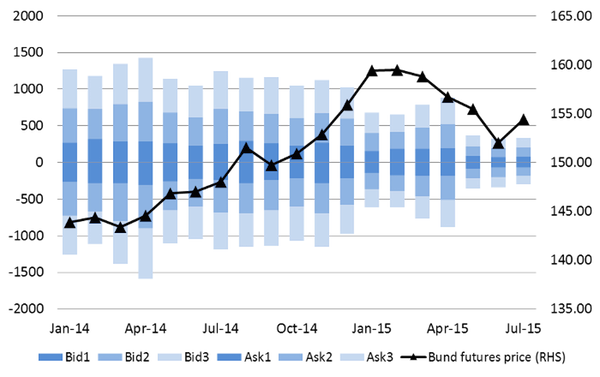 Note: Data shows the average daily sizes for Bund futures (in number of lots) available from the exchange at the top price level, i.e. the best three bids and offers.
Source: Eurex.

Analysing the Drivers of Market Liquidity

A decline in market liquidity creates major challenges not just for bond market participants (short term) but also for the financing structure of the economy (long term). We find that several forces might be having a negative effect on liquidity conditions:

Furthermore, future changes in existing risk-management rules might trigger additional pressure at the microstructure level of European government bond markets. For example, we should not assume that sovereign debt will always be treated as a zero-risk weighted asset, as is the case under Basel III regulation.

Relative to 2011, sizeable growth has come from bond funds (€566 billion) and balanced funds (€475 billion), while money market funds have suffered about €118 billion in outflows (Figure 4). The importance of fund managers as “T+1 liquidity providers” should not be underestimated. The liquidity transformation function of the asset management industry could become a systemic issue in case of large and fast redemptions. In theory, investors who invest in mutual funds have also purchased an embedded liquidity option – the fund manager has a skew towards investing in less liquid instruments, while at the same time providing quasi-ready liquidity to his investors. 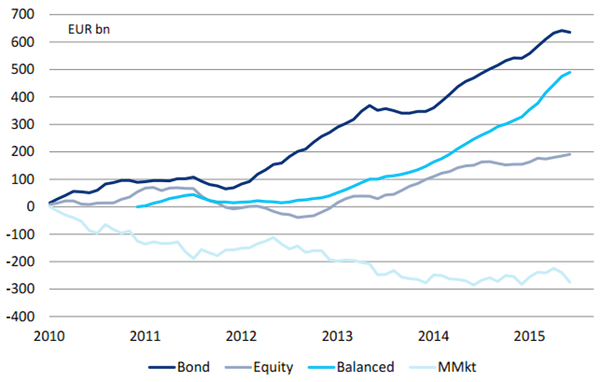 The Micro-Structure of Bond Markets

So far, so good, but why should we be concerned about liquidity issues? Liquidity is essential for the functioning of markets. A simple example illustrates the point (Tentori 2015): think of the market as a queue in which new arrivals (e.g. the primary market) and existing servers (i.e. market makers) are in equilibrium. In the case of sovereign debt, this stylised process can be described as new risk being created regularly by sovereign debt management offices – the risk is absorbed by market makers and then smoothly distributed to end investors. In order to process both new and existing risk, which is already at historical highs (Figure 5), market makers rely on customer flows (agency model) as well as on their risk limits (principal model). The ability to trade liquid instruments is essential for the hedging of large bond flows in a quote-driven market. If the regulator reduces the number of servers or fully prohibits principal trading, thus limiting dealers’ aggregate risk-processing capacity, then we might face the risk of congestion resulting in wider bid/offer spreads, lower liquidity and eventually higher yields.

Figure 5. Evolution of the market risk of European government bonds 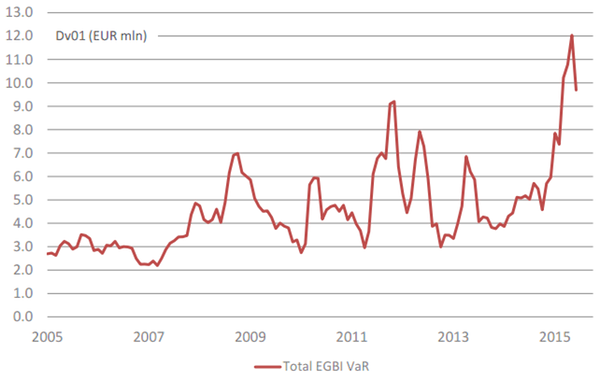 The social cost of illiquidity should not be underestimated. Theoretical models of the term structure of liquidity are being developed, but in our view we are still far from a full understanding of the price of liquidity in fixed income markets.2 In any case, we advise policymakers to consider the following three points:

Also, negative side-effects of illiquidity on policy transmission should be evaluated when optimising any given policy strategy. Loops between central banks’ liquidity and market liquidity should be carefully explored in order to prevent a decline in revenues at the industry level, which would have severe consequences for both primary and secondary market liquidity.

Fixed-income markets might already be in a negative liquidity trend. Contingency planning should also be an integral part of the preparatory exercise before the introduction of new financial regulation.

This identification problem adds a layer of complexity to trend analysis as well as cost/benefit analysis of policy innovations. Liquidity is a latent variable and as such, policymakers are better off making extensive use of soft information and qualitative tools.

Kandrac, J (2014), “The Costs of Quantitative Easing: Liquidity and Market Functioning Effects of Federal Reserve MBS Purchases”, Board of Governors of the Federal Reserve System.

Regesta, M and A Tentori (2015), “The Market for European Government Bonds: Trends in Liquidity and Market Micro-Structure”, Citi Research.

1 Duffie (2012), Longstaff (2014) and Fender and Lewrick (2015) provide us with an exhaustive description of the market making environment and the variables affecting dealers’ behaviour.