This is what you could call “camo-washing,” similar to the greenwashing that corporations employ to create an appearance of attentiveness to environmental issues. The banks bend over backwards for the benefit of members of the military they have wronged, to distract from the fact that they’re not doing the same for millions of others. It also works to enhance their public image, positioning them as sympathetic and responsible, willing to make good when they screw up.

The fraud that led Dayen to coin that term was blatant and destructive. Banks were charging impermissibly high interest rates and foreclosing on members of the military in violation of the Servicemembers Civil Relief Act And when they were caught, they went on a blitz to make up for their misconduct, including cutting mortgage interest rates to servicemembers below the levels required by the SCRA, donating homes to and creating special hiring programs for veterans, and even giving back homes that had been the subject of wrongful foreclosures and forgiving the remaining debt.

By contrast, this new sighting of camo-washing, courtesy the PEU Report, appears to be a private equity industry image-burnishing exercise, rather than to make up for actions that hurt servicemen. From PEU Report: 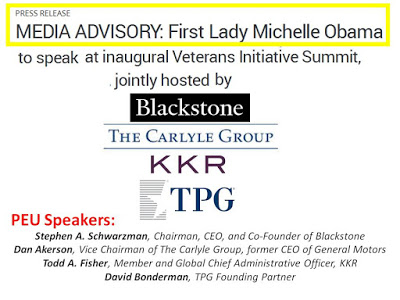 First Lady Michelle Obama will join a roundtable discussion with the hosting firms’ CEOs, senior leaders, and veterans hiring champions and deliver remarks to approximately 150 portfolio company hiring representatives at the inaugural Veterans Initiative Summit, jointly hosted by Blackstone BX, +1.23% KKR KKR, +0.44% The Carlyle Group CG, +0.11% and TPG. The sessions in which the First Lady will participate will begin at 1:00p.m. EDT on Thursday, October 8th.

But of course, that conveniently obscures a few facts. Private equity is succeeding in associating its name with hiring, even though private equity reduces employment. Worse, the most detailed study on this issue went to some lengths to understate the degree of job loss. From a 2014 post on Eileen Appelbaum’s and Rosemary Batt’s book Private Equity at Work:

One of the most striking is the authors’ discussion of an extremely extensive series of analyses on the employment impact of private equity ownership, conducted by Stephen Davis and his colleagues…

One of the most widely publicized findings out of this extensive body of work was that employment shrank at private equity owned establishments at a greater rate than in the controls over comparable two-year periods. That would seem to be no surprise. The researchers found on an establishment level, half of the job-reduction risk was due to closure of those establishments, as in consolidation of operations.

Despite these findings regarding job destruction in establishments, Davis and his colleagues concluded that employment growth in PE target companies is only slightly less than in controls. They reported that “employment shrinks by less than 1 percent at target companies relative to controls in the two years after private equity buyouts.” To reach this conclusion, they first added together the numbers of jobs gained and lost at continuing establishments, jobs lost at establishments that shut down, and jobs gained at greenfield establishments…To reach the conclusion in 2013 that job losses were less than 1 percent at PE-owned companies relative to controls, the researchers also included the effects of acquisitions and divestitures of establishments on job creation. Since PE owned companies acquire more establishments than do publicly-owned companies, this calculation reduced the employment differences between the two types of companies. “Acquired” jobs, however, are not created by private equity, but are “inherited.” Jobs are transferred from the payroll of one company to another, with no net job creation to the economy as a whole.

Now we get to a second open question: how should we regard this private equity hiring initiative? First, there are jobs for which people with military backgrounds are highly sought after, such as drug detailmen. Big Pharma has found that former members of the armed services are particularly willing to follow instructions precisely (necessary in drug sales, since the reps must hew precisely to the scripts provided by their employers) yet also be aggressive and diligent. So it isn’t at all obvious that any more veterans will be hired than would have been hired in the natural course of events.

But even if that does take place, it’s yet another reminder of the dog eat dog nature of the current job market. Normally, it would seem to be estimable to hire veterans. But with so many people un and underemployed, why should the public at large favor hiring one group over another, unless the employer was making a social contribution, say by hiring disabled vets? In other word, the private equity industry is doing a great job of playing on public sentiment (veterans = good), when the substance of what actually happens is likely to be more optical than real, save of course whatever the quid pro quo is for the Obamas. After all, funding that library is a tall order.