Sanders on TPP: “Elizabeth Warren and I will help lead the effort to defeat it” [RealClearPolitics] (Chris Hayes clip). But I’m not finding a confirming quote from Warren. Sanders out over his skis on this?

Explainer on ISDS [Monkey Cage, WaPo]. Read it all. On the sausage-making:

I would be surprised if a TPP vote in Congress really aired all the finer points of this issue. Groups concerned about ISDS will have to fight for air against all the numerous side deals being negotiated. The genius of wrapping up so many issues (from auto tariffs, to dairy quotas, to intellectual property, to regulation) in a single package is that any group or senator can usually find something to like, some goody. This is already on display, with environmental groups that dislike ISDS praising some of the TPP provisions on wildlife protection.

And so long, national sovereignty.

“Tobacco companies will be precluded from accessing the treaty’s investor-state dispute settlement mechanism, being relegated instead to domestic courts when bringing a grievance against a host state” [The Conversation]. So, the public relations problem is fixed (tobacco) but the ISDS mechanism remains unchanged. That has Obama’s fingerprints all over it.

“Eighty-five percent of the members of the Obama administration’s 28 trade advisory committees are from corporations and trade associations, the Washington Post reported in 2014. Those members, the paper wrote, ‘attend private meetings with administration officials and get access to documents that the public cannot see'” [Business Insider]. Obviously, the administration should make all those “documents” accessible at once.

“A spokeswoman for the vice president confirmed Tuesday that Mr. Biden “supports the TPP agreement and will help pass it on the Hill'” [Wall Street Journal, ” Will TPP Alter Joe Biden’s Relationship With Labor Before 2016? “]. “[AFL-CIO’s]Trumka has called the vice president a ‘good friend’ and a ‘champion of working people.'” Gad.

“Former Secretary of State Hillary Clinton will roll out a plan to ‘go after risk’ in the financial markets, she told Iowa voters Tuesday, stopping short of calling for reinstating the tough financial regulations her husband repealed” [Politico].

“Hillary Rodham Clinton, as she offered up a sheaf of new health care proposals, said she was “building on the Affordable Care Act.” But lurking in those proposals was a veiled criticism of President Obama’s signature domestic achievement: For many families, the Affordable Care Act has not made health care affordable” [New York Times] (as we pointed out recently here, and NC readers could see coming a mile off). Sure, the famously thin-skinned Obama is “surprised and irked,” but Clinton’s still tinkering round the edges, and won’t mention single payer, despite her claims to take an “evidence-based” approach.

“Hillary Clinton hired a Connecticut company [Datto Inc] to back up her emails on a “cloud” storage system, and her lawyers have agreed to turn whatever it contains over to the FBI, a person familiar with the situation said Tuesday” [McClatchy]. “The source [familiar with Datto’s storage] said, however, that Platte River had set up a 60-day retention policy for the backup server, meaning that any emails to which incremental changes were made at least 60 days prior would be deleted and ‘gone forever.’ While the server wouldn’t have been ‘wiped clean,’ the source said, any underlying data likely would have been written over and would be difficult to recover.”

“Clinton was also surrounded by a Secret Service detail and an even more anxious team of staffers. ‘She has this very cautious staff that, when she’s on the rope line, she’s not answering reporter questions, she’s just sticking on message, and that’s really different than the way that a lot of other candidates work'” [Bloomberg].

Anti-Clinton quote dump from “Democratic strategists” including Axelrove [The Hill].

“For every county in the first four voting states of Iowa, New Hampshire, South Carolina and Nevada, the Cruz campaign has locked down county chairs in charge of not just lending their names to the campaign, but of spearheading outreach and organizing efforts” [New York Times]. And he’s still at 4%…

Not the Onion: “A lawyer who is standing for the US Senate in Florida has admitted killing a goat and drinking its blood as part of a sacrifice ‘to the god of the wilderness'” [Sky News]. Alrighty, then.

Gallup U.S. Job Creation Index, September 2015: “Gallup’s U.S. Job Creation Index registered plus 32 in September, the fifth consecutive month it has been at this level and the highest in Gallup’s seven-year trend” [Econoday]. “Net hiring in the private sector, where the large majority of U.S. employees work, was plus 33 for the month of September, the same it has been for five of the past six months. Government hiring netted plus 25 in September.”

Glencore: “Banks’ Glencore Exposure Is a $100 Billion `Gorilla,’ BofA Says” [Bloomberg]. More soberly, “Global financial firms’ estimated $100 billion or more exposure to Glencore Plc may draw more scrutiny as regulatory stress tests approach,” says BoA. From BI explainer: “The market volatility shows that no-one is quite sure what the company is worth” [Business Insider]. As if valuation were only intermittently puzzling…

VW: “The [Volkswagen] scandal has wiped more than a third off its share price, forced out its long-time chief executive, led its new CEO to predict ‘massive cutbacks’, and sent shockwaves through both the global car industry and the German establishment” [Reuters]. “In his newspaper interview, [new VW CEO Matthias] Mueller rejected the suggestion Volkswagen informed financial markets too late about the test rigging despite having told officials at the U.S. Environmental Protection Agency weeks before it went public.”

VW: “Although specifics remain sketchy, it appears that management from the engineering team instructed the use of the software, under pressure to market the “clean diesel” breakthrough” [Legal Reader]. “If these employees are identified as the key decision makers, Volkswagen may be able to avoid some of the financial penalties that the U.S. Justice department is seeking.” How con-v-e-e-e-e-n-ient. “Naming names is exactly what the Department’s new procedure calls for in order to receive credit during criminal probes.”

Monsanto: “Monsanto unveiled plans to cut one-in-eight staff and slash up to $400m in costs as the seeds giant unveiled a bigger quarterly loss than Wall Street had forecast, and braced investors for a worst-than-expected performance ahead” [Agrimoney]. “Agrichemical profits in the new financial year were forecast to fall sharply, to $900m-1.1bn, from $1,91bn, reflecting “continuing low” prices of generic glyphosate weedkillers, and the absence of a one-time $274m licensing deal which boosted profits in the latest year.”

The Fed: “There are two odd things about this debate. The first is that proponents of an interest-rate increase generally treat it as an end in itself. The second is that a tiny increase in the federal funds rate should be thought to be so important either way” [Bloomberg]. “Tightening current policy would signal that future policy will also be tighter, compared to a world where the Fed declines to raise rates.” So it’s not the change as such, but the direction of change.

The Fed: “Emerging market companies have an estimated $3 trillion in overextended loans that threaten to trigger a sharp credit crunch and capital outflows in economies that have already been hit hard by low commodity prices, the International Monetary Fund said on Wednesday” [Reuters]. “The IMF calculates that there is around $1.5 trillion in embedded leverage in U.S. bond funds through derivatives, which could unwind dramatically if the Fed’s normalization process provokes liquidity shocks.”

“They say its the strong $ that’s hurting exports. I say it’s the drop in oil related capex after the price collapse” [Mosler Economics].

Get a load of this at [Business Insider].

Disclosure: This post is brought to you by Business Insider’s Insider Picks team. We aim to highlight products and services you might find interesting, and if you buy them, we may get a small share of the revenue from the sale from our commerce partners, including Amazon. Jeff Bezos, CEO of Amazon, is an investor in Business Insider through his personal investment company Bezos Expeditions. We operate independently from our advertising sales team. We welcome your feedback. Have something you think we should know about? Email us at insiderpicks@businessinsider.com.

“[British intelligence agency GCHQ] have special tools that let them take over your smartphones with just a text message, said Edward Snowden, and there is ‘very little’ you can do to prevent them having ‘total control’ over your devices.” [Hacker News]. Dumb phones looking smarter and smarter!

“In rhetoric, most Tories — apart from May — are trying to hog the center ground (though they prefer to call it the ‘common ground’). They even use terms like ‘one nation,’ ‘social justice’ and ‘progressive.’ Yet look at where the cuts have fallen and are predicted to fall, and you can see that their own supporters have been brazenly protected” [Politico]. Nobody could have predicted….

“Ministers should waste no time to make unpopular cuts to pensioner benefits, a [Taxpayers’ Alliance] director has said” [BBC (AH)]. “Many of those hit by a cut to the winter fuel allowance might ‘not be around’ at the next election.” Tory scum. A splendid example of Rule #2 of neoliberalism.

“Malaysia’s royals make unprecedented call for action on corruption” [Guardian]. “The comments, which come ahead of a two-day gathering of the Conference of Rulers starting Wednesday, are unprecedented as the sultans assume a non-political role in Malaysia and rarely speak on the functioning of the state.”

“Microbes foil attempts to increase deep ocean carbon sequestration” [Oceanbites]. “The prospect of an inert carbon pool trapped in the ocean indefinitely raises exciting possibilities for geoengineering: if we can understand how and why this material is produced, we could produce it on a large scale and mitigate CO2 emissions to the atmosphere. …. This study suggests deep-sea DOM is not decomposed because individual compounds are too dilute to justify producing enzymes targeting them.”

South Carolina’s Savannah River 7″ above flood stage after Joaquin [NOAA (MW)]. So how about those nukes?

“Male suicide on rise as result of austerity, report suggests” [Science Daily]. They call it class warfare for a reason…

“Despite the drought, well-heeled residential customers in affluent neighborhoods are being allowed to use as much water as they want to buy, according to a review of utility records from the state’s biggest urban water agencies” [Reveal News].

“The Newly Discovered Tablet V of the Epic of Gilgamesh” [Ancient History Etc].

“Items listed at multiples of $100 ultimately sold for 5 to 8 percent less than items with non-rounded prices, but received offers faster and were more likely to sell” [NBER]. Signalling behavior….

“Strong placebo response thwarts painkiller trials” [Nature]. “An extensive analysis of trial data has found that responses to sham treatments have become stronger over time, making it harder to prove a drug’s advantage over placebo. Simply being in a US trial and receiving sham treatment now seems to relieve pain almost as effectively as many promising new drugs.”  Makes me wonder if marketing (“Ask your doctor about….”) has a bigger medical effect than we think.

Readers, feel free to contact me with (a) links, and even better (b) sources I should curate regularly, and (c) to find out how to send me images of plants. Vegetables are fine! Fungi are deemed to be honorary plants! See the previous Water Cooler (with plant) here. And here’s today’s plant (Jon): 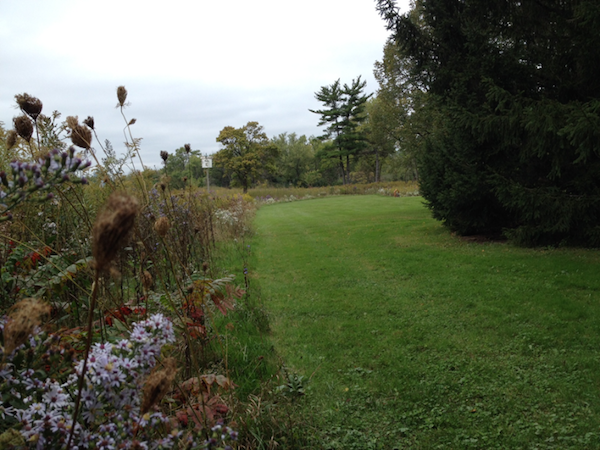 A curated Illinois prairie. This is where I have collected apples for years. teh trees are very old and passing on, seemingly no one else other that a grounds keeper are aware/care about them.. Now have the cultivar established in my yard so they live on. Best apples I’ve have ever had.