This is Naked Capitalism fundraising week. 1180 donors have already invested in our efforts to combat corruption and predatory conduct, particularly in the financial realm. Please join us and participate via our donation page, which shows how to give via check, credit card, debit card, or PayPal. Read about why we’re doing this fundraiser, what we’ve accomplished in the last year, and our fifth target, more original reporting.

Yves here. This is an important short paper, in that it provides evidence that contradicts the story our elites would like to tell about inequality: that’s it’s because our modern economy requires more skills, so those at the top can command, and indeed deserve more, and the rest are increasingly servant classes. In other words, the great unwashed public is to believe that the outcomes are meritocratic. Never mind the ample evidence to the contrary, for instance, that the most lavishly paid CEOs are the worst performing.

This article looks at an institutional factor, namely union power, and finds it plays an important role in explaining the rise in inequality in advanced economies. The authors are surprised to find that union weakness is correlated with better pay among top 10% earners. You’ll see they describe why the relationship could be causal. I’d argue that that both outcomes are an effect of the rise in neoliberal ideology, which in particular depicted CEOs as needing to have share-preformance-linked pay, which actually served as a justification for every-widening pay gaps between CEO compensation and that of ordinary workers. On top of that, the rise of pay for the CEO increased C-level pay, and also legitimated higher pay, meaning higher fees, among the professionals that sell services to big corporations.

nequality in advanced economies has risen considerably since the 1980s, largely driven by the increase of top earners’ income shares. This column revisits the drivers of inequality, emphasising the role played by changes in labour market institutions. It argues that the decline in union density has been strongly associated with the rise of top income inequality and discusses the multiple channels through which unionisation matters for income distribution.

Revisiting the Drivers of inequality: The Role of Labour Market Institutions

Rising inequality in advanced economies, in particular at the top of the distribution, has become a great focus of attention for economists and policymakers. In most advanced economies, the share of income accruing to the top 10% earners has increased at the expense of all other income groups (Figure 1). While some inequality can increase efficiency by strengthening incentives to work and invest, recent research suggests that high inequality is associated with lower and less sustainable growth in the medium run (Berg and Ostry 2011, Dabla-Norris et al. 2015). Moreover, a rising concentration of income at the top of the distribution can also reduce welfare by allowing top earners to manipulate the economic and political system in their favour (Stiglitz 2012).

Traditional explanations for the rise of inequality in advanced economies have been skill-biased technological change and globalisation, which increase the relative demand for skilled workers. However, these forces foster economic growth, and there is little policymakers are able or willing to do to reverse these trends. Moreover, while high income countries have been similarly affected by technological change and globalisation, inequality in these economies has risen at different speeds and magnitudes.

As a consequence, the more recent literature focuses on the relation between institutional changes and the rise of inequality, with financial deregulation and the decline in top marginal personal income tax rates often cited as important contributors. Surprisingly, the role played by changes in labour market institutions – such as the widespread decline in the share of workers affiliated with trade unions, so-called ‘union density’ – has not featured prominently in recent inequality debates. Nevertheless, these changes could potentially have profound implications on income distribution.

In a recent paper (Jaumotte and Osorio Buitron 2015), we fill this gap in the literature and examine the relationship between labour market institutions and various income inequality measures (namely, the top 10% income share, the Gini of gross income, and the Gini of net income), focusing on the experience of 20 advanced economies over the 1980-2010 period.1 While we pay particular attention to labour market institutions, our empirical approach controls for other determinants of inequality identified in the literature, such as technology, globalisation, financial liberalisation, top marginal personal income tax rates, and common global trends.

The most novel aspect of our paper is the discovery of a strong negative relationship between unionisation and top earners’ income shares (Figure 2).2 Although causality is always difficult to establish, the influence of union density on top income shares appears to be largely causal, as evidenced by our instrumental variable estimates. The set of instruments used for union density captures the fact that, although unionisation tends to decline in periods of high unemployment, the effect is weaker in countries where unemployment benefits are managed by unions (i.e. the Ghent system) or where collective bargaining is more centralised. In addition, the result survives the inclusion of possible omitted variables that could both reduce unionisation and increase inequality. These additional controls include changes in elected government and in social norms on inequality, sectoral employment shifts such as the decline of industry and rise of services sectors, the strong expansion of employment in finance, and rising education levels. 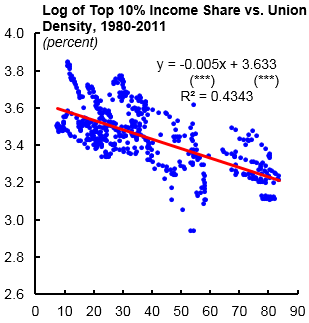 The magnitude of the effect is also significant; the decline in union density explains about 40% of the average increase in the top 10% of income share in our sample countries. One important caveat, though, is that the effect could be partly offset when collective bargaining coverage largely exceeds unionisation (e.g. through extension agreements), likely reflecting higher unemployment. While this second finding is somewhat less robust and needs further corroboration, it does suggest that representativeness of unions may be an important element for the latter to reduce inequality.

Another main result of our analysis is that the decline in union density has been strongly associated with less income redistribution, likely through unions’ reduced influence on public policy (Figure 3). Historically, unions have played an important role in the introduction of fundamental social and labour rights. Again, this relationship appears largely causal. With regard to other labour market institutions, we find that reductions in the minimum wage relative to the median wage are related to significant increases in overall inequality. But we do not find compelling evidence concerning the effects of unemployment benefits and employment protection laws on income inequality.

Channels: A Balance of Power Story

Our finding of a strong negative relationship between union density and top earners’ income share challenges preconceptions about the channels through which union density affects the distribution of incomes. Indeed, the widely held view is that changes in labour market institutions affect low- and middle-wage workers but are unlikely to have a direct impact on top income earners. Our finding highlights the interconnectedness between what happens to the middle class and top income shares. If de-unionisation weakens earnings of middle- and low-income workers, the income share of corporate managers and shareholders necessarily increases.

There are several channels through which weaker unions could lead to higher top income shares. In the workplace, the weakening of unions reduces the bargaining power of average wage earners relative to capital owners and top executives. Channels include the positive effect of weaker unions on the share of capital income – which tends to be more concentrated than labour income – and the fact that lower union density may reduce workers’ influence on corporate decisions, including those related to top executive compensation (Figure 4). Outside the workplace, there could be a political economy channel by which a weakening of unions reduces workers’ political voice and strengthens other already dominant groups, enabling them to better control the economic and political system in their favour (Acemoglu and Robinson 2013).

If our findings are interpreted as causal, higher unionisation and minimum wages can help reduce inequality. However, this is not necessarily a blanket recommendation for higher unionisation and minimum wages. Other dimensions are clearly relevant. The experience with unions has been positive in some countries, but less so in others. For instance, if unions primarily represent the interests of only some workers, they can lead to high structural unemployment for some other groups (e.g. the young). Similarly, in some instances, minimum wages can be too high and lead to high unemployment among unskilled workers and competitiveness losses. Deciding whether or not to reform labour market institutions has to be done on a country-by-country basis, taking into account how well the institutions are functioning and possible trade-offs with other policy objectives (competitiveness, growth, and employment). Finally, addressing rising inequality will likely require a multi-pronged approach including tax reform and policies to curb excesses associated with the deregulation of the financial sector.

Authors’ note: The views expressed herein are those of the authors and should not be attributed to the IMF, its Executive Board, or its management.