This is Naked Capitalism fundraising week. 329 donors have already invested in our efforts to combat corruption and predatory conduct, particularly in financial realm. Please join us and participate via our Tip Jar, which shows how to give via check, credit card, debit card, or PayPal. Read about why we’re doing this fundraiser, what we’ve accomplished in the last year, and our second target, funding for travel to conferences and in connection with original reporting.

Yves here. As anyone who has been in finance know, leverage amplifies gains and losses. Big company execs, apparently embracing the “IBG/YBG” (“I’ll Be Gone, You’ll Be Gone”) school of management, apparently believed they could beat the day of reckoning that would come of relying on stock buybacks to keep EPS rising, regardless of the underlying health of the enterprise. But even in an era of super-cheap credit, investors expect higher interest rates for more levered businesses, which is what you get when you keep borrowing to prop up per-share earnings. As Richter explains, the chickens are starting to come home to roost.

Companies with investment-grade credit ratings – the cream-of-the-crop “high-grade” corporate borrowers – have gorged on borrowed money at super-low interest rates over the past few years, as monetary policies put investors into trance. And interest on that mountain of debt, which grew another 4% in the second quarter, is now eating their earnings like never before.

These companies – according to JPMorgan analysts cited by Bloomberg – have incurred $119 billion in interest expense over the 12 months through the second quarter. The most ever.

With impeccable timing: for S&P 500 companies, revenues have been in a recession all year, and the last thing companies need now is higher expenses.

Risks are piling up too: according to Bloomberg, companies’ ability pay these interest expenses, as measured by the interest coverage ratio, dropped to the lowest level since 2009.

Companies also have to refinance that debt when it comes due. If they can’t, they’ll end up going through what their beaten-down brethren in the energy and mining sectors are undergoing right now: reshuffling assets and debts, some of it in bankruptcy court.

But high-grade borrowers can always borrow – as long as they remain “high-grade.” And for years, they were on the gravy train riding toward ever lower interest rates: they could replace old higher-interest debt with new lower-interest debt. But now the bonanza is ending. Bloomberg:

As recently as 2012, companies were refinancing at interest rates that were 0.83 percentage point cheaper than the rates on the debt they were replacing, JPMorgan analysts said. That gap narrowed to 0.26 percentage point last year, even without a rise in interest rates, because the average coupon on newly issued debt increased.

And the benefits of refinancing at lower rates are dwindling further:

Companies saved a mere 0.21 percentage point in the second quarter on refinancings as investors demanded average yields of 3.12 percent to own high-grade corporate debt – about half a percentage point more than the post-crisis low in May 2013.

That was in the second quarter. Since then, conditions have worsened. Moody’s Aaa Corporate Bond Yield index, which tracks the highest-rated borrowers, was at 3.29% in early February. In July last year, it was even lower for a few moments. So refinancing old debt at these super-low interest rates was a deal. But last week, the index was over 4%. It currently sits at 3.93%. And the benefits of refinancing at ever lower yields are disappearing fast.

“Increasingly alarming” is what Goldman’s credit strategists led by Lotfi Karoui called this deterioration of corporate balance sheets. And it will get worse as yields edge up and as corporate revenues and earnings sink deeper into the mire of the slowing global economy.

But these are the cream of the credit crop. At the other end of the spectrum – which the JPMorgan analysts (probably holding their nose) did not address – are the junk-rated masses of over-indebted corporate America. For deep-junk CCC-rated borrowers, replacing old debt with new debt has suddenly gotten to be much more expensive or even impossible, as yields have shot up from the low last June of around 8% to around 14% these days: 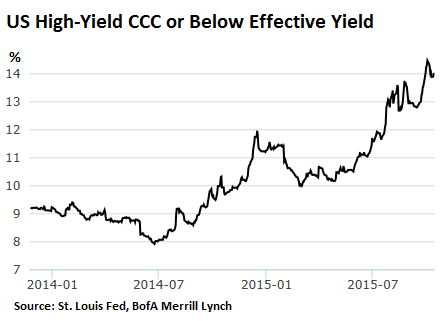 Yields have risen not because of the Fed’s policies – ZIRP is still in place – but because investors are coming out of their trance and are opening their eyes and are finally demanding higher returns to take on these risks. Even high-grade borrowers are feeling the long-dormant urge by investors to be once again compensated for risk, at least a tiny bit.

If the global economy slows down further and if revenues and earnings get dragged down with it, all of which are now part of the scenario, these highly leveraged balance sheets will further pressure already iffy earnings, and investors will get even colder feet, in a hail of credit down-grades, and demand even more compensation for taking on these risks.  It starts a vicious circle, even in high-grade debt.

Alas, much of the debt wasn’t invested in productive assets that would generate income and make it easier to service the debt. Instead, companies plowed this money into dizzying amounts of share repurchases designed to prop up the company’s stock and nothing else, and they plowed it into grandiose mergers and acquisitions, and into other worthy financial engineering projects.

Now the money is gone. The debt remains. And the interest has to be paid. It’s the hangover after a long party. And even Wall Street is starting to fret, according to Bloomberg:

The borrowing has gotten so aggressive that for the first time in about five years, equity fund managers who said they’d prefer companies use cash flow to improve their balance sheets outnumbered those who said they’d rather have it returned to shareholders, according to a survey by Bank of America Merrill Lynch.

But it’s still not sinking in. Companies are still announcing share buybacks with breath-taking amounts, even as revenues and earnings are stuck in a quagmire. They want to prop up their shares in one last desperate effort. In the past, this sort of financial engineering worked. Every year since 2007, companies that bought back their own shares aggressively saw their shares outperform the S&P 500 index.

But it isn’t working anymore. Bloomberg found that since May, shares of companies that have plowed the most into share buybacks have fallen even further than the S&P 500. Wal-Mart is a prime example. Turns out, once financial engineering fails, all bets are off. Read… The Chilling Thing Wal-Mart Said about Financial Engineering