Searchable full text of TPP [Wikileaks]. (That’s a pretty keen search box, though one could wish for facets.)

While past agreements have contained similar enforcement provisions for the environment chapter, no Party has ever brought a formal case based on the environmental provisions of any U.S.A. FTA — despite documented violations” [Center for International Environmental Law]. Remember that the “parties” in TPP are states.

“VIDEO: Trump doubles down on bombing ‘the s—‘ out of ISIS as crowd chants, ‘Trump! Trump! Trump'” [Business Insider].

“Sanders: We will not turn our backs on Syrian refugees” [Politico].

“Bernie Sanders: World is paying the price today for the ‘tough, but stupid’ policies of Cheney and Bush” [Raw Story].

“Why Hillary’s Wall Street Problem Won’t Go Away” [The New Republic]. “Even the savviest candidate in the Democratic field can’t answer a simple question about her big money donors.” That Democratic debate is the gift that keeps on giving, so hats off to Debbie Wasserman Schultz for keeping those ratings low. When questoned about her relationship with Wall Street donors during Saturday night’s Democratic debate:

[CLINTON] You know, not only do I have hundreds of thousands of donors, most of them small, I am very proud that for the first time a majority of my donors are women, 60 percent. (APPLAUSE) So I—I represented New York. And I represented New York on 9/11 when we were attacked.

My jaw dropped, along with the rest of the country. And the famous tweet that CBS called out with their follow-up to Clinton: “Have never seen a candidate invoke 9/11 to justify millions of Wall Street donations.” And that’s what I saw, too; just like Giuliani, also from New York: “A noun, a verb, 9/11.” Read the article for how Clinton blames the Twitterer for getting the same impression that millions of other people got. Here’s the bottom line:

Clinton and her campaign, which is composed of some of the savviest, most experienced political strategists around, surely knew none of this would hold water. Yet it’s also almost certain, given her team’s experience, that this was a pre-fabricated answer to an issue one would expect to arise in a confrontation with Senator Bernie Sanders, who has made refusing big money donations a cornerstone of his campaign. Which raises the question: Why would such a smart, skilled politician deliver such a clumsy, frangible answer, especially the sort that would open her up to the PR nightmare of appearing to exploit 9/11 immediately after the heinous Friday night attacks on Paris?

Ouch, TNR! Because there’s no good answer to this. 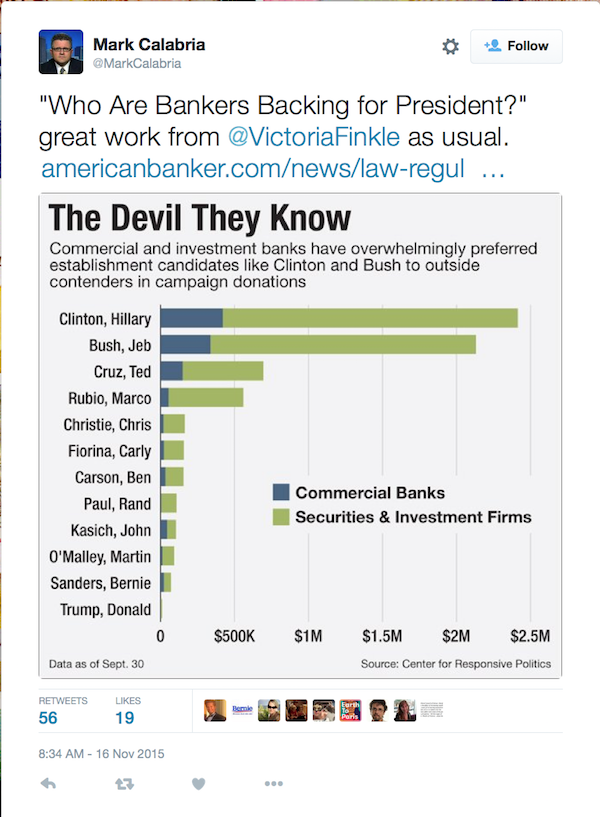 “Hillary Clinton has lost her key fundraising liaison with Silicon Valley’s tech sector, a blow to the campaign in that important donor region” [The Hill]. “Emanuel Yekutiel confirmed to The Hill in a telephone interview that he resigned from Clinton’s presidential campaign, saying he “just came to the realization that I didn’t want to be in political fundraising at this time in my life anymore. Yekutiel was an important recruit for the campaign, as he was previously chief of staff for Facebook CEO Mark Zuckerberg’s political advocacy group, FWD.us.”

“At her first official campaign event back in April, Hillary Clinton promised to make reducing the influence of big money in elections a “pillar” of her campaign for president of the United States. Seven months later, the pillar appears to still be under construction” [US News].

“Clinton ‘often confused’ says staffer in email.” That would be Huma Abedin [The Hill]. Here’s the trove (PDF), FOIAed by Judicial Watch. The trove also contains mail on how Clinton will recognize a political contact “if prompted.”

“The GOP Clown Car Rolls On” [Matt Taibbi, Rolling Stone]. Not quite “Fear and Loathing” quality, but Thompson lived and wrote in a more innocent time.

“According to media buyers and a POLITICO review of TV ad purchase data, Bush and his allies are on pace to spend $5 million more than Team Rubio on broadcast, cable and radio ads through the first four voting states – but for that sum, they will put fewer ads on the airwaves” [Politico]. “That’s because the vast majority of Bush’s ads are paid for by his super PAC – roughly 85 percent for Bush versus only 40 percent for Rubio – and super PACs get far less bang for their buck.

Industrial Production, October 2015: “In a deceptive headline, industrial production fell 0.2 percent in October but weakness is in utilities and mining” [Econoday]. “Boosted by construction supplies, manufacturing, which is the core component in this report, rose a very solid and higher-than-expected 0.4 percent to end two prior months of decline.”

Housing Market Index, November 2015: “The housing market index from the nation’s home builders shows weakness, at 62 for November and missing the Econoday consensus by 2 points” [Econoday]. “[I]f weaker commodity prices don’t de-rail risk sentiment, then we get left with deteriorating fundamentals across a swathe of emerging market assets with no compensation from the Fed.”

E-Commerce Retail Sales, October 2015: “Growth in e-commerce sales remained strong in the third quarter, at 4.2 percent vs an upward revised 4.4 percent in the second quarter” [Econoday]. “As a percentage of total retail sales, e-commerce continues to climb to records, up 2 tenths in the quarter to 7.4 percent.”

Consumer Price Index, October 2015: “Consumer prices are showing some lift but not wide pressure nor accelerating pressure, at least yet. The CPI rose 0.2 percent in October with the core also up 0.2 percent, both hitting expectations” [Econoday].

Food: “[F]ood experts said protein prices are likely to subside in coming months as production increases, offsetting recent supply shortages” [Market News]. (I like that generic “protein,” there.) “[John Anderson, deputy chief economist at the American Farm Bureau Federation] argued that, rather than focusing on food prices themselves, a better guide to the CPI’s latest behavior might be the ‘food away from home’ component which rose an annual 2.9%, or more than three times the 0.8% gain in the ‘food at home’ category.” Gig economy means more “food away from home”?

Ag: “Hedge funds turned bearish on agricultural commodities at the fastest pace in more than two years, encouraged by bigger-than-expected upgrades by US officials to their estimates for domestic supplies of the main grains” [Agrimoney].

Shipping: “The [nation’s largest container port, The] Port of Los Angeles handled 358,602 containers loaded with imported goods last month, a decline of 3.3% from the same month in 2014 and a drop of 12% since August, when import volumes peaked earlier than usual at several of the Pacific ports.” [Wall Street Journal, “Los Angeles Port Sees Weak End to Peak Shipping Season as Imports Drop “]. “October is usually a busy month as goods arrive to stock shelves during the holiday season. However, this October was the second-slowest for imports at L.A. in the last five years.”

Retail: “Michael P. Niemira, chief economist of The Retail Economist, LLC, observed ‘Warm weather relative to last year may have curbed the consumers’ appetite to shop over the past week, but with the holiday season upon us, consumers will begin their annual ‘Bargain Friday’ shopping – even though it may be on every day of the holiday season, including Thanksgiving Day.'” [Market News]. “Bargain Friday”?

Retail: “The Bank of America Merrill Lynch U.S. Retail index has almost doubled in the past seven years to include debt with a face value of $183 billion. The growth came on the heels of the Federal Reserve’s unprecedented stimulus efforts, which suppressed benchmark yields and allowed some companies to survive simply by pushing back their debt maturities” [Bloomberg].

The Fed: “The steady and remorseless weakness of major commodity prices is possibly a bigger story [than Paris]. Especially if it fails to feed back into bigger global worry through equity markets. I saw a poll yesterday showing an even 50-50 split on whether the Fed is likely to hike in December, as people saw yet another reason for the Fed to delay. But if equity markets remain resilient and there are no surprises in the CPI data today, for starters, then the market will slowly become more confident again of a December lift-off. [SocGen, Across the Curve].

“Haven’t got your flu shot? Uber is offering one-day, on-demand vaccinations to your doorstep” [WaPo]. The real question is why WaPo is running advertorials for Uber, a company in which its squillionaire owner, Jeff Bezos, is an investor.

“The badge” [Doctor Grumpy in the House]. This is awesome. I’m sure readers will have had similar experiences.

“One of the most detailed plans to replace Obamacare this year comes not from a Republican critic, but from a group in swing-state Colorado that is proposing to scrap it for a single-payer model long sought by liberals” [Politico].

“Affordable Care Act leads to single-payer” [Tyler Morning Telegraph]. I can assure my friends on the right that Obama, and the career “progressives” who ran interference for him, did everything possible to make sure single payer would never happen, as was indeed the goal of the Heritage Foundation, in proposing the plan on which ObamaCare was based.

“[Julian Castro] was in office barely two months when he met with Dallas Mayor Mike Rawlings, a Democrat, and then pulled the plug on a four-year HUD investigation that had found Dallas in violation of the law in how it spent hundreds of millions of dollars in HUD grant money.  Rawlings declared victory at that point and publicly thanked Castro for his help, but it’s fair to ask in retrospect exactly what kind of victory it was for a self-respecting Democrat” [Dallas Observer]. Castro is said to be on Clinton’s short list of Veep.

“Pinboard on the Next Economy Conference” [Story]. Mordant commentary from the @pinboard guy. And more signs of froth than you can shake a stick at. And apparently the taxi driver panel stole the show. Anyhow:

“When I meet with COO Sheryl Sandberg, she shares a personal story of a family gathering involving the making of s’mores. It captures several of Zuckerberg’s preternatural gifts.” [Fast Company].

“This can still happen anywhere. Not everything is lost” [Live & Learn]. 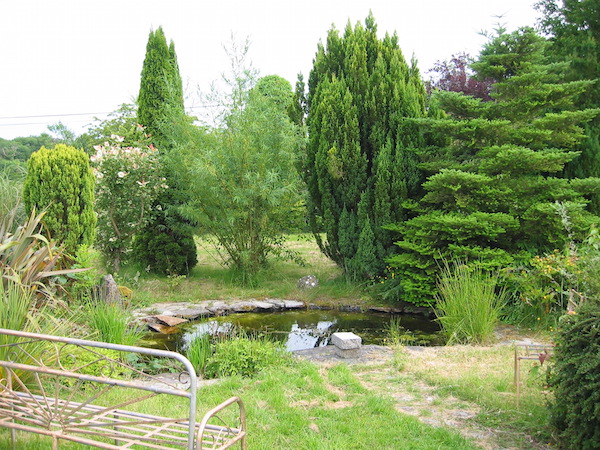 What an inviting space!