“TPP signing likely to be in NZ” [New Zealand Herald]. Because of the hobbits?

“Hillary Clinton calls for U.S. to ‘intensify and broaden’ efforts to fight ISIS” (transcript) [CNN]. I’m such a bad person, the first thing I noticed was lawyerly parsing. Can you spot it?

That’s right. “Directly funding.” Maybe they should launder their money, say through a Foundation?

“The Clintons’ so-called charitable enterprise has served as a vehicle to launder money and to enrich family friends” [Harpers]. This was in Links, but I’m putting that quote out there.

“Bernie Sanders Doesn’t Have the Killer Instinct Needed to Beat Hillary Clinton” [The New Republic]. “It’s admirable that Sander is framing his campaign as being about issues and not personality. This has led to widely admired moments, as when he defended Clinton in both debates on the ginned-up email scandal. The flip side of this high-mindedness, however, is that Sanders has no killer instinct. He raises questions about Clinton but doesn’t push them hard enough to damage her campaign. Lacking the will to win, his campaign increasingly seems like a symbolic crusade.” And see this comment from Michael C:

if [Sanders] is interersted in building a movement and a revolution, then he should be giving shout-outs in each state to the groups that are part of the movement and could use reinforcements (Move-to-Amend, state single payer groups, etc.), Let’s face it. Hilllary will get  [maybe] the nomination, and if Sanders wants a revolution, he better begin building something with some kind of infrastructure utilizing those progressive activists already doing the difficult yeoman work of turning the tide of corporate control. I don’t seen him doing that, and if his campaign is not to be about him, as he says, then he better get smarter about helping develop the groundwork for this revolution after he becomes an also ran.

I’d caution that we aren’t even in the Iowa caucuses! And a caucus or primary is hard enough to organize, let alone a mass movement, let alone a revolution. Nevertheless:

ESTRAGON: I’m going. [He does not move.] –Samuel Becket, Waiting for Godot

Come on!  As I’ve said, my test for the Sanders campaign is whether he moves the Overton Window left toward topics like single payer. This, Sanders is doing. Maybe some single payer advocates should disrupt Sanders’ next speech? That does seem to get results.

A great review of my Aberdeen course by prestigious @GolfMonthly.  Some say greatest ever built. @TrumpScotland  https://t.co/zYcraTAwzs

I’m on the record (somewhere) to the effect that engagement in, or even knowledge of, golf should be a disqualification for high office. I mean, why are all those movers and shakers out there on the fairways, eh? No mikes.

“Senate Democrats on Thursday blocked a push by Sen. Ted Cruz to pass legislation that would block refugees from countries with ‘terrorist-controlled territory’ from entering the United States” [The Hill]. Vitter isn’t the only Congressional fan of diapers, I see.

Jobless Claims, week of November 14, 2015: “The labor market remains solid with employment low but conditions aren’t improving further, based at least on indications from jobless claims data” [Econoday]. “But levels in this report, whether improving or not, remain historically low and point to a definitive lack of slack in the available labor pool.” And: “14 November 2015 Initial Unemployment Claims Rolling Average Again Degrades But Remains Very Low Historically” [Econintersect].

Philadelphia Fed Business Outlook Survey, November 2015: “The Philly Fed index ended two months of contraction with a small gain of 1.9 which is near enough to the Econoday consensus for no change” [Econoday]. “But new orders are not in the plus column, at minus 3.7 for a second straight negative score. Shipments are also in the wrong column, at minus 2.5 for what is also a second straight negative month. The average workweek is down very sharply in the Mid-Atlantic factory sector, at minus 16.2 which doesn’t point to strength ahead for employment.” Sadly, it doesn’t take many workers to make an Hermés stocking stuffer. And there aren’t that many Hermés stockings to be stuffed.  But: “This is a very noisy index which readers should be reminded is sentiment based. The Philly Fed historically is one of the more negative of all the Fed manufacturing surveys but has been more positive then the others recently” [Econintersect].

Leading Indicators, October 2015: “The rise underway in long-term interest rates, as an indication of strength in borrowing demand, gave a big boost to the index of leading economic indicators which rose a very strong 0.6 percent in the October report. The rebound in the stock market and yesterday’s gain for housing permits were also positives and point to rising strength for the economy” [Econoday]. “This report had been dead flat since July and October’s gain is a sudden indication of acceleration ahead. And though the gain is centered in interest rates where a counter-intuitive strain runs, that is high rates will tend to limit economic growth, most components are solid.” However: “The data does not exist to establish what The Conference Board’s LEI values would have been in real time – at this point only the final numbers are known. Unfortunately, knowing the current values is no assurance that a recession is or is not imminent as there is no track record of real time performance” [Econintersect].

Bloomberg Consumer Comfort Index, week of November 11, 2015: “The consumer comfort index is down for the third time in four weeks, 4 tenths lower at 41.2 for the November 15 week. Readings on consumer confidence peaked at mid year and have since moderated but they remain solid”  [Econoday].

The Fed: “US Speaker Ryan Applauds House Passage of Fed Overhaul Bill” [Market News]. Newly minted speaker Paul Ryan: “If the Federal Reserve explained to the public how it made its decisions, the American people would have greater confidence in them.” I hadn’t thought of Ryan as a brilliant dead-pan comedian; I guess I’m going to have to put him in another box.

The Fed: “Will the Fed raise interest rates at its December monetary policy meeting? Probably. … I believe the Fed should hold off a bit longer” [Mark Thoma, CBS]. Since Thoma is one of the saner mainstream economists, this is an interesting straw in the wind.

Honey for the Bears: “Corporate America has a profit problem. U.S company earnings are falling for the first time since 2009, when the economy was still reeling from the Great Recession” [AP]. “The main culprit is the plunging price of oil, which has decimated earnings at big energy companies like Exxon Mobil and Chevron. Mining companies have also taken a beating because of tumbling prices for gold, silver and copper. And energy companies aren’t the only ones having trouble earning money, as several thorny problems continue to nettle Corporate America.”

Honey for the Bears: “San Francisco in housing ‘correction’” [CNBC].

Honey for the Bears:  “London Mansion Prices Fall 11.5% as Home `Bubble’ May Have Burst” [Bloomberg].

Honey for the Bears: “Luxury-Jet Market Value Seen Slipping for First Time Since 2009” [Bloomberg]. Of course, it’s possible the 1% have all the London mansions and luxury jets they need? BWA-HA-HA-HA-HA-HA-HA!!!! I crack myself up, sometimes.

“Silicon Valley-Bay Area’s strong post-recession economic growth is the reason California has had a recovery; hence, the recovery shouldn’t be cause for celebration among the state’s leaders. California’s economic recovery is occurring on the shoulders of just one region. This lack of economic diversification puts the Golden State in a precarious position” [Real Clear Markets].

“The Dow Jones Industrial Average plunged by 1,089 points in the opening minutes of trading on August 24. Finger-pointing and hostility have grown among competing factions since that day” [Wall Street on Parade]. Phishers settling round a new strange attractor?

“The disclosure by the biggest U.S. health insurer, which had just last month sounded optimistic notes about the segment’s prospects, will sharply boost worries about the sustainability of the law’s signature marketplaces, amid signs that many insurers’ losses on the business continue to mount” [Across the Curve]. More signs of an actuarial death spiral.

“Thomas Friedman’s “Cabs, Camels or ISIS” column this week is either a brilliant self-parody, or a plant in the Times by the Pentagon to confuse the Islamic State”  [Matt Taibi, Rolling Stone].

“2015 shatters the temperature record as global warming speeds back up” [Guardian].

At the start of the year there were some 30 people working at the [SolarCity] warehouse [in Las Vegas]; now there are about 200. The jobs are a welcome boost for a city that was hit hard by the property crash and the financial crisis of 2007-09. Experienced crews have been brought in from neighbouring California and Arizona, and some of the new hires are former oilfield workers from Texas and Oklahoma, laid off following the collapse in oil prices” [FT, “Sunshine revolution: the age of solar power” (PT)].

“Oklahoma Now No. 1 in Earthquakes” [New York Magazine]. “Such a shame we’re on loam here.”

“The Committee to Protect Journalists, an international press freedom organization, has written to the Bulgarian Prime Minister, and top EU leaders, expressing concern that Bulgarian journalists investigating a huge corruption case have been harassed, warning they are at risk of retaliation for their reporting” [Euractive]. “[independent news website Bivol editor Atanas] Chobanov told EurActiv that his team is in the process of investigating ‘probably the largest single theft of EU funds’, specifically, of a transfer of €18.9 million of EU money via a shell company from Romania to Cyprus, where this money has disappeared.” Million? That doesn’t seem like very much.

“After an investigation showed that thousands of mistakes have been made in mailing out tickets from speed cameras, Mayor Rahm Emanuel has responded, insisting that the cameras are doing what they are supposed to do and slowing down speeders” [NBC Chicago]. Filed under corruption, because Rahm. Nevertheless, this is a clear case of law enforcement for profit. I wonder if the vendor shows the how to jigger the settings for revenue enhancements, or whether that’s done by bent consultants, for deniability? Not that I’m foily…

“US Not Sure Who It’s Fighting In Middle East, Bombs Israel ‘Just To Be Sure'” [Duffel Blog].

“If a nuke lands near your house, rather than on top of it, we figured you’d like some tips on how to survive to apocalypse” [Ars Technica]. “Step one: find a bunker.”

Readers, feel free to contact me with (a) links, and even better (b) sources I should curate regularly, and (c) to find out how to send me images of plants. Vegetables are fine! Fungi are deemed to be honorary plants! See the previous Water Cooler (with plant) here. And here’s today’s plant (Kokuanani): 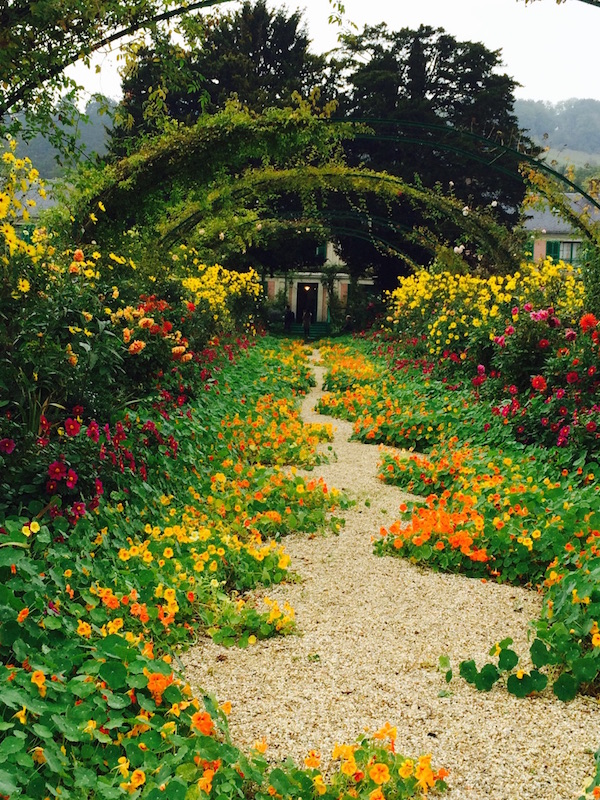 Monet’s garden at Giverny; another inviting path! Over time, I’ve discovered that what I want from my garden is not “yield,” in the classic permacultural sense, but a place to sit, and above all, a place to photograph. Go figure…