“France says it is ready to pull out of talks over the controversial Transatlantic free-trade agreement between the EU and the US, because the “secretive” negotiations were favouring American interests over French ones”  [The Local]. “‘We do not feel the US is taking into account our wishes around services, nor on the issue of private arbitration courts. The negotiations should certainly enable our small and medium sized companies and farmers to have access to the markets,’ [France’s Secretary of State for Foreign Commerce Mathias Fekl] said.  ‘Europe has made offers in all areas, but the United States has failed to reciprocate, whether it’s access to the public contracts or agricultural markets,’ Fekl said.”

“When Texas fell to the wingnuts: The secret history of the Southern strategy, modern conservatism and the Lone Star State” [Edward H. Miller,  Salon].

“Read the new debate demands Ben Ginsberg has compiled from Republican campaigns” [WaPo]. My favorite: “[D]escribe how far away the bathrooms are.” What, worried about a diaper change? Anderson Cooper’s first question to Clinton was “Will you say anything to be elected?”  But I didn’t hear Clinton whinging and blinding and stiffing about that. Or stamping her feet and issuing demands. Represent, dudes!

“How Jeb Bush may have just outsourced a key part of his campaign” [WaPo]. The “leak” of Jebbie’s game plan against Rubio might have been a communication to the Bush SuperPAC (since campaigns and SuperPACs cannot, legally, coordinate). For the architecture of Jebbie’s campaign, see NC here.

“The [first Sanders television] ad titled ‘Real Change’ will air statewide in Iowa and New Hampshire and is part of a buy exceeding $2 million” (video) [The Hill].

“Paul Ryan’s first challenge as House speaker: Getting the smell of smoke left by Boehner out of the speaker’s office” [Yahoo News].

Construction Spending, September 2015: “Construction spending looks solid, up a better-than-expected 0.6 percent in September with gains led by housing components” [Econoday]. “The gains in this report, especially for multi-family units, are the outcome of a spike in permits during the spring. Permits, however, have not been showing great strength in recent months, in turn pointing to moderation for what still looks to be, however, a solid construction sector.” And: “The headlines say construction spending grew. The backward revisions make this series very wacky – but the backward revisions this month were upward making the data better than the headline view. In any event, construction spending is growing much faster than the economy in general” [Econintersect].

ISM Mfg Index, October 2015: “For a third straight month, the ISM is skirting near contraction” [Econoday]. “These readings do not point to contraction, which is what the factory sector has actually been in over the last year, but they are the lowest run for this report of the recovery.” And: “This is the 34th month of expansion. The regional Fed manufacturing surveys indicated little growth or contraction in September, and now the ISM indicates manufacturing shows weak expansion” [Econintersect]. But: “[W]ith the various regional manufacturing PMIs still firmly in contractionary territory, it will be some time before momentum begins to shift back in a positive direction” [Across the Curve].

PMI Manufacturing Index, October 2015: “Most measures of the U.S. factory sector are in contraction or, like the upcoming ISM report, in near contraction, but not the manufacturing PMI which continues to post solid rates of growth” [Econoday].

Silicon Valley: “‘For all the fascination we have with Silicon Valley … they are not finishing the job. They rarely bother with the question of how [new technology] will fit with older stuff, and the solution to that is left to other people,” [Gianni Giacomelli, Genpact’s senior vice president of product innovation] added. ‘To get that done at scale is a big issue.'” [CNBC]. Why, it’s almost like the Valley has become financialized….

“Skopos Financial, a deep-subprime auto finance company based in Irving, Texas, is packaging $154 million of loans made to borrowers with weak credit — and some without a credit score — into bonds rated investment grade. …  The offering is the latest prepared by privately backed auto lenders that offload their risk into securities bought by institutional investors….  Overall outstanding auto debt now exceeds $1 trillion, Federal Reserve Bank of New York data show” [Across the Curve]. What could go wrong?

“The most common denominator to those still actively looking for opportunities in the U.S. high yield sector is the strong conviction that the U.S. economy will prove resilient in the face of a global growth slowdown, the Federal Reserve expected tightening and the persistently strong U.S. dollar, and that spiking defaults in the energy, metals, and mining sectors will not spread to other areas of high yield” [Market News]. What could go wrong?

The Fed: “U.S. jobs data due in the coming week may hold the key to whether the Federal Reserve will raise interest rates for the first time since 2006 in December, signaling its intention to end an era of almost-free dollars” [Reuters]. I think people like them some free money. It’s going to be hard to take it away.

“Why I Still Get Shunned by Taxi Drivers” [The Atlantic].

I always thought marijuana legalization would keep money local by benefitting small growers (and that corporations, and corporating marketing, should be kept well away. The millionaires bankrolling Ohio’s Issue 3 do not agree [New York Times, “On Ballot, Ohio Grapples With Specter of Marijuana Monopoly”].

“From administrator: ‘Dr. Leap, Mr. Whatzit is a very, very important donor to the hospital. It’s critical that he get good care. Do you understand?'” [Life in Emergistan]. Of course, I could also file this under corruption. Or class warfare.

“While Chicago Public Schools continues to beg Springfield for $480 million to balance its budget and enrollment has dropped another 4,400 students, the Board of Education on Wednesday unanimously decided to open two new charter schools in the fall” [Chicago Sun-Times]. Everything’s going according to plan!

“The Machine” at the University of Alabama [AP]. “19-year-old Alex Smith was happy to be elected to the campus Senate as a representative of her Machine-aligned sorority earlier this year. Her excitement turned quickly to uneasiness, and it ended this week in the most unthinkable of ways: She publicly exposed The Machine in a first-person article published by the campus newspaper and she resigned from the group.” Good for her:

Smith, a sophomore honors student from Huntsville, wrote that she no longer could be part of an organization that uses pressure and intimidation to control campus for the benefit of fraternity and sorority members, who comprise about 25 percent of the university’s 36,000 students. “It is a corrupt system.”

“Forgotten trees from long lost orchards and 20th-century city landscaping are being rediscovered in urban areas, and their fruits are proving not only largely free of urban pollutants, but more nutritious than their retail counterparts” [Science Daily].

“Yes, you may have GOP presidential candidates who prefer to dispute volumes of data about climate change. Possibly, they are obliged to constituencies on higher ground” [Atlanta Journal-Constitution]. “But you do have a class of people on the Georgia coast who see things with their own eyes and their own gauges. They are mayors, council members, county commissioners, scientists and even government bureaucrats. Republicans as well as Democrats. The sea is rising, and not everyone can wait for Donald Trump and Ted Cruz to change their minds.”

“Did an app get Jeremy Corbyn elected Labour leader?” [New Statesman]. Sounds rather like the 2008 Obama campaign! And no wonder the Blairites were ticked: Using technology to bring in all these damned outsiders!

“Wealth management is a profession on the defensive. Although many people have never heard of it, it is well known to both state revenue authorities and international agencies seeking to impose the rule of law on high-net-worth individuals” [The Atlantic]. Wait, what? Impunity?

“The rating systems used by [companies like Uber, AirBnB, and TaskRabbit] have turned customers into unwitting and sometimes unwittingly ruthless middle managers, more efficient than any boss a company could hope to hire. They’re always there, working for free, hypersensitive to the smallest error. All the algorithm has to do is tally up their judgments and deactivate accordingly” [The Verge].

“[I]ndependent data analysis of its business practices in numerous cities has revealed that Airbnb has morphed into a giant loophole for professional real-estate operatives. Airbnb is allowing an increasing number of these professionals to evade city laws that are crucial for preserving the housing stock for local residents. Consequently, Airbnb’s service eating up affordable housing” [San Francisco Examiner].

“A study led by Johns Hopkins Medicine researchers suggests that awakening several times throughout the night is more detrimental to people’s positive moods than getting the same shortened amount of sleep without interruption” [Psypost]. Methodology: Paragraph 2 (abstract of original).

“My six nation Haudenosaunee passport is not a ‘fantasy document'” [Guardian]. If the tribes are sovereign, they get their own passports, right? Apparently not.

The Max Planck Institute for Plasma Physics is going to fire up a stellarator, a fusion technology that competes with the tokomak [Science].

“How a group of neighbors created their own Internet service” [Ars Technica].

“How the Internet’s most earnest evangelist became its fiercest critic” [WaPo] (and also). “Staring at a glowing rectangle,” he’ll say several times, “is no way to live.”

“Wikipedia is a classic example of how the next big thing often starts out looking like a toy” [Wikipedia]. Anybody seen any interesting toys lately?

Readers, feel free to contact me with (a) links, and even better (b) sources I should curate regularly, and (c) to find out how to send me images of plants. Vegetables are fine! Fungi are deemed to be honorary plants! See the previous Water Cooler (with plant) here. And here’s today’s plant (Donna): 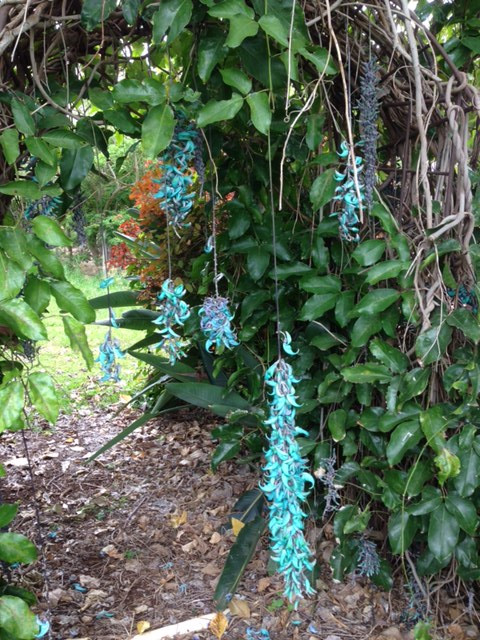 Here are some jade flowers which grow wild on the side of our house on Maui. They make up into lovely lei.

If you enjoy Water Cooler, please consider tipping and click the hat. Winter is almost here, I need to buy fuel, and I need to keep my server up, too. And thanks so much for the donations during the annual fundraiser. They are much appreciated, both practically, and as signs that you enjoy the work.