In late September, we wrote the members of CalPERS’ board* and cc’d the general counsel to alert them to the fact that the manner in which they had awarded bonuses and salary increases to CalPERS executives fell short of the requirements of the Bagley-Keene Open Meeting Act of 2004. We’ve embedded the letter sent to the chairman of the board at the end of the post.

Bagley-Keene was originally passed in 1967 and has been updated periodically. From Wikipedia:

The Bagley-Keene Act …implements a provision of the California Constitution which declares that “the meetings of public bodies and the writings of public officials and agencies shall be open to public scrutiny”, and explicitly mandates open meetings for California State agencies, boards, and commissions. The act facilitates accountability and transparency of government activities and protects the rights of citizens to participate in State government deliberations.

As the letter described, CalPERS had consistently awarded salary increases and bonuses to the CEO, the CIO, and other top executives in closed session, meaning out of the eyes of the public. A 2004 guidance issued by the state attorney general stated, “…, we do not think that discussion of employee compensation may be conducted in closed session.” Note that the underlying review of performance is exempt from the public disclosure requirement, but not the decision on pay amounts.

We pointed out that CalPERS appeared to have made salary increase and bonus decisions in its September board meeting. If so, and it did not remedy the matter, as we wrote, it “would leave your staff who received such tainted compensation in the awkward position of having obtained trust fund assets via illegal means.” Fortunately, the solution was not difficult: CalPERS needed to rescind the bonus and salary awards, put the matter on the agenda for a future board meeting, and make the awards in public.

CalPERS got the message. See this segment from the October 21 board meeting:

Note, however, that the board did not approve all of the salary and bonus awards that we flagged as problematic. They did read out and approve the 2014-2105 bonuses and 2015-2016 salary increases for the CEO Anne Stausboll and Chief Investment Offices Ted Eliopoulos. But they did not include other bonus and salary awards that previous years have had been on the agenda as discussion items in closed session, such as for the general counsel, chief actuary. Here is the agenda listing for first time the bonus and compensation awards were up for discussion, in September 2015:

The comparable agenda item in 2013 makes clearer the line CalPERS is attempting to walk:

In other words, the board is taking the position that it is not responsible for the bonus and salary increase decisions made for anyone on staff except for the CEO and CIO; those decisions are made by the CEO for the most senior roles and by other staff members for positions further down the hierarchy. It appears that CalPERS changed its policies in 2012. From a May memo:

These were the changes approved by the board that were in the process of being implemented (and a June 2012 memo describes the progress): 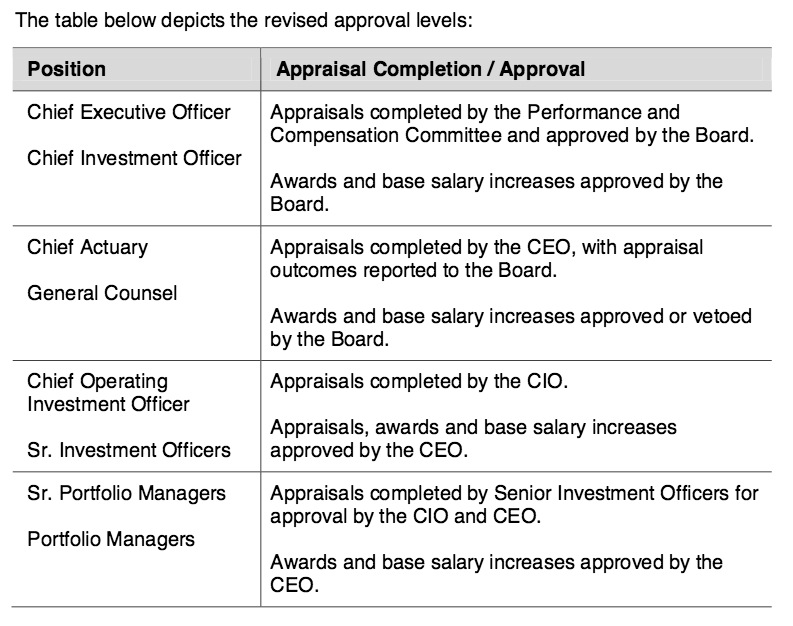 This isn’t the first example of the CalPERS board choosing to abdicate authority it held since its inception. More important, the abandonment of long-established checks and oversight is not how a healthy, well-functioning organization operates.

This shift appears to be the result of a successful effort by the CEO Anne Stausboll to curb board oversight of CalPERS by taking advantage of the pay to play crisis, which led to the successful prosecution of former CalPERS CEO Frank Buenrostro as well as the resignation of several board members.

Yet if anything, the decline in CalPERS’ reputation and clout has continued as Stausboll has amassed more authority. For instance, as Gretchen Morgenson of the New York Times pointed out over the weekend weekend, CalPERS’ decision to stop investing in hedge funds, which historically would have led other public pension funds to at least reconsider their loyalties, has not produced any follow-through. Indeed, allocations to hedge funds are rising (for instance, CalSTRS is seriously considering committing more to hedge fund strategies as “risk mitigation even as the evidence shows that hedge fund returns are more and more correlated with stock market results. In other words, hedge funds are no longer a hedge).

And the initiative that led CalPERS to become a leader among institutional investors, its advocacy for strong corporate governance and its activist posture, came from a board member, Jesse Unruh, then the California Treasurer, demonstrating the value of an engaged and influential board. While the current California Treasurer John Chiang’s plan to propose legislation to require disclosure of all private equity fees and related party transactions would be an important step in board members reasserting their authority, the current enfeebled CalPERS board is a long way from taking on the sort of powerful, long-term campaigns for better investment practices that was once its hallmark.

Returning to the issue of the board’s role in compensation decisions, the board clearly oversees and approves the performance reviews of the staff members below the CEO and CIO. Unless the performance grade dictates the bonus award and salary increase to the dollar (as opposed to determining a range in which managers make a subjective decision that the board then blesses), staff is operating subject to board approval, which means it’s arguable as to whether the minimalist CalPERS response is correct.

And a sanity check is that CalSTRS, which is generally much less forthcoming than CalPERS, conducts its compensation award process vastly more in the open than CalPERS does. We’ve embedded a document at the end of this post from November 5, 2015. If you scroll through it, it shows the awards for a large number of staffers, both the maximum percentage allowed under their plan and the level actually granted. In some cases, it also provides explanatory notes.

In other words, while CalPERS has moved forward, it has done so under duress. It’s discouraging to see CalPERS yet again refuse to walk its pro-transparency talk.

* We did not send a letter to JJ Jelincic, since per a state attorney general opinion, he is not permitted to vote on personnel and compensation matters by virtue of having a conflict of interest by being a member of CalPERS’ staff.