European creditors want to extract more blood from a stone, in this case Greece.

Greece and its lenders are again at odds over the latest “bailout” funds, which is €2 billion that was scheduled to be approved for release by the famed Eurobgroup (remember them? That’s all the Eurozone finance ministers) on Monday.

But a precondition for getting more dough was that Greece show enough “progress,” as in either have implemented or have committed to a sufficiently large number of “reforms”. “Reform” is Eurocrat-speak for austerian blood-letting. The creditors see Greece as coming up short.

As we’ve pointed out repeatedly in our coverage of Greece, the lenders are hell-bent on seeing Greece remake its economy in ways that are guaranteed to make their loans fail, or perhaps more accurately, produce even greater losses than if they allowed for more investment and spending, rather than insist on punitively high budget surpluses and other destructive measures.

Why this fixation on implementing failed policies? The reasons vary by actor, but they include: delusion (as in they believe austerity “works” as in makes economies better), political necessity/survival (governments that implemented austerity programs at high costs to their citizens can’t be seen to be letting the greatest profligate, Greece, get off easy), a fixation with morality (Greece must suffer pour decourager les autres).

But irrespective of the proximate causes of what looks like an exercise in sadism dressed up as economic orthodoxy, the creditors appear united, or at least united enough, to cram yet another set of punitive reforms on the already prostrated Greeks.

Here are the big issues where the two sides remain far apart:

Foreclosures. As part of the banking system bailout, the Troika wants more writeoffs of bad loans. They insist on a related measure, of lowering the value of homes that are subject to foreclosure from €200,000 to €120,000

Increasing the VAT on private schools to 23%. I’m a bit mystified by Syriza fighting this measure if “private schools” are academies for the wealthy. But if the Greek Orthodox Church operates primary and secondary schools, as the Catholic Church does in the US, it could affect a much larger number of students at much lower levels of family income. Input from informed readers appreciated. Mind you, Syriza is proposing to find the funds to cover up this income loss elsewhere, but apparently have yet to satisfy the lenders on this point.

As anyone who remembers the US foreclosure crisis will attest, almost without exception foreclosing on homes leads to higher losses than keeping the homeowner in place. There’s no reason to think the results will be any different in Greece. First, foreclosed properties cost money to secure and maintain and often deteriorate rapidly. In Greece, unlike the US, you have much greater risk of civil disobedience with foreclosures, in the form of squatting or vandalism (and we had plenty here that was purely economic, such as stripping homes of copper and appliances). Second, who will buy these properties? Foreigners are at risk of being threatened physically. And the idea of buying properties and turning them into rentals for the displaced homeowners hasn’t worked out for investors in the US, where we’ve had a so-so economic recovery and a strong bounce in house prices in the weakest markets. The outcomes would clearly be worse in Greece. And that’s before you get to the offset of higher social costs from more homelessness.

Similarly, it might have occurred to the creditors that the threat of a bank holiday, which then took place, led many citizens to pull as much as possible out of their bank accounts. So Greece, which already had a large black market economy, has if anything more cash in circulation to facilitate even more domestic tax evasion. One can argue that the taxable economy is in a death spiral. The more the creditors insist on higher VAT, the greater the incentive to deal in cash to avoid the VAT, which means lower VAT receipts than projected, which leads the creditors to call for higher tax rates. Greece already has a huge problem with tax avoidance; the current program for dealing with it reads like a prescription to make matters worse. Even tourists are wising up. A contact recently vacationed in Greece and took tons of cash, and got substantial price breaks and much happier vendors/service providers as a result.

Needless to say, Greeks are not putting their cash back in banks. From the Telegraph: 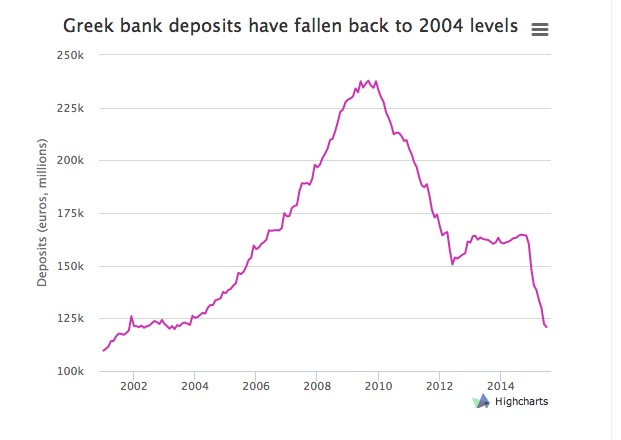 Tsipras is again trying to resolve the impasse at the “political” level, meaning going to Merkel Hollande, and Juncker. This has a Groundhog day feel. Before the end of June rupture that led the ECB to force a bank holiday to show Greece who was in charge, Tsipras repeatedly ran to Merkel and Hollande seeking a break from what the Troika was telling him. All that appeared to result was the two sides talking past each other. Merkel kept telling Tsipras that he had to work with the IMF, and Tsipras, by virtue of the fact that he was getting the attention of Merkel, appeared to convince himself that he could win her over despite the lack of any real movement on the creditor side. And as Greece kept making commitments and then reneging on them, which lead Greece’s counterparties to lose trust and get angry, the frustration level rose and the lack of progress gave the creditor an excuse to get rough with Greece to bring it to heel.

Unfortunately, as before, the creditors still hold the whip hand. They shuttered the banks before, which inflicted so much damage so quickly that Greece capitulated. Greek officials may have convinced themselves that the lenders would not dare be so brutal with Greece again, so soon. But if that is what they think, they have drawn the wrong lesson. Despite condemnation from some US observers and what passes for the left in Europe, the creditors did not seem embarrassed by the uproar. If the bad headlines associated with steamrolling an elected government and worsening a humanitarian crisis didn’t give the officialdom pause last time, there’s no reason to think that the spectacle of throwing homeowners on the street will bother them either. The German press no doubt will be full of stories about how many lived in these properties paying no rent for years. And the refugee crisis is a vastly bigger existential threat to the Eurozone. Indeed, perversely, leaders like Hollande and Merkel might find that uniting the Eurozone ex Greece against Greece is a very useful solidarity-building exercise.

There are some major wild cards. Merkel’s sponsorship of an effort for Germany and other countries to take more refugees in puts her at odds with popular opinion on the most heated topic in Germany. As other commentators pointed out, Maggie Thatcher’s fall was remarkably swift, and a Merkel ouster could be as well. But given that Merkel apparently likes Tsipras personally despite regularly disciplining him, and has often acted to moderate the policies of the powerful finance minister Wolfgang Schauble. If Merkel goes, Schauble would almost certainly become even more influential on the topic of Greece, which would not be a positive outcome. The anti-Eurozone Front National is looking even stronger by the day, with the migrant crisis playing right into its racism and xenophobia. Yet the Greek public has remained for the most part committed to staying in the Eurozone. And as we’ve pointed out, the operational issues of setting up a new currency are vastly more daunting and time consuming than economists and the punditocracy begins to understand.

So Greece is caught between a Scylla and a Charybdis. But unlike the myth, there’s no evidence that a path exists to navigate between them.