Short film about carbon dioxide, acidification of the oceans, and a request to support a lawsuit that forces the EPA to regulate CO2 under the Toxic Substances Control Act (source)
by Gaius Publius

When this excellent piece came out in Rolling Stone — “Goodbye, Miami” — I studied it carefully with an eye to digesting it for people with less time to read it than I had. Looking at the problem in Miami is a gateway drug to looking at the problem in all of south Florida. But there’s an easier way to see both. This article in Vanity Fair, “Can Miami Beach Survive Global Warming?” looks at just Miami Beach, the high-priced, brand-name town built on the sandbar that fronts the city of Miami itself, and it sees all of the same things. 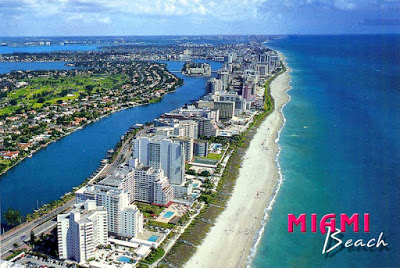 Multiply that multi-million-dollar cost to shore up the drinking and sewer problem by more than ten to get the cost to keep the drinking water salt-free for south Florida:

Construction costs alone will run about $6 billion to desalinate just one-third of the water used for southern Florida.

All of the pieces of the problem are present in just this one microcosm, Miami Beach. From the Vanity Fair article (my emphasis throughout):

In the summer of 2013, one of the leading candidates in Miami Beach’s mayoral race, a businessman named Philip Levine, released a TV commercial that showed him kayaking his way home through traffic in a Paddington hat and a plastic poncho, accompanied by his boxer, Earl, who was kitted out in a life jacket. “In some parts of the world,” Levine said in the spot, “going around the city by boat is pretty cool. Like Venice. But in Miami Beach, when it rains, it floods. That’s got to stop. Because I’m just not sure how much more of this Earl and I can take.”

Miami Beach does indeed have serious water issues. In the hundred years since it was incorporated as a city, it has repeatedly been pummeled by major storms, one of which, the Great Hurricane of 1926, wiped out buildings, tossed ships ashore, and remains, in adjusted dollars, the costliest hurricane in American history. Essentially a long, narrow barrier island, Miami Beach is surrounded by and infused with water. Biscayne Bay (which separates the city from its larger neighbor, Miami) lies to the west, the Atlantic to the east, and a large waterway, Indian Creek, cuts through the city for much of its length.

Compounding the city’s vulnerability to major weather events is the worldwide phenomenon of sea-level rise. Due to thermal expansion of the oceans and the melting of ice sheets and glaciers in the Earth’s far latitudes, the global mean sea level is rising. How fast and how much is a matter of debate, with such federal agencies as the U.S. Army Corps of Engineers, NASA, and the National Oceanic and Atmospheric Administration projecting, on the low end, eight inches of sea-level rise by the year 2100, and, on the high end, as much as six feet.

But Miami Beach, a low-lying city to begin with, is already feeling the effects of sea-level rise. Every time there’s a heavy rain, the locals brace for flooding on Alton Road, the main north-south thoroughfare of the city’s west side, as well as on smaller roads in the area, such as Purdy Avenue, where Levine filmed his commercial. The city’s bay side is more susceptible to flooding than its ocean side because it lies lower, less than two feet above sea level in some sections, and was built on cleared swampland that still wants to be what it used to be: a mangrove swamp.

On top of all this, Miami Beach must contend with a fairly new phenomenon that has come to be known locally as sunny-day flooding, in which Alton Road and its neighboring streets are awash in water even when no rain has fallen. This is a consequence of southeast Florida’s geology. Unlike, say, the island of Manhattan, whose bedrock is composed of hard, relatively impermeable marble, granite, and schist, Miami Beach and its neighboring towns sit upon a foundation of porous limestone. When the tides are at or nearing their seasonal highs—the highest, which occur in March and October, are known as king tides—seawater surges inward from the bay and the ocean, bubbling up through the limestone and infiltrating the sewer system. The very drains and gutters built to channel water off the streets function in reverse, becoming the conduits through which water gushes onto the streets.

About the cost to deal with the rising water:

[Mayor] Levine models himself after Michael Bloomberg, New York City’s mayor from 2002 to 2013—as a first-time officeholder whose wealth and outsider status allow him to bypass an entrenched political culture of intransigence and inaction. After he took office, in November of 2013, Levine fast-tracked a program to install electric pumps along Alton Road and other prime flooding spots on the city’s west side so that, during a storm surge or high tide, the pumps can be switched on, suctioning water off the streets and out into Biscayne Bay.

The cost of the program is huge, in the range of $400 million—for perspective, nearly the size of the city’s annual budget. So far, the results have been encouraging. In October of 2014, with just a handful of the 80 or so planned pump stations installed, the streets stayed dry during the season’s king tide, and, this season, the results have been much the same. Still, Levine told me, “We don’t declare victory. It’s one small step in a long war that we know we’re facing.”

Note that they’ve only just started installing the planned 80 pumps. And yet, wealth and optimism dominate the story. Who is Mayor Levine? A “self-made multi-millionaire who earned his fortune in the cruise-ship business.” And he’s leading a Michael Bloomberg-style building boom:

For all the sober talk about grave and ongoing environmental challenges, it is apt that Miami Beach has a self-styled Bloombergian mayor. For, curiously, at the very same time that some climate scientists are questioning whether the city will even survive into the next century, Miami Beach is going through an economic and building boom that evokes nothing so much as Bloomberg-era New York at its most sparkly and flash. In the last 12 months alone, the city has added more than 2,000 hotel rooms, many of them under impressive imprimaturs. Tommy Hilfiger is refurbishing the historic Raleigh hotel, and Ian Schrager has given the 50s-era Seville Beach Hotel a luxury redesign and a new name, Edition Miami Beach.

Which leads to a collision of ideas. Midway through the article, that collision is expressed this way:

Given the sheer amount of money, labor, and faith invested in Miami Beach, you get the sense that this hundredth-birthday boom just might be the one that will stick. But then, there is still the disquieting and unavoidable subject of sea-level rise. How can these two huge, concurrent phenomena, seemingly at odds, be reconciled?

Harold Wanless, chairman of the Department of Geological Sciences at the University of Miami and South Florida’s most prominent climate-change doomsayer, was emphatic when I put that question to him: “They can’t be.” The developers, he said, are “building like there’s no tomorrow—and they’re right!”

And the city’s response? The article quotes the mayor on that:

Nevertheless, as a pro-business Bloombergian, Levine sees no cognitive dissonance between fighting the seas and embracing the developers. The construction keeps the economy thriving, and the inflow of real-estate and hotel taxes helps pay for environmental initiatives—not just the pumps but also the city’s plans to elevate 30 percent of Miami Beach’s streets, replenish its oceanside dunes, heighten its existing seawalls, and create new urban greenspaces that will absorb water and carbon dioxide. By Levine’s estimation, these moves are buying Miami Beach 50 years, during which time, he is convinced, scientists will develop ingenious new ways to combat the problem.

“If, 50 years ago, I had shown you an iPhone and an iPad, and how FaceTime works, you would have thought I was insane,” Levine said. “So, 10, 20, 30 years from today, humankind will come up with amazing, innovative ideas that will create an even greater level of resiliency for coastal cities.”

There’s more in the article, but it’s more of the same.

Miami Beach is an economic collapse waiting to happen. If that house of cards falls, what’s the fate of mainland Miami itself, and south Florida as a region? I’ll leave you to decide. But in a storm-filled area, change can come suddenly. Even if it doesn’t, look just at the cost to maintain drinking water derived from an aquifer that’s porous and open to a rising sea. Six billion dollars is the estimated cost for south Florida, per the Rolling Stone writer. What if that cost doubles? At some point people will simply refuse to pay it, and move instead.

When that starts to happen, when people abandon the area for whatever reason, it’s over down there. We and they are sitting on a powder keg, whether it blows up quickly or slowly.

I have two bottom lines from this. People don’t have to say OMG and freeze. It’s still not too late to act (though that clock is ticking).

One way to act is to use force to create change. One way to use force is to use the courts. RICO and Martin Act investigations and prosecutions of Exxon and other fossil fuel companies count as force. Helping the lawsuit mentioned in the video above also counts as an attempt to use force. From their GoFundMe page (my emphasis):

I am a retired US EPA scientist. Last week the Environmental Protection Agency (EPA) denied a petition I filed with the Center for Biological Diversity under the Toxic Substances Control Act (TSCA). The petition asked EPA to stop ignoring the effects of CO2, which is not only altering our climate in dangerous ways, but is also causing the acidification of the oceans…and that’s killing corals, fish, other marine life and presents a danger to human health.

We have 60 days [ending roughly November 30] to file a civil suit to force EPA to comply with TSCA and regulate CO2. The courts seem like the only avenue available to address these two existential risks before it’s too late. This account is to help pay for that litigation….

By any definitions, carbon dioxide falls under the Toxic Substances Control Act, but the EPA refuses to recognize that. The lawsuit would use the court to force them to reverse course.

Another way to act, this time to educate, is to join the call for a World War II-style mobilization of national resources — to ask the government to stop fiddling, smell the fire, and start putting it out starting now. There’s a pledge and petition at ClimateMobilization.org that you can sign and work to implement. At some point, emergency mobilization will be the only choice.

How soon is too soon to put on the brakes? How late is too late to start? We’re not these people yet. Time to help stop the car?

The earlier the nation starts that process, the more it can accomplish. That Thelma-and-Louise moment could come a lot sooner than anyone is saying. Is the time to stop … now? (For more, see the second half of this Virtually Speaking episode, in which digby and I discuss exactly this issue.)