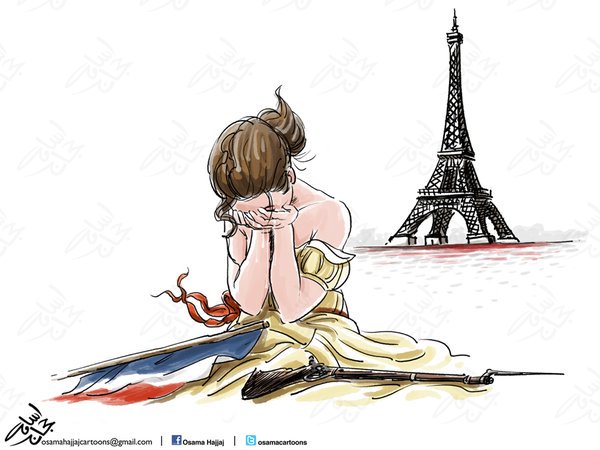 Better to wait a day before writing, after a night like that. What does one write after such a night anyway? And why write anything at all if you can be dead sure to always antagonize some one on some side of some spectrum, ideological or not, no matter what you write, unless you tag some safe official line, and even then, or especially then?

Better to soak in what the official media have to say, or so one might think. After all, they got all the resources and the reporters and the analysts and -access to- the politicians, and most of all the attention of the people.

Unfortunately, all that firepower -pun intended- is used only to tag official lines. To provide air space to ‘leaders’ who profess their utmost grief and sadness and anger and solidarity over barbarous criminal “acts of war” that they swear will be avenged with all the power they have. It’s so predictable it’s like all of their spin doctors have been sent on a Caribbean holiday at the same time, and together.

Still, it also doesn’t seem very appropriate to address the economic issues we usually talk about, at least not at first glance. Respect for victims and families must come first, that is a given. Then again, it does seem appropriate, out of that very same respect, to get to the bottom of what’s behind these attacks that will at final count leave perhaps 200 people dead on what started as a nice and balmy autumn evening in the city of lights. And the politicians’ truisms and platitudes don’t exactly help.

But how does one go about that truth finding? French President Hollande declared eerily early in the ‘game’ he was sure ISIS is behind the tragedy, and ISIS statements seem to confirm that conclusion. But what is ISIS? And where does it come from?

It’s no longer really credible to entirely ignore the role of the west, including France, in the origins of the ‘movement’, if it can be called that. From Al Queda to ISIS, and scores of groups and factions in between and beyond, there is at least some kind of link to western military action in the middle East. And that link goes back quite a few years, if not decades.

So if we really want to pay the kind of respect to the victims that comes with trying to figure out what’s behind these attacks, it would seem that we can’t get it done without a critical look at our own roles in what led up to this. Not to say that we’re the only guilty party, or that the perpetrators are not cuckoos, but to say we’re not credible if we completely ignore our own roles and don’t look in a mirror.

Hence, the first reaction we probably might want to have is that it’s enough alright with the ‘us’ vs ‘them’ meme. Even if, or exactly because, that reaction is, obviously, 180º removed from what the initial reactions to the attacks are, whether they’re provoked by media coverage or not. And they are. It cannot be only ‘us’ vs ‘them’. No black, no white. To understand this world you need a lot more than that.

If we try to phrase it that way, and we’re only halfway decent and honest about it, there’s no escaping that in the final analysis we indeed are them. We’re not like them, we are them. ‘We’ have spread terror, death and mayhem across the Middle East and North Africa (MENA) regions for a long time (to a large extent because that’s where the oil is, but that’s a story for a different day).

And then ‘we’ took it up a notch with the removal of the likes of Saddam and Gaddafi, leaving rudderless societies in their wake.

We can’t pretend to be honest and still ignore the fact that for many people in the Middle East a day like this Friday 13th is their everyday routine. And that that’s what makes them refugees. Many Parisians -or New Yorkers, for that matter- would do the same, get out of Dodge, if this were a common event in their city. Not only because of the danger and the fear, but also because there would be no functioning society or economy left, and hence no future.

No matter how you look at it, there’s no denying it’s kind of ironic that attacks on Beirut that were similar in many regards to the ones in Paris, even took place at the same time, and similar attacks on several other places, receive no media coverage at all in the west, while the Paris attacks dominate all western media.

That is not a coincidence. And it’s not either because most Americans would find it as easy to find Damascus or Beirut on a map as they would Paris. That is, they would not. But still Paris is on American TV about 48/7 (that’s the attention span limit), interrupted only by either a Kardashian body part -or two- or by the single The Donald’s body part that sticks in memory.

And that’s where we find our link to economics, because in geo-politics as in economics, we, all of us, think, talk and live exclusively in narratives. We have stories pre-fabricated for us, and these stories determine how we see the world, and our lives, and other people’s lives and dreams and wishes.

That is to say, whatever it is we want and dream of is per definition just and justified, and other people’s desires are not, as soon as they threaten to interfere with ours. As we read ad nauseam post-Paris in literally countless references to the ‘freedom’ that ‘we’ have and ‘they’ hate, and to ‘our way of life’ that is under threat -with nary a soul knowing what that way is.

We cannot forever fool ourselves and others into believing that we are the good guys and ‘the others’ are the bad guys. It’s tempting, and there’s a whole behemoth media apparatus to confirm it, but it doesn’t get us any closer to what happened, and why, and therefore no closer to paying our full and due respect to those who died in Paris on 11/13.

“They” don’t resent us for our freedom, “they” resent us for not allowing them to have their freedom, too. We need to recognize at some point that we owe our affluence to the misery of others, not to our superior intelligence or morals or religion or way of life. But there’s not a single voice among us which wants to make that recognition happen.

We are not a benevolent force, no matter what we tell ourselves or how many times we repeat it. We are a civilization of oppressors. Just like the Romans and the Mongols and so many others before and after. We seek to uphold our status and our wealth at the expense of others, of strangers, people who live conveniently far enough away in conveniently impoverished conditions.

We have been building our empire this way since well before Columbus, we’ve greatly expanded it over the past 500 years, and we’re now looking at the terminal phase of that empire. Just like the Romans and the Mongols and so many others before and after.

Interestingly enough, it’s our own technological prowess and ‘progress’ that leads us into that phase. The very moment we started exporting our oil drilling technologies, our smartphones, our databases and most of all our modern weaponry to what we still see as colonies, the very foundations of our civilization and our power started eroding.

But that’s getting too philosophical, and it would require too many words and lead us too far astray from Paris and the due diligence we owe those who lost their lives and those who mourn them.

Pope Francis said in a reaction to the Friday 13th attacks: “This is not human”. Unfortunately, 2000 years of Christianity say he’s dead wrong, wrong as he could be. This is very human. It’s as human as feeling an overbearing love for our children. It’s all human.

It’s very human, too, to go for the ‘us’ vs ‘them’ meme. Because it feels good, and you can be sure it makes those around you feel good too. Which is a big help in times of fear and insecurity and not having the answer, not having any other answers than the ubiquitous ones the media feed you.

But that still is not what the dead deserve. They deserve much more. They deserve that we try the best we can, not to settle for the first thing that comes to our reptilian minds. Not to make our entire lives come down to just fight or flight, but to attempt to find that area in between that is as close to truth finding as we know we can come.

To honor the dead, we need to look inside ourselves, and inside the societies we live in. And only when we’ve found, and eradicated, those things that make both us, and our communities, ‘guilty by association’ -for lack of a better term-, will we have paid proper respect to those who lost their lives.