As we discussed at the outset of this series, the linchpin to CalPERS’ effort to defend private equity is the claim that it delivers superior returns. It would thus seem logical to address that first.

But given that we’ve provided an example of the corrosive effects of the pay-to-play model in our post over the weekend on CalPERS’ scandal-ridden fiduciary counsel, Richard Klausner, we’ll start instead with another issue that came out of the private equity workshop: the misguided view that the trade group for limited partner investors, which is the Institutional Limited Partners Association (“ILPA”), can or will be able to force change from private equity general partners, and that CalPERS should therefore rely on ILPA as its main vehicle for winning reforms.

Astonishingly, the limited partner community ignores the wee problem that ILPA is bought and paid for by the general partners.

ILPA is an organization of roughly 300 major institutional investors, including public pension funds like CalPERS, private pension funds, foundations, endowments, and insurance companies. It is focused strictly on issues in private equity. From its bylaws:

Careful readers will notice the elephant in the room: that the interests of the limited partners and general partners are adversarial on key issues like fund terms and fees, but this anodyne mission statement doesn’t suggest how ILPA will “advance” its members’ interests, save by “promoting standards.”

Yet CalPERS’ staff and its important advisors, like its pension consultant, Pension Consulting Alliance (“PCA”), regularly argue that because CalPERS lacks the bargaining power to influence the private equity industry on its own, it therefore needs to work with other investors and most importantly to rely on ILPA to foment change. For instance, in CalPERS’ annual private equity program review. PCA acknowledged that there are “structural flaws in the prevailing private equity fund model,” and it gave ILPA prominent play as a remedy:

PCA continues to advocate that CalPERS collaborate with other large investors and increase its involvement with the Institutional Limited Partners Association to collectively pressure managers to accept important changes to the standard fund documentation.

Similarly, in CalPERS’ private equity workshop, on November 16, both CalPERS staff and external panelists reiterated this touching faith in ILPA. 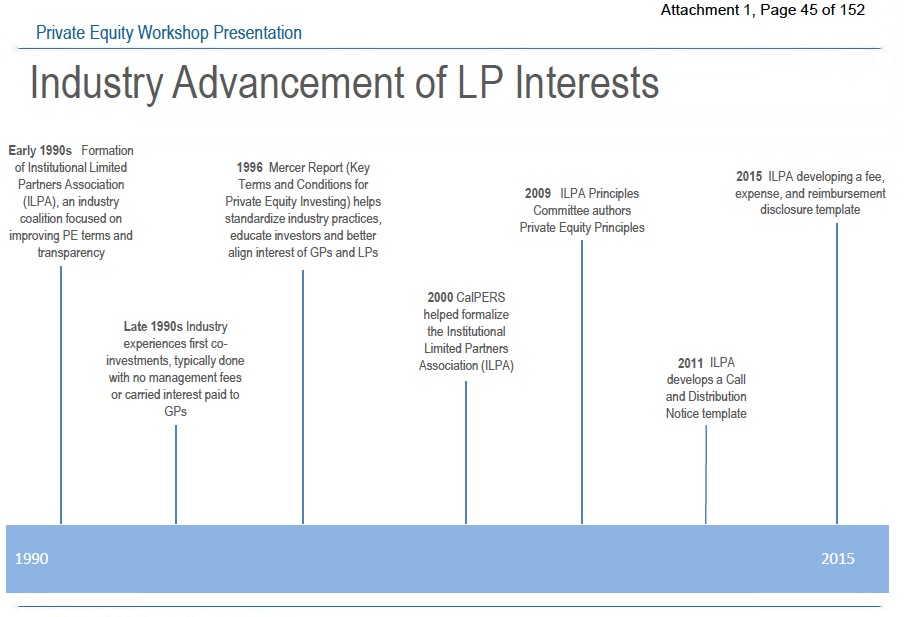 Réal Desrochers, Managing Director, Private Equity, CalPERS: It’s a big market, a growing market, CalPERS being about 1% of the market, cannot dictate terms, with our emphasis on working with the ILPA, getting transparency, with the new PEARS system [an in-house system to track private equity data] that we have also of getting the information we need on fee and carried interest and all of that. So I wanted that to be the lay of the land on the investment that we are investing with.

Ted Eliopoulos, Chief Investment Officer, CalPERS: That’s a good transition to now to Allan Emkin’s going to kick off a moderated discussion with our CIO guests as well as, with branching out to the committee as well.

Allan Emkin, Pension Consulting Alliance: Thanks, Ted. I think it’s much more important to listen to my two friends to my left, but just a little bit of context and background. The concerns about the need for this industry to be more investor-friendly is nothing new. Literally, from the time it started, which was in the late ’70s, the general partner had the dominant role in a negotiation and the limited partners had a choice: They could either sign a document or walk away. The world has changed. It’s still far, far, far from perfect, and all of the recent controversy, all the recent disclosures, evidence that there’s need for far more change in the industry. This exhibit [above] basically gives you a sense of the history of the Institutional Limited Partners Association, an organization designed to represent those people who literally as individuals have to negotiate with these highly sophisticated, highly compensated, very highly motivated organizations which want their money. And it’s very important to recognize that. The design of the organization was a reflection of the need for limited partners to work together to improve the marketplace and their perspective.

During the public comments section, we tried disabusing the Board of this idea at the end of our remarks before we were cut off, in violation of the Bagley-Keene Open Meeting Act:*

Another point I wanted to address briefly was the confidence this group places in ILPA. The fact is that ILPA disavows playing any advocacy role on behalf of limited partners. Kathy Jeramez-Larson, who was the executive director until mid 2015, said in an interview that she didn’t agree with using the term “advocacy” with respect to any of ILPA’s activities, and went on to state:

We don’t speak for our LPs at all. In fact, our members are quite sophisticated, and they have their own negotiations and own discussions with their GPs…. So I think we just are a facilitator to bring folks together.

This is the balance of our prepared remarks:

The best example of the ILPA’s unwillingness to advocate on behalf of its members’ interests was HR 1105, a 2013 bill that passed the House but died in the Senate. It would have ended SEC oversight of private equity firms. Had this bill passed, it would have directly harmed the interests of private equity LPs, yet ILPA took no position against it.

The reality is that ILPA is compromised by design. All you need to do is to follow the money. For example, we obtained the latest available ILPA tax return. It confirms the story you can easily put together from ILPA’s website.

In 2014, general partners paid more than $3.6 million for attending an ILPA event the purpose of which is, explicitly, to allow them to market themselves to LPs in a series of “speed-dating” presentations. Talk about pay for play! And, notably, many of the GPs that participate in this conference refuse to endorse the ILPA’s statement of principles, but the ILPA is unwilling to take even the very smallest step of advocating for its members interests by limiting the event to GPs that agree to live by its best practice standards.

Prior year tax returns show that the speed-dating event revenues, which all come from general partners, provide roughly 80% of ILPA’s total operating expenses.

So it’s hard to understand why limited partners have such faith in ILPA when it is owned by the general partners.

In the annual private equity review, which took place immediately after the workshop, Mike Moy of PCA (who heard only the first part of our takedown of ILPA) felt compelled to dispute the information we’d provided showing ILPA itself denying that it was an advocate for limited partners:

Mike Moy: And the idea that ILPA is not an advocacy group to me is just counterintuitive. The only reason you would have had it should have been for advocacy purposes, uh, because the playing field is very tilted towards the general partners and the only way the limited partners can level the playing field is to have a more cohesive spokesperson out there representing their interests.

Yet later in the same session Moy ‘fessed up that ILPA was not willing to take up the limited partners’ cause:

Board Member JJ Jelincic: You have previously been at least somewhat critical of the ILPA for not being aggressive enough in terms of really pursuing the interests of the LPs. Can you expand a little bit on some of that?

Mike Moy, Pension Consulting Allance: Well, it goes back to earlier this year, and I’m forgetting the exact… oh… the private equity managers were lobbying to be excluded from registration requirements with the SEC.

And I called up ILPA and said, “Aren’t you guys going after ’em? I mean, that’s crazy.”

So they sent out an e-mail to the membership, and this was, it may have been CII [the Council for Institutional Investors]. I was looking for someone who was actively going to take on the role of the limited partners and promote the idea that excluding or exempting them from registration was nuts. OK? And there was nobody really out there willing to step up and do it. And I find that stunning when I think about the amount of money that is being invested by pension funds and institutional limited partners and there’s nobody who’s really playing the advocacy role for them. I mean, I don’t understand that. That why I kind of say, the industry has to step up its game if it wants to make progress.

So ILPA reconfirmed to Moy what Jeramez-Larson said in public: ILPA does not see its job as pressing the limited partners’ interests in policy debates. And mind you, ILPA actually has a lobbyist on staff, which raises the question of what exactly that lobbyist is lobbying for.

Ironically, in the end, Moy and we agree. He acknowledged that ILPA will not carry the limited partners’ water and the investors have to take up the battle of seeking a better deal themselves.

But as the Kauffman Foundation said in the headline of its widely read but barely implemented 2012 report on the problems of investing in private equity, We Have Met the Enemy and He is Us, the biggest problem remains the investors themselves, particularly their learned helplessness.

And here we have the sovereign irony: This site has been a far more effective advocate for the interests of limited partners than any of the official mouthpieces or the investors themselves, by providing detailed information about bad practices, demonstrating that the limited partner claims of the need for secrecy around private equity documents are false via our publication of limited partnership agreements, and through our efforts to shame CalPERS and CalSTRS for their submissiveness and rationalizations of bad conduct.

Investors need to recognize that Fredrick Douglass’ view of patriotism applies just as well to settings where participants place tribal loyalties over doing what is best for their institutions:

I will hold up America to the lightning scorn of moral indignation. In doing this, I shall feel myself discharging the duty of a true patriot; for he is a lover of his country who rebukes and does not excuse its sins.

It’s high time for limited partners to take a hard look at how they are not mere passive victims but are active enablers of a lopsided power arrangement. And as we’ll discuss at the end of this series, there are steps they can take to address this imbalance.

We will continue our CalPERS Debunks Private Equity series next week.

* More on this in a later post; the short form is that the handling of the public comments violated California’s Bagely-Keene Open Meeting Act, and that witnesses were able to read a note from the general counsel, Matthew Jacobs, to the committee chairman Henry Jones advising him of that, yet Jones proceeded to willfully disregard Jacob’s advice.