Australian and Dutch police investigating the evidence of the shootdown of Malaysian Airlines Flight MH17 have gone public in disagreement with their superiors and with their governments’ political leaders. The split has opened between forensic investigators and police on the one hand, who say they aren’t convinced what weapon caused the crash, or who fired it; and politicians on the other hand, who blame the Kremlin.

Last month a senior officer of the Australian Federal Police (AFP) announced in The Hague, where a multinational team of investigators is fifteen months into gathering evidence for a criminal prosecution: “I’m sure we have everything we need by way of evidence.” Ian McCartney is an assistant commissioner of the AFP, and the most senior member of the AFP group working on the case to bring to justice those responsible for causing the MH17 crash and the deaths of all 298 people on board. Of those killed, 196 were Dutch nationals; 38 were Australians.

McCartney (above, left), according to an insider, is a “straight shooter”. But not on the prosecution of the MH17 shootdown perpetrators, according to his subordinate, Andrew Donoghue (right). Donoghue is the AFP detective superintendent in command of the Australian officers in the Joint Investigation Team (JIT) in The Netherlands and in Ukraine, which is responsible for collecting the evidence of criminal responsibility, and assembling an indictment for the courts. The JIT was created in August 2014 by the governments of The Netherlands, Australia, Ukraine, and Belgium,. For more details, including the conflict with the Malaysian government, which has been excluded from key parts of the investigation and then erased from the press record, see this and this.

Donoghue has contradicted McCartney, saying last month: “We’re not at the stage of being able to say enough in terms of evidence and credible witnesses.” In short, no identification of perpetrators, no court case to answer — not yet. Donoghue went on to express doubt that more time for the investigation will produce an indictment, or an effective prosecution. “If the brief [indictment] is presented, it’ll be good enough [but] I’d say we still have twelve months’ work ahead of us, and taking other similar incidents as a benchmark, it [might] be five or 10 years before this case is closed.”

The AFP says its six officers in Kiev have conducted “hundreds” of interviews with Ukrainians claiming to have been witnesses on the ground. The AFP claims also to have analysed photographs and videotapes of the scene, plus audiotapes provided by Ukrainian and US intelligence agencies of chatter among Novorussian combatants. According to Donoghue, no witnesses have been interviewed by Australian officers in the area of the crash itself in the Donetsk region of Ukraine because it is controlled by the Novorussian forces and by the breakaway Novorussian government. The Australian government won’t allow its police to negotiate with the Novorussians. Malaysian government officials who have done so have been excluded from the JIT.

“Kharkiv is the limit [for Australian investigators]”, Donoghue has said, identifying the nearest Kiev-controlled territory to the crash scene, more than 300 kilometres to the southeast. The detective has added: “People with direct evidence of what they saw, smelled and touched, but in many cases we can’t approach them or get them to a safe place.”

Donoghue has acknowledged the evidence is uncertain and unlikely to be admissible by conventional court standards. “In Australia, we’d have control of it [the crash area] for as long as we needed – recovery [of the victims] would have been methodical; and in parallel, we’d be doing forensics to ensure we controlled the integrity and the chain of custody of the evidence.” Donoghue has conceded that only after the wreckage from the crash scene was flown to The Netherlands could the investigators be confident “it could never be tampered with again.”

The Sydney Morning Herald published these contradictory statements of the AFP officers in its newspaper on October 16. Ten days later, it had not appeared online on the paper’s website. Reporter Paul McGeough confirmed this from Washington, DC, where he is the Herald’s US correspondent, but he was surprised by the omission of his story, and could not explain why. Subsequently, the report has been published in this online version. 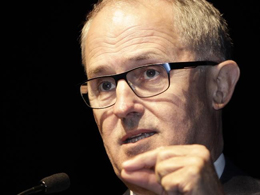 McGeough has reported his personal conviction that the Kremlin is to blame for the MH17 downing, and “Moscow’s intransigence” for delay in prosecution. Tony Abbott, the Australian prime minister at the time of the crash — July 17, 2014 — explicitly blamed the Russian Government. His successor, Malcolm Turnbull (right), has been less explicit. Turnbull said in a letter last month to families of the Australian victims: “We are focused on all possible options for prosecuting those responsible, with a view to securing due punishment for this crime.” Turnbull is so far refusing to issue the statutory certification of what caused the crash, in order for the government to pay compensation. Click for more details.

Turnbull has blamed the Russian government for vetoing a United Nations tribunal to prosecute the case outside international law. Turnbull was reacting to the release on October 13 of the Dutch Safety Board’s report on the MH17 case. The disagreements and contradictions among the Australian officials were revealed a few days later.

The newly published version of what the AFP is now saying reveals even more than the newspaper included in its edition of October 16. Donoghue admits he and his investigators “don’t have an ability to go back to the scene to do our own inquiries. We can’t go east of Kiev.” Donoghue also confirms the Ukrainian government controls everything the other national investigators on the JIT can investigate. “Everything we do,” Donoghue is quoted as saying, “is independently reviewed by each of the countries involved – and sometimes that review is done jointly.” This confirms the Ukrainian veto provisions in the secret JIT agreement, which the AFP refused to release publicly last December.

The public airing of Australian police scepticism towards the MH17 evidence follows the decision by Victorian state coroner Ian Gray to classify secret all autopsy evidence collected by Australian coronial pathologists from the bodies of victims. Gray acted after autopsy results had been published in Australia and internationally. This evidence revealed the absence of missile shrapnel in the bodies of the Australians, casting doubt on the claims of a Buk missile warhead as cause of the crash, and of Russian culpability in the deaths. Gray’s new secrecy order came after he had been briefed by government officials. On their recommendation, Gray is also refusing to set a date for an inquest into the cause of death for the Australian victims. For details, read this.

Australian experts on coronial law say Gray’s actions are an unprecedented violation of the law. One inquest specialist said: “As the Coroner [Gray] is required to make a finding as to the cause of death. He has several options and the only possible one is that the victim was killed by an unlawful act. In order to reach that determination he has to utilise the pathologist’s findings.” Other Australian lawyers believe Gray has been told by government officials that if he holds an inquest, and the pathologists’ evidence is introduced in court, it will be open to lawyers for the victims’ families to attack the credibility of international claims of Russian culpability.

In The Netherlands there has been a similar effort by Dutch government officials to suppress autopsy evidence from the victims’ bodies. For details, read the case of the Dutch government’s attempt to discredit one of its senior pathologists on the JIT, George Maat (below, left). For Maat’s recent charges of political interference, media falsification, and infowar, read the interview he gave on September 29.

Recently the Dutch prosecutor leading the JIT, Fred Westerbeke (above, right), has made public acknowledgements similar to the AFP disclosures. On August 11, Westerbeke said: “we are still not 100 percent sure” of the Buk missile evidence. He was also publicly uncertain on evidence for the perpetrators. “We hope to move on the international identification of suspects.” On October 11, two days before the DSB announced its report, Westerbeke told the Dutch press: “We are getting closer to legal and convincing evidence.”

The public statements of the DSB chairman, Tjibbe Joustra, leave no ambiguity. He blames the Russian government for providing the missile, the command-control system which fired it, and the subsequent concealment of the perpetrators. According to Joustra, he knows who they are, and that the Russian government is “not rushing at all to deliver people”. Joustra told a Dutch reporter that although he’s sure he knows the Russians were the perpetrators of the MH17 crime, he is pessimistic they will ever be brought to court. “Joustra never lets anything just fall out of his mouth,” the Dutch reporter claims.

Westerbeke has said nothing in public since then.

For readers interested to open the encyclopedia of infowar on MH17, here is a collection of reports by a group of independent Dutch, German, American and British investigators, who have examined each element of the evidence so far published.