A generation ago, a Greek prime minister, whom the Soviet Politburo in Moscow underestimated, defeated a Turkish attack on Greek territory. That was Prime Minister Andreas Papandreou; the victory was the battle of the Aegean of March 26, 1987. Before that, no Russian had defeated a Turkish attack for more than a hundred years. Since 1991 Russians say Turkey has been “not merely a close neighbour, but a friendly state.”

Papandreou prepared for his fight with the knowledge his enemies judged him a coward. He also had the hope that if he struck hard and fast enough, his enemies would be confounded and retreat. The decision also included Papandreou’s private wager that one way or another, he might not have long to live himself. So he moved the Greek air force, targeted and fully armed on 90-second order for take-off. He planned with the Bulgarian President Todor Zhivkov, an enemy of NATO, to order his tank columns towards the Turkish border, allied against the common historical enemy. He ordered the electricity supply cut to US command-and-control headquarters in Greece. Not a spark, not a signal from foreign spy or Greek traitor warned the Turks, the Americans, or the Russians of Papandreou’s war plan.

Papandreou had decided the previous January that if he didn’t go on the offensive, the Turks would advance in the Aegean airspace, and on the seabed, taunting his weakness. The US would then overthrow him in Athens, he expected. In the outcome of the battle, there were no casualties. The Turks withdrew their forces without the Greeks firing a shot. Except for the Turkish prime minister, Turgut Ozul – he had to be evacuated to Houston, Texas, suffering from a weak heart. Ozul’s survival was one salvage the Reagan Administration could manage at the time. Papandreou’s agreement to switch on the lights at the Nea Makri communications base was another.

That victorious episode has not been repeated by any of Turkey’s historical adversaries, including post-Soviet Russia. Igor Sechin, the former deputy to President Vladimir Putin, was a leading advocate of forgetting Russia’s historical lessons for dealing with the Turks, and disdaining to learn new ones. Putin was reluctant to learn them until yesterday.

1. Turkey never makes a military move without getting Pentagon approval first. In order for yesterday’s shoot-down of the Su-24 to take place as it did, a battery of signals intelligence and other electronic warfare means would have been deployed by a joint US-Turkish command unit, giving the Turkish F-16 pilot confidence he was taking the Russian pilot unprepared. It was not, as the Turkish Government has announced, “an automatic response to our airspace being violated” because the airspace was Syrian, unilaterally claimed by the Turks to be their “exclusion zone”. Neither was it, as Putin has announced, a “stab in the back” from the Turks. Nor was it, as Putin added, “despite the agreement we have signed with our American partners to prevent air incidents”. What happened was full frontal – it was because of the agreement the Turks have with the US military command. Nor can Putin have been genuinely surprised that “instead of immediately establishing contacts with us, as far as we know Turkey turned to its NATO partners to discuss this incident.” Had Putin said he suspected that Turkey turned to “its NATO partners” before the “incident”, he would have been closer to the truth.

2. Aggression by Turkey and the US can be defeated by a smaller force, but it must be in constant readiness, employing every form of early warning and disguising its force by surprise. Putin has said the Russian Su-24 was struck by a missile fired by a Turkish F-16 when the Russian aircraft was one kilometre inside the Syrian side of the border. That being true, Russian air defence support for the fighter must have been tracking the Turkish aircraft from the second it started its take-off roll. It ought to have tracked its course upward, and monitored its missile-arming electronics and such fire orders as came from elsewhere. The Russian warning and control operators and the Su-24 crew should have detected the hostile fire-radar, and had the option to jam it. If none of these things was done on the Russian side, alerting the Su-24 crew to their peril, the Russian forces weren’t ready, and the Su-24 was taken by surprise. The consequences cannot be explained by the commander-in-chief telling a visitor – the King of Jordan pretending to call the Russian president his “brother”: “we will never turn a blind eye to such crimes as the one that was committed today.” Blind is the word for it – before, not after. 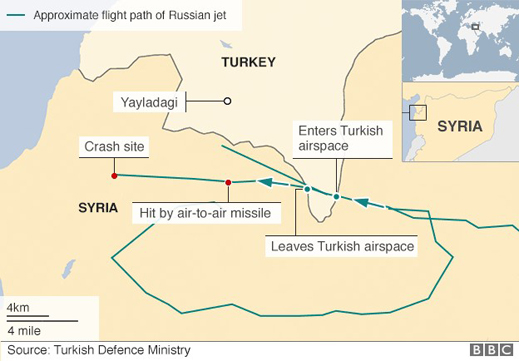 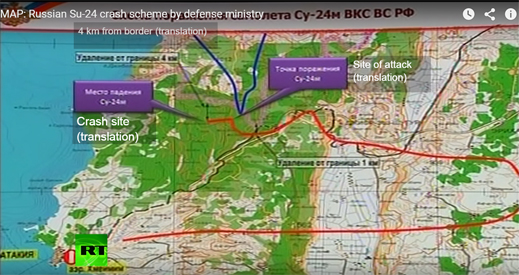 3. In western Europe, in the Balkans, and in the Middle East the Turks have no durable friend or ally. For Russian strategy not to be ambushed by the Turks, it must have strong allies like Iran, weak ones like Cyprus and Serbia, and vacillating ones like the Bulgarians, and listen to their experience of warfighting with the Turks. It is a waste of breath to try reassuring Ankara that Russia’s “plane and our pilots were in no way a threat to the Turkish Republic in any way.” That’s because the Turks know we know they are threatening, as well as financing the break-up of the Russian Caucasus. It’s because they know Russia is committed to blocking Turkish expansion, and to protecting Shiite Iraq and the Kurds from Turkish attack. If these aren’t the new strategic commitments, then Russia should hasten to withdraw its forces before it falls into more bloody ambushes. If they are the new commitments, then the consequences are as obvious as they are immediate.

All Russians are now at risk if they travel to Turkey, so President Recep Tayyip Erdogan’s exclusion zone should stop all Russian flights and all Russian nationals from entering the country.

Time, too, for the Turks to warm their houses and cook their dinners with someone else’s gas.