Yves here. The post below is likely to stir up a great deal of controversy among Serious Economists, since it makes two important claims. The first is that countries experiencing liquidity traps suck other economies into them. This might give a whole new meaning to the idea of contagion. Second, having the reserve currency is not a hot place to be in a liquidity-trap-afflicted environment.

But as interesting as this discussion is, it also has the unfortunate effect of increasing the fixation with monetary policy. As Warren Mosler said via e-mail, another way to look at this paper is that it proves “Nothing more than insufficient deficit spending.”

On 11 August 2015, the People’s Bank of China devalued the yuan. Although modest in size, the devaluation signalled a turning point in China’s willingness to let the yuan appreciate, or remain stable, against the US dollar. On 22 October 2015, Mario Draghi signalled that the ECB was willing to adjust the “size, composition and duration” of its quantitative easing (QE) programme. In short, the ECB will soon be pumping more liquidity into a flagging Eurozone economy. The euro quickly fell 1.67% against the dollar. Many market analysts expect the Bank of Japan to expand its massive QE programme either at its late October meeting or in the near future, putting further downward pressure on the Japanese yen. Over the last 24 months, the dollar is up nearly 10% against a major currencies index of its trading partners. Against this background, the Federal Reserve postponed yet again the ‘normalisation’ of its monetary policy at its October meeting, a decision observers attribute in part to the appreciating dollar. Welcome to the global zero lower bound economy!

In Caballero et al. (2008a,b), we argued that the (so called) ‘global imbalances’ of the late 1990s and early 2000s (Figure 1) were primarily the result of the great diversity in the ability to produce safe stores of value around the world, and of the mismatch between this ability and the local demands for these assets. In particular, we highlighted the US as the main producer of (safe) assets, and China, oil-producing economies (especially the Middle East) and Japan as the main sources of demand for these stores of value. The growing global shortage of safe assets imparted a strong downward secular trend to world real (safe) interest rates for more than two decades. Capital flows acted as the propagating mechanism by which the asset-scarce regions dragged asset-rich regions’ interest rates down. 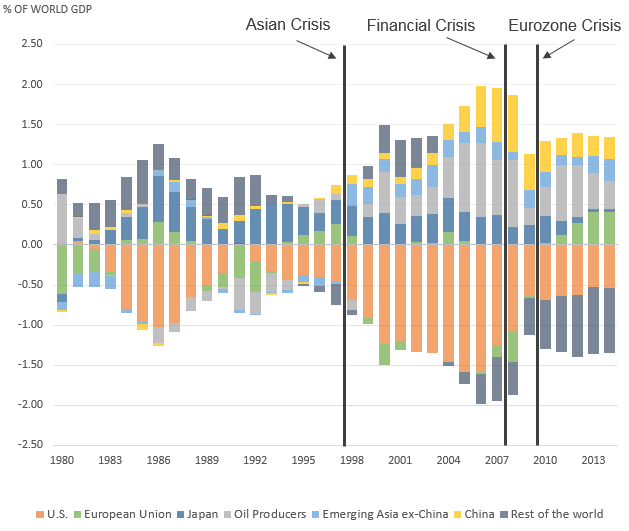 Much has happened since then. Following the subprime and European sovereign debt crises, we entered a world of unprecedented low natural interest rates across the developed world and in many emerging market economies. With natural rates so low, the equilibrating mechanism we highlighted in our previous work has little space to operate, since nominal interest rates are constrained by the zero lower bound (ZLB). Indeed, Figure 2 shows that global nominal interest rates have remained stuck at the ZLB since 2009. Yet the global mismatch between local demand and local supply of stores of value remains. 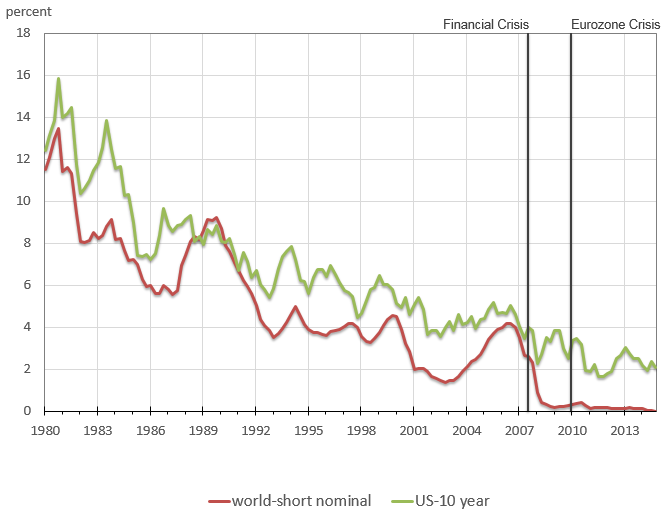 How does this global mismatch play out and shape global economic outcomes when global equilibrium real interest rates are extremely low? The importance of this question was illustrated vividly by the blog exchange between former Fed chairman Ben Bernanke and former Secretary of the Treasury Larry Summers in April 2015. While Summers (2015) argued that we may have entered into an age of ‘secular stagnation’, Bernanke (2015) replied that if the US entered into a persistent liquidity trap, capital would flow out of the US, depreciating the dollar and boosting US economic activity. In short, Bernanke argued that exchange rates and capital flow would prop up the US economy, at the expense of its partners.

In Caballero et al. (2015) we address this question systematically, with a simple and tractable framework. We ask: How do liquidity traps spread across the world? What is the role played by capital flows and exchange rates in this process? What are the costs of being a reserve currency in a global liquidity trap? How do differential inflation targets and the degree of price rigidity influence the distribution of the impact of a global liquidity trap? What is the role of (safe) public debt and government spending in this environment?

The main contribution of our recent work is to provide a simultaneous and coherent answer to these questions. In our model, once real interest rates cannot play their equilibrium role any longer, global output becomes the active margin: lower global output – by reducing income and therefore asset demand more than asset supply – rebalances global asset markets. In this world, liquidity traps emerge naturally and countries drag each other into them.

How do Liquidity Traps Spread Across the World?

Our benchmark framework is a perpetual-youth overlapping generations model with nominal rigidities, designed to highlight the heterogeneous relative demand for and supply of financial assets across different regions of the world. Given the nominal rigidities, output is aggregate-demand determined as soon as the global demand for financial assets exceeds their supply, at the ZLB.

We first show that in a stationary world in which all regions of the world share the same preferences for home and foreign goods (i.e. without home bias), unitary trade elasticity, and financial markets are fully integrated, there is an all-or-nothing result: either all regions experience a liquidity trap, or none. In other words, financial integration can either prove a bane, as it lifts a country off of the liquidity trap it would otherwise experience under financial autarky, or a curse it if pulls a country into a global liquidity trap it would otherwise avoid under financial autarky.

Home bias and non-unitary trade elasticities can attenuate but not overturn this result. More importantly, the relative severity of these traps varies depending on a region’s relative supply of and demand for financial assets, and on the level of the exchange rate. We turn to these next.

What is the Role Played by Capital Flows in This Process? A Metzler Diagram in Quantities

What is the Role Played by Exchange Rates in This Process?

Our model uncovers a fundamental degree of indeterminacy, related to the seminal result by Kareken and Wallace (1981) that the nominal exchange rate is indeterminate in a world with pure interest rate targets. This is de facto the case when the global economy is in a liquidity trap, since both countries are at the ZLB. In our framework, however, this indeterminacy has substantive implications since money is not neutral. Different values of the nominal exchange rate correspond to different values of the real exchange rate and therefore different levels of output at home and abroad. This means that, via expenditure switching effects, the exchange rate affects the distribution of a global liquidity trap across countries. This implication creates fertile grounds for ‘beggar-thy-neighbour’ devaluations achieved by direct interventions in exchange rate markets.

Thus, our analysis speaks to the debates surrounding currency wars. The recent exchange rate depreciations in Japan and the Eurozone fit well within this mechanism, as illustrated in Figure 4, and so does Switzerland’s currency floor during the height of the European crisis and its subsequent removal. Also, the recent Chinese slowdown is consistent with a country that has a structural shortage of safe assets, but whose currency is factually ‘pegged’ to an appreciating US dollar. 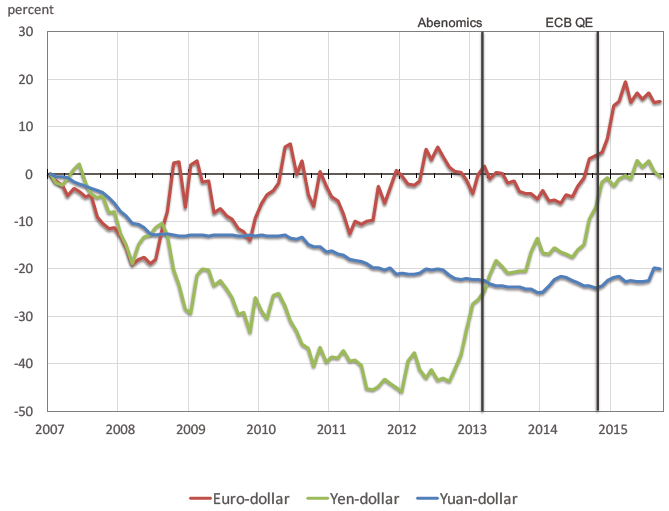 What are the Costs of Being a Reserve Currency in a Global Liquidity Trap?

How do Differential Inflation Targets and the Degree of Price Rigidity Influence the Distribution of the Impact of a Global Liquidity Trap?

As usual, inflation is important because higher expected inflation reduces the impact of the (nominal) ZLB constraint. Beyond this, we show that unlike the all-or-none result of the benchmark model with fully rigid prices, it is possible for some regions of the world to escape the liquidity trap if their inflation targets are sufficiently high. We also show that wage flexibility plays out differently across countries and at the global level. In a global liquidity trap, inflation rates are equated across countries, so as to equate real interest rates. It follows that countries with more downward price flexibility bear a smaller share of the global recession. At the global level, however, more downward price flexibility tends to increase global real interest rates, pushing the global economy further into recession.

What is the Role of (Safe) Public Debt and Government Spending in This Environment?

Our model is non-Ricardian, which gives a role to debt policy. Both issuing additional debt or a balance budget increase in government spending can potentially address the net shortage of assets and stimulate the economy in all countries, alleviating a global liquidity trap. They are associated with large Keynesian multipliers, which exceed one in the case of government spending. They also worsen the current account and net foreign asset position of the country undertaking the policy stimulus.

World interest rates and global imbalances go hand in hand: countries with large safe asset shortages run current account surpluses and drag the world interest rate down. Once at the ZLB, the global asset market is in disequilibrium: there is a global safe asset shortage that cannot be resolved by lower world interest rates. It is instead dissipated by a world recession, which is propagated by global imbalances: surplus countries push world output down, exerting a negative externality on the world economy. Economic policy enters a regime of increased interdependence across the world, with either negative or positive spillovers depending on the policy instrument. Exchange rate policy becomes a zero-sum game of currency wars where each country seeks to depreciate its exchange rate to stimulate its economy, at the expense of other countries. In contrast, safe public debt issuances and increases in government spending are positive-sum and benefit other countries beyond the frontier of the issuer.

Unfortunately, this state of affairs is not likely to go away any time soon. In particular, there are no good substitutes in sight for the role played by US Treasuries in satisfying global safe asset demand. With a mature US growing at rates lower than those of safe asset demander countries (as highlighted by The Economist in October 2015), its debt and currency are likely to remain under upward pressure, dragging down (safe) interest rates and inflation, and therefore keeping the world economy (too) near the dangerous ZLB zone.

While we are at the early stages of experimentation with negative policy rates, it is highly unlikely that the space in this direction is large enough to make a first-order difference to the ZLB logic. Moreover, there is nothing magic about ‘zero’ interest rates per se, as the mechanism carries more broadly to scenarios where interest rates have limited space to be the main equilibrating variable.