Income inequality has shot to the top of the public debate in the US and elsewhere. One typical reply – especially in the US, the ‘land of opportunity’ – is that what matters is equality of opportunities, not equality of outcomes.

If children born into disadvantaged environments have a decent shot at getting to the top of the income ladder, static inequality measures would matter much less. Indeed, Alesina and La Ferrara (2005) argue that Americans are relatively averse to redistribution exactly because they perceive income mobility to be relatively high.

Today, however, such intergenerational mobility is not exceptionally high in the US. Corak (2013) shows that US mobility is lower than that of most other developed countries. In recent research we look into whether the US ever was the land of opportunity and if so, when the ladder got pulled up.

Obtaining historical estimates of mobility is challenging because of the absence of readily available data that allow linkages across generations. In our recent work, we overcome this barrier using a unique methodology that exploits the fact that first names carry rich information about socioeconomic status (Olivetti and Paserman 2015). The goal is to take a long-run perspective and track social mobility in the US between 1850 and 1940.

To illustrate our approach, suppose rich men named their sons Edward in 1850, while poor men named their sons Sam. One can then look at how Edwards and Sams are faring in 1880 to get clues about social mobility across generations. If the 30-year-old Edwards are on average better off than the 30-year-old Sams, we would conclude that intergenerational mobility is relatively low.

The same idea can be applied to fathers of Emmas and Sallys to study how daughters’ economic status (proxied by their husbands’ occupational income) is related to that of their fathers. This procedure allows us to estimate mobility consistently over time and for both genders, and to identify long-run trends in intergenerational mobility.

This increase is consistent with the findings of other authors (e.g. Ferrie 2005, and Long and Ferrie 2013), who document a marked decrease in men’s intergenerational mobility in the US between the late 19th century and the second half of the 20th century.

The intergenerational elasticity between fathers and sons-in-law displays a similar trend between 1870 and 1920 (mostly flat between 1870 and 1900, and a sharp increase between 1900 and 1920), suggesting that there was a substantial degree of assortative mating. 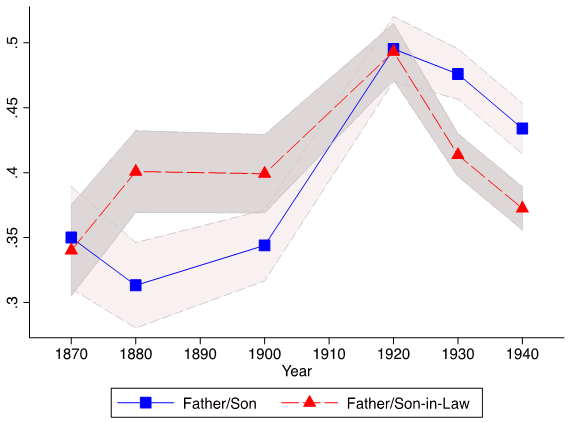 A higher elasticity means that income differences are more persistent, so intergenerational mobility is lower. Our finding of a sharp increase in elasticities between 1900 and 1920 is very robust, suggesting that this was a key inflection point in the evolution of mobility in the US.

The industrial revolution did not spread uniformly across the US. Regional income diverged significantly in the second half of the 19th century. By 1900 income per capita in the south was barely half of the national average (Kim and Margo 2004). If fathers and sons tend to live in the same region, large economic disparities across regions will translate into a high correlation between father’s and son’s income.

Our findings suggest that the ‘Great Gatsby curve’ documented in cross-sectional data (either across countries, Corak 2013, or across US states, Chetty et al. 2014) is an empirical regularity that can also be found in time series data.

Alesina, A and E La Ferrara (2005), “Preferences for Redistribution in the Land of Opportunities”, Journal of Public Economics.

Chetty, R, N Hendren, P Kline and E Saez (2014), “Where is the Land of Opportunity? The Geography of Intergenerational Mobility in the US,” Quarterly Journal of Economics.

Corak, M (2013), “Inequality from Generation to Generation,” in (R. Rycroft, ed.) The Economics of Inequality, Poverty, and Discrimination in the 21st Century, ABC-CLIO.

Ferrie, J P (2005), “History Lessons: The End of American Exceptionalism? Mobility in the US since 1850,” Journal of Economic Perspectives.