Patient readers, I’m sorry I dropped a stitch yesterday; I was indeed on the road. Pro tip: Never put your power cables in a different suitcase from your machines. I carry my machines with me at all times, but without power, they’re bricks. And there were other excitements.

“Recently there have been news reports that Republicans are going to delay TPP until after the 2016 elections. Do not be misled; this is a bargaining ploy” [Dave Johnson, Campaign for America’s Future]. “They want the Obama administration to make “side agreements” that give corporations even more.” Side deals on tobacco and pharma.

“Unlike most liberals, Sanders recognizes that power relations between the rich and the rest of us determine policy outcomes” [In These Times].

Sanders: “To be truly free you need economic rights” (in discussion with Killer Mike) [The Hill].

“Iowa Poll: Parties deeply divided on national security” [Des Moines Register]. I’m not so sure. American exceptionalism seems like a bedrock assumption for most voters in both parties. So they’re just arguing over price.

“One major donor to [Clinton’s] Super PAC, Priorities USA, is Donald Mullen Jr., [who] while a Goldman Sachs employee, pioneered the trades that allowed the mega-bank to profit from the collapse of the housing market. Mullen’s team utilized financial instruments called collateralized debt obligations to essentially bet against subprime mortgages” [The Intercept]. “In 2012, Mullen left Goldman Sachs to do the opposite of what he did in 2007: He started a hedge fund, the purpose of which was to buy up foreclosed homes and rent them out. Mullen gave $100,000 to [Clinton’s SuperPAC], Priorities USA Action on June 30. According to Federal Election Commission data, this is the largest single contribution he has made to any soft money organization in his giving history.” Ka-ching.

Polls: “Most horse-race polling is not terribly predictive precisely because it gives you a snapshot in time, and that time is still many days away from Iowa. The ground is always shifting beneath us” [Down with Tyranny]. Also, “Trumpf.” Personally, I prefer Il Douché, but perhaps that’s too subtle.

Republican Debate: Everything you need to know [Politico]. I recently saw Mad Max: Fury Road… For those of you familiar with the iconography of “road warrior” franchise, you remember the guy chained to the front of the buggie? With the gimp mask on? That would be Jebbie. Unfortunately, I can’t find a proper image…

Republican Debate: Rand Paul gets to sit at the adult table [Bloomberg].

“Donald Trump, unsurprisingly, is the most-covered candidate in the race. In fact, he alone has gotten more airtime (234 minutes) than the entire Democratic field (226 minutes)” [WaPo].

Trump rally “repeatedly interrupted by protesters and marred by several scuffles” [The Hill].

“[F]or Trump to [launch] a serious independent candidacy would require him to get his name on 50 different state ballots, which is ordinarily a tricky endeavor” [Fortune]. But Trump already filed as a Republican in Texas, and to run as an independent there, would have had to change his filing to independnent yesterday, Monday. He didn’t.

Iowa: “Clinton has the support of 49 percent of Caucus-goers compared to 39 percent for Sanders” [Alternet]. Axelrod: “Clinton, as former Secretary of State, is benefiting the most from ‘voters’ growing concerns about international problems, including the rise of ISIS terrorists.'” Never let a crisis go to waste….

Consumer Price Index, November 2015: No change [Econoday]. “This report is in line with the Fed’s outlook, showing an easing, at least to a degree, in deflationary pressures. But still falling fuel prices are definitely a live risk to the Fed’s inflation hopes.” And: “One of the Fed’s mandates. The ‘headline’ number is below target due to the energy impulse, but the ‘core’ rate, led by services, is on target” [Mosler Economics].

Empire State Mfg Survey, December 2015: “Factory activity continues to contract in the New York manufacturing region and especially, unfortunately, employment and the workweek”  [Econoday]. “[T]here are pluses in this report led by a big gain for the six-month outlook…. The gain reflects greater optimism for new orders and shipments but no greater optimism for employment where hiring is expected to be no more than moderate.”

Shipping: “The number of 500+ teu [Twenty-Foot Container Equivalent Unit] containerships idled will hit a record high by the end of the year, according to French analysts Alphaliner. [Longshore and Shipping News]. “A total of 329 ships equivalent to 1.4m teu – equivalent to 7% of the global fleet – were laid up by the end of November, up by 23 ships from a fortnight prior. Laid up ships leapt by 400,000 teu in November are on course to break December 2009’s all time record of 1.5m teu soon. This comes despite a marked uptick in the number of ships being sent for scrap.”

Banking: “Because the J.P. Morgans and Bank of Americas of the world are sitting on troves of account (i.e. balances, inflows / outflows), spending (i.e. transaction-level purchases), and risk (i.e. delinquency, write-off) data, they’re able to underwrite credit with more predictive certainty and confidence” [Tech Crunch]. “Alternative lenders, on the other hand, have to work with rudimentary datasets that are (1) not comprehensive and (2) non-proprietary.”

Honey for the Bears: “A Pessimist’s Guide to the World in 2016” [Bloomberg]. This is a listicle of memes. And for a double helping…

Honey for the Bears: “Here’s Everything That Could Go Wrong in 2016” [Bloomberg]. This is reportage. However, the memesters under bloomberg/graphics apparently don’t talk to the reporters under  bloomberg/news, since the “guide” does not map to “everything” and vice versa.

The Fed: “Federal Reserve policy makers risk making a mistake that will be difficult to correct if they raise interest rates on Wednesday, according to former U.S. Treasury Secretary Lawrence Summers and economist Nouriel Roubini” [Bloomberg].

“So then we begin to ask: what visuals are we normalizing in exchange for media coverage from news outlets that don’t view our survival as a priority? How does our grieving process change if we’re forced to do it publicly? How does healing change if the trauma we witness has to be publicized in exchange for sympathy from largely unreliable swaths of the population? What does it mean to fight anti-black violence and advocate for the value of black lives by publicizing visuals of our death?” [Salon]. This is the visual side of the “too many hash tags” coin.

“A man whose bid to become a police officer was rejected after he scored too high on an intelligence test has lost an appeal in his federal lawsuit against the city” [ABC]. “The court said the policy might be unwise but was a rational way to reduce job turnover.”

The headline: “As Health Care Act Insurance Deadline Nears, ‘Unprecedented Demand’,” seemingly due to the “Healthy Communities Challenge,” where cities compete with each other for enrollment [New York Times]. Fourteen paragraphs down: “Administration officials declined to provide enrollment data for the 20 cities they said were participating.” Apparently, the only other data point we have that suggests unprecedented demand is that the site crashed. I can think of other reasons for that.

“While there are areas of the country still significantly challenged, Vietnam has had significant success in controlling so-called third world diseases like malaria. The “western diseases” that we are so used to in the USA—diabetes, hypertension and coronary artery disease—are sharply increasing, as is the incidence of cancer” [Hippo Reads]. In other words, Vietnam replaced a biological bloodsucking parasite, the mosquito, with a social bloodsucking parasite: Big Food. Good general overview of medicine, globally.

“This day in history: An Iraqi journalist threw his shoes at George W Bush (2008)” [Vine].

“Global demand for U.S.-made missiles and so-called smart bombs has grown steadily since their use in the first Gulf War. But the United States and a host of allies are now rushing to ensure a stable supply of such weapons for what is expected to be a long fight against Islamic State, whose rise has fueled conflict in Syria and across a swathe of the Middle East” [Reuters]. Ka-ching.

“As American intelligence agencies grapple with the expansion of the Islamic State beyond its headquarters in Syria, the Pentagon has proposed a new plan to the White House to build up a string of military bases in Africa, Southwest Asia and the Middle East” [New York Times]. Ka-ching. Who’ll build them? Halliburton?

“Eighty percent of the world’s super rich grew richer last year. Anticipating what they want – often before they know it themselves – is now a full-time occupation at some brands” [Telegraph]. “Net-a-Porter has an elite army of 35 multi-lingual personal stylists who travel the globe bringing their expertise and services directly to the client. Dolce & Gabbana, Louis Vuitton and Chanel have teams dedicated to ring-fencing large areas of the world’s more scenic destinations for their next Alta Moda or Métiers d’Art shows. All of these brands invite clients for several days of spectacular dinners, private parties and complementary cultural events, be it an exceptional camel tour of the desert or a boat trip to the designer’s residence.” How repellent.

Fueled largely by the vast streams of wealth crossing the globe as never before, a new generation of hyper-luxury homes with stratospheric price tags is colonizing the most gilded hillsides and canyons of Los Angeles. In some areas, every third or fourth home has been torn down, leaving gashes of dirt and debris where new mansions will rise.

Here, as in other roosting places of the superrich, the recent influx of foreign money has gone hand in hand with the rising use of shell companies…

And we know what accumulates under roosts….

“The Hong Kong-based civic group China Labour Bulletin says strikes and labor protests nationwide nearly doubled in the first 11 months of 2015” [Wall Street Journal, “China’s Workers Are Fighting Back as Economic Dream Fades”]. “Behind the strife is an economy decelerating faster than the government expected, sparking layoffs and factory closings.”

“Under an employment model, by contrast [to the precariat model], the company has a much more reliable and knowledgeable work force, one that can be held to a specific standard of quality and a more consistent schedule. Company executives said the additional 20 to 30 percent in costs have more than paid for themselves” [New York Times].

“The number of female billionaires is growing faster than the number of their male counterparts. …. [T]he report also highlights the fleeting nature of great wealth, finding that only 126 billionaires or 44% of the class of 1995 are billionaires today. It underscores the strategies these prevailing billionaires have employed to build and preserve lasting legacies” [UBS/PwC Billionaire Report]. I’ll bet.

“On the morning of Jan. 1, 2016, anyone with a cell phone more than five years old will be unable to access the encrypted web — which includes sites like Facebook, Google, and Twitter — according to a new plan to upgrade the way those sites are verified” [Buzzfeed]. “[I]n some parts of the developing world up to 7% of internet users could find themselves suddenly cut off from the world’s most popular sites,” adding up to around 40 million people.

“The [Telegraaf] says the Ukraine secret service SBU, which is delivering a large part of the [MH17] evidence, is currently surrounded by rumour and potential corruption which may have an impact on the reliability of key material in the case” [Dutch News]. Nobody could have predicted… 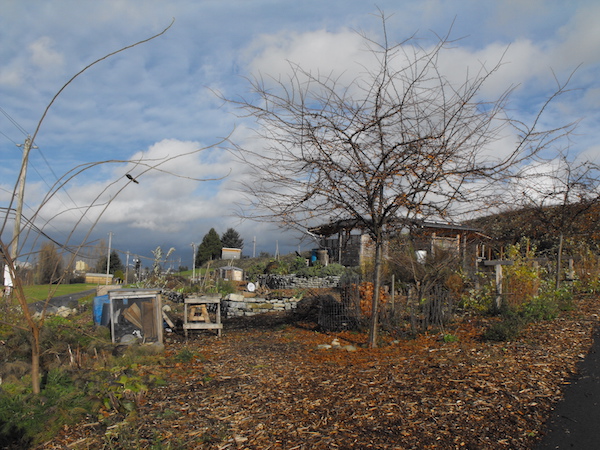 Readers, you know I love food forests, so I hope you’ll indulge me with one more from RS. (And if you have projects like this of your own, please send them along!)