Yves here. John Helmer has been patiently following the continuing (yes, continuing) investigations into the MH17 downing. The latest twist is that both the Australian police and Dutch prosecutors do not agree with the Dutch safety board’s claim that they have proven that the plane was brought down by a BUK missile.

The Australian Federal Police and Dutch police and prosecutors investigating the cause of the crash of Malaysian Airlines MH17 believe the Dutch Safety Board (DSB) has failed to provide “conclusive evidence” of what type of munition destroyed the aircraft, causing the deaths of 283 passengers and 15 crew on board.

Testifying for the first time in an international court, Detective Superintendent Andrew Donoghue, the senior Australian policeman in the international MH17 investigation, said a “tougher standard than the DSB report” is required before the criminal investigation can identify the weapon which brought the aircraft down, or pinpoint the perpetrators. Their criminal investigation will continue into 2016, Donoghue told the Victorian Coroners Court (lead image) on Tuesday morning. He and other international investigators are unconvinced by reports from the US and Ukrainian governments, and by the DSB, of a Buk missile firing. “Dutch prosecutors require conclusive evidence on other types of missile,” Donoghue said, intimating that “initial information that the aircraft was shot down by a [Buk] surface to air missile” did not meet the Australian or international standard of evidence. 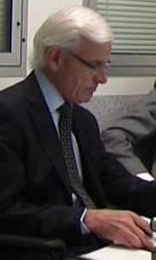 The Coroners Court in Melbourne is the first in the world to hold an inquest into the MH17 crash on July 17, 2014, and the cause of death of those on board. Iain West (right), the deputy state coroner presided, after the state coroner, Judge Ian Gray, withdrew at the last minute. The inquest opened for a single hour of hearing on Tuesday. A second hearing is scheduled for Wednesday, when West will announce his findings. In the UK, where an investigation into the death of 10 British nationals, is being supervised by Leicestershire coroner, Catherine Mason, all court proceedings have been suspended without a date being set for inquest. It was reported in the Melbourne court that British post-mortem experts participated in the Dutch investigations, alongside Australian, Dutch, and German teams, plus a joint Indonesian-Malaysian group.

In the Melbourne courtroom press reporters outnumbered representatives of the families of several of the victims. Of the 28 Australian citizens killed, 11 were from Victoria state; 10 were permanent residents of Australia; and 3 had close ties to Australia. A local newspaper owned by Rupert Murdoch reported from the courtroom “the Kuala Lumpur-bound Malaysia Airlines flight… was hit by a Russian-made surface-to-air missile over eastern Ukraine”. In fact, Donoghue of the AFP said this was an unverified claim by the DSB for “a missile of a type previously provided to Ukraine.”

In court, in addition to members of the Coroner’s staff, there was one government intelligence agent who kept his official identification tag inside his coat, and refused to say whether he was an Australian or American national.

Donoghue (below, left) was the lead witness. He continues to direct a team of 22 Australian police, forensic specialists and intelligent agents stationed in The Netherlands and Ukraine. He was followed by Dr David Ranson (right), a Victorian pathologist who led a team of 4; they worked at the Dutch military base at Hilversum in July and August of 2014, after the bodies of the MH17 victims were taken there for identification and forensic analysis. Donoghue said a full report by the AFP had been included in the coroner’s evidence. Ranson has filed two reports with the coroner – one of August 25, 2014, and one on December 16, 2014. So far the Coroner has classified these documents as secret. For details, read this.

Testifying on oath, Donoghue revealed for the first time that the Australian government had quietly negotiated two agreements to investigate the crash site in eastern Ukraine. The first, he said, was with the Ukrainian government in Kiev for security around the crash site. The second was with Novorussian leaders in order for the Australians to carry out their searches for victims’ bodies, personal property and other evidence, as well as to run a command post in Donetsk city. Political recognition by the Australians of the separatists has never been acknowledged before. Donoghue refused to say who signed the agreement for the Novorussians.

For the first time also, Donoghue acknowledged publicly that the international investigators had had “no ability to collect aircraft parts or other debris”. It was not until May 2015, he added, that forensic examination of the aircraft began. 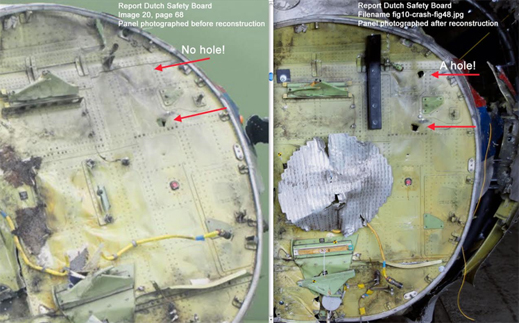 The recovered aircraft wreckage was first photographed and registered in The Netherlands by the DSB. Image-1 shows the first DSB photograph, with a single hole visible. Image-2 shows that a new photograph published by DSB reveals a second hole. See here.

In his testimony Donoghue said that ten months after the crash, and after Kiev officials had handed over less than half the fuselage fragments to the Dutch, the discovery was made of “some fragments not consistent with debris of the aircraft”. Had he found shrapnel from an explosive device, missile or cannon? Donoghue refused to answer. The deaths of the passengers, he testified, had been caused by “inflight breakup [of the aircraft] and immediate decompression”, not by munitions. The lack of shrapnel as evidence of cause of death is analysed here.

Australian police calls for Ukrainian witnesses on the ground, who may have seen or heard what happened on the fateful day, were issued in March 2015, and then again in June. Some of those who came forward to testify refused to do so, Donoghue said Tuesday, unless the Australian and Dutch police protected them in “a safe location”; excluded Ukrainian government officials; and kept the identities of the witnesses secret.

Ranson, who is an associate professor of forensic pathology and deputy director of the Victorian Institute of Forensic Medicine, told the court he and his team had spent two and half weeks studying the victims’ bodies at Hilversum. There, he confirmed, X-rays and CT scans were carried out and more than 700 autopsies. He testified that when the Australian victims’ bodies were repatriated to the morgue at the Coroners Court, another CT scan was taken of each body, and matched against the scan taken at Hilversum. Ranson’s reports ruling out the presence of shrapnel from a missile strike in any of the MH17 bodies have been kept secret to date.

On oath, Ranson told Coroner West the deaths of the passengers had been caused by the aircraft breaking up. He dismissed the possibility that an oxygen mask found on a body on the ground had been worn by the victim. There was no DNA evidence to support that, and little likelihood, Ranson said, that the high-speed airflow through the aircraft at decompression would have left oxygen masks on the victims, if they had time to put them on. Death came too fast, Ranson believes.

The court heard that the survivors of the crash victims have been regularly briefed and counselled by Australian Government officials. They have also been coached not to answer press questions, although one admitted his family had been allowed to meet lawyers. Three statements were given in evidence at the inquest by representatives of the victims. One from members of the Van Den Hende family — Shaliza Dewal, her husband Hans Van Den Hende and their three children Piers, 15, Marnix, 12, and daughter Margaux, 8, were killed – said media reports of the crash were unreliable and unconvincing: “we are unsure who or what to believe.