It isn’t exactly certain what the Turkish military saw on a foredeck deck of the Russian Navy’s landing ship, Caesar Kunikov, as it passed through the Bosphorus Strait last Sunday. What is certain is that the Turkish Foreign Ministry declared the Russians had launched “a pure provocation” at Turkey, and that the Turks would react with matching force. “The necessary answer will be given in situations deemed to be a threat,” announced Mevlüt Çavuşoğlu, who has been foreign minister for 12 days.

Hurriyet, a Turkish newspaper, identified the source of its photograph as the Twitter account of “photographer Emre Dağdeviren”. The photograph has disappeared from that source, if it ever was there.

The London media also went on the attack. The Guardian published a photograph, but the caption, “Photograph: None”, failed to identify the source or the authenticity. The Financial Times reported its Istanbul correspondent as saying it was “a particularly chilling incident.” With more caution, Reuters claimed that the Turkish television channel NTV “broadcast photographs that it said showed a serviceman brandishing a rocket launcher on the deck”. Reuters wasn’t sure what had happened, or whether the photographs had been fabricated; but the Reuters headline declared “Turkey [was] angered by by rocket-brandishing on Russian naval ship passing Istanbul.”

The Caesar Kunikov is a Project 775-type large landing ship of the Russian Navy, built in 1986. Assigned to the Black Sea fleet and homeported at Sevastopol, it is named after a Jewish naval infantry officer who was killed in action in the Arctic in 1943. The vessel has been recorded by the Turks as making several round-trips through the Straits this year. 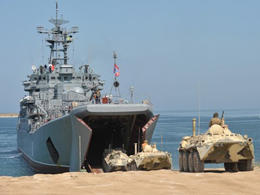 A Turkish Navy source claims: “According to the Montreux Convention any Black Sea nation must inform Turkey 8 days before the passage of its warship. 14 days have passed since the shooting of the Russian fighter plane. If Russia wanted to reinforce its fleet off the coast of Syria with warships from the Black Sea Fleet these ship would have been passing through the Turkish Straits in last 5 days. We have seen the southbound passage of 3 military landing ships (Korolev, Saratov, Caesar Kunikov) and northbound passage of 4 military landing ships and 2 auxiliary cargo ships (Caesar Kunikov, Yamal, Minsk, Korolev, Yauza, Dvinitsa-50) in the last 15 days.”

The Turkish Navy site mistook the “pure provocation”, dating it two days before the Turkish foreign minister made his claim. “One of the most documented and discussed passages was the one of Caesar Kunikov. During the southbound passage of this ship on 4th December 2015, a single sailor carrying what appears to be a 9K38 Igla (SA-18 “Grouse”) was photographed. The commanding officer of a warship has the duty to take all necessary precautions to protect his ship and his crew. But the show with the single Sa-18 was neither funny nor logical. If the missile was against Turkish Air Force it was definitely not enough, if the missile was against Daesh Air Force it was too much since they do not have any planes yet. So it was just a gesture to annoy.”

According to the Hurriyet report, Foreign Minister Çavuşoğlu declared: “For a Russian soldier to display a rocket launcher or something similar while passing on a Russian warship is a provocation. If we perceive a threatening situation, we will give the necessary response.”

The Igla (Russian for “needle”) is manufactured by KB Mashynostroyeniya (KBM), and is designed to defend against aerial targets at ranges of up to 6 kilometres, and altitudes of up to 3,500 metres. It is standard issue for Russian troops. It is also used by regular armies worldwide. These include the Turks, who have been reported in London as having supplied the Igla rocket systems to rebel groups they manage in Syria for attacks against the Syrian government’s forces. 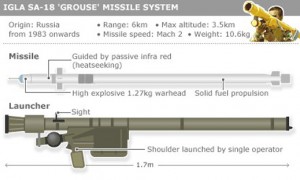 Its infra-red homing system may also be adapted for targeting fast speedboats threatening larger warships. In the case of an explosives attack by a speedboat against the US Navy destroyer, USS Cole, in Aden port (Yemen) in October 2000, the destroyer’s rules of engagement did not allow on-board guards to fire on the approaching boat without first obtaining permission from a senior officer. 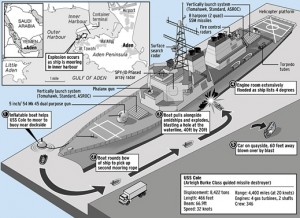 Seventeen US sailors were killed in the attack. In subsequent assessments of the incident, the USS Cole’s commanders and their superiors were criticized for their lack of readiness to fire in self-defence.

A Turkish Foreign Ministry summons to Russian Ambassador Andrei Karlov took place in Ankara on December 7. The next day a Russian Foreign Ministry statement by spokesman Maria Zakharova said there had been no violation by the Caesar Kunikov of the Montreux Convention, the international treaty of 1936 which regulates vessel passage through the Bosphorus. For more on the treaty, read this. “Protection of the vessel is the legitimate right of any crew,” Zakharova said. “When our diplomats asked the Turkish side what exactly it finds to be a violation [by the Caesar Kunikov], apart from anything intelligible in the abstract reference to international legal norms, we have not heard a reply.”

The Russian spokesman said the ministry has photographs of a Spanish Navy mine-hunter, the ESPS Tajo (below), making its way through the Bosphorus in July of this year with its crew at gun stations. 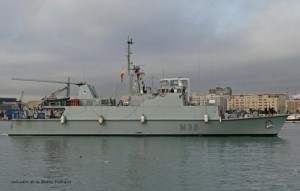 “For some reason the picture of the armed heavy machine-gun sentry on the deck of a Spanish warship caused no questions from the Turkish side, and the media did not raise the issue”, Zakharova said. “The Russian ship [Caesar Kunikov] did not violate a single article of the Montreux Convention of 1936 governing the issues of navigation in the Straits, as well as the relevant provisions of the Turkish regulations”, she added.

The Montreux Convention does not grant Turkey sovereignty over the straits. Instead, it says navigation and transit are a collective security subject “in the Straits of the Dardanelles, the Sea of Marmora and the Bosphorus comprised under the general term ‘Straits’ in such manner as to safeguard, within the framework of Turkish security and of the security, in the Black Sea, of the riparian States.” Russia was,still is, one of the riparian states of the Black Sea.

The pact has several provisions regulating the tonnage of warships and the armament of auxiliary vessels defined as “specifically designed for the carriage of fuel, liquid or non-liquid”. But there is no power for the Turks to dictate what arms may be carried or displayed by foreign warships. Article 13 of the Montreux explicitly exempts the master of a warship sailing through the Straits from having to notify the Turks of its armament or of anything but its intention to pass. “When effecting transit, the commander of the naval force shall be without any obligation to stop, communicate to a signal station at the entrance to the Dardanelles or the Bosphorus the exact composition of the force under his orders.”

Moscow’s leading independent military analyst, Gennady Nechayev of Vzglyad, said of the deployment of Igla-type arms on board vessels under way in the Bosphorus, “this is absolutely unremarkable. The Montreux Convention recognizes the right to armed guards on passing ships. If you look, there are hundreds of photos of seamen with arms or manning fire control systems during passage in the Straits.”

“Another point is of interest. Our ships have also been accused of the fact that now they do not make a salute when passing the flag of Turkey in its territorial waters. Yes, there is such an unwritten tradition, but it is nowhere recorded as binding. The decision to raise or not to raise the flag is taken solely by the vessel captain. Let the Janissaries rejoice that noone shows them the latrine [the head] from the deck. That was the British tradition in sailing days.”