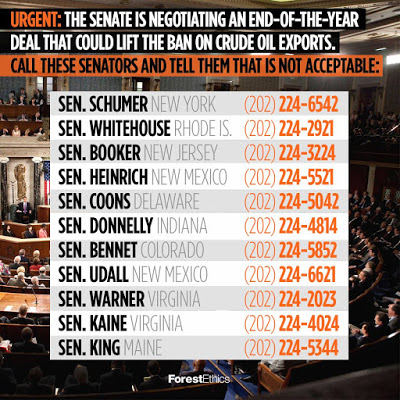 Thanks to the people at ForestEthics, we have key Senate phone numbers for you in nice graphic form. Be sure to add Barbara Boxer to the call list — (202) 224-3553.

Short and brutally ugly. This is an all-hands-on-deck moment. The White House is reportedly the chief negotiator on behalf of Big Oil’s attempt to lift the crude oil export ban. As part of the government shutdown negotiation, the White House, in collusion with Democrats in the Senate, is willing to lift the crude oil export ban in exchange for “renewable energy … conservation benefits … and other party priorities” (see below for this language). More here; search for “oil”.

To be clear, lifting the four-decades-old crude oil export ban would be a disaster. In particular, it would:

Bottom line, President “good on carbon” Obama and the White House are the driving force behind a Big Oil top priority, if it can traded for “other party priorities.” For perspective, realize we have to strangle fossil fuel production and consumption, not enable it, to have a hope in hell of surviving the chaos that’s about to be locked in. Obama, the Republicans, and every Democrat in Congress who votes Yes to lifting this ban is voting to end your children’s future, not preserve it.

(They probably think their own climate-chaos exit is secure, as Chris Hedges notes here: “Those who are despoiling the earth do so for personal gain, believing they can use their privilege to escape the fate that will befall the human species.” I’m not sure they’re going to escape successfully. The carbon-enabling elites had better be living in Sweden, with Blackwater mercs surrounding their isolated compounds, when the cascading collapses occur — though I’m not sure Sweden, or Canada, will let them all in.)

Make no mistake. While the world works hard on a deal in Paris to stave off carbon emissions, the White House and the Senate are brokering a deal (currently S.1372) to “pave the way for the US to become a petro state,” as one commenter put it. 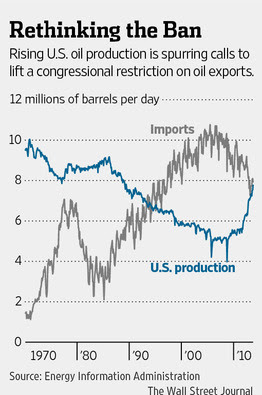 Feeding the beast that kills us. Crude oil production needs to be strangled, not given new markets (source).

For more, here’s Elana Schor, writing in Politico (no link; subscription only):

The White House on Tuesday declined to rule out accepting a Congressional measure to allow U.S. oil exports for the first time in four decades, a potential signal to senior Democrats who are considering striking a deal with the GOP to overturn the ban in exchange for other party priorities.

The White House “continues to oppose” a legislative provision rolling back the decades-old ban on exporting U.S. crude, spokesman Josh Earnest told reporters, “but I’m just not going to get into a detailed list of things we are going to veto or not veto.” …

“All the efforts of his climate negotiators in Paris could be blown away by this one boneheaded appeasement of Big Oil,” Johnson said.

One official at a group fighting to preserve the export ban said environmentalists are concerned that the White House’s “door [is] wide open for wheeling and dealing and trading.”

Some in the White House “think there’s a way to get a good conservation package” in exchange for allowing oil exports, said a source off the Hill who is closely tracking the talks who requested anonymity. …

Though Johnson slammed as “unconscionable” the growing openness among some Democrats and green groups to a trade-off that would roll back the export ban in exchange for renewable energy and conservation benefits, that willingness to compromise showed no signs of abating on Tuesday.

The so-called “green groups” are not innocent bystanders. Many are enablers, along with so-called “liberals” like Barbara Boxer:

Sen. Barbara Boxer (Calif.), top Democrat on the Environment and Public Works Committee, shrugged off environmentalist fears about trading conservation and renewables’ benefits for oil exports. There is “division” among green groups over whether to cut a deal, she said in a brief interview. “I’ve heard environmentalists say this is a great opportunity; others say it’s not,” she said.

Any deal would also likely include some type of aid for refineries in the Northeast that have benefited from cheap domestic crude that cannot be exported currently. Sen. Tom Carper (D-Del.) said he said he is in discussions for an approach “to make whole American refineries that in many cases would simply go out of business” should exports be permitted.

House Minority Whip Steny Hoyer (D-Md.) told reporters that oil exports were not objectionable enough to sink a possible deal on their own.

Ending the 1970s-era ban on exports, the year’s top priority for the American Petroleum Institute, is “not where we want to go,” Hoyer said. “But on the other hand, if there were substantial agreements by the Republicans on some things that we thought were very important, that might be something” to consider during the budget talks.

Among the perps are some of the solar companies, who would get a small benefit for themselves from a Democratic “compromise.” For example:

SolarCity CEO Lyndon Rive, head of the nation’s biggest rooftop solar power company, fueled talk of a deal that would marry clean-energy tax benefits with conservation funding – as well as other Democratic priorities – during an interview in Paris yesterday. If allowing exports “in return, enabled us to have long-term visibility into continuing to incentivize and promote solar, then I think that’s a fair trade,” Rive said.

Another perp is the National Wildlife Federation. Yes, NWF is supports the deal. Feel free to read their sell-out logic for yourself. One reason we can’t have nice climate is our enemies. The other is our “friends,” like NWF, Barbara Boxer, Barack Obama and the rest of that crew.

What You Can Do

The deal is not done, and the carbon part of the shutdown negotiation may be sabotaged for any number of reasons, including your opposition. But it’s an all-hands-on-deck moment. If your senators are listed below, please call them now and say, “To keep the earth habitable, the ban must stand.”

Senate phone numbers here. You can also support the strongest pro-climate candidate in the presidential race, Bernie Sanders (adjust the split any way you like at the link).

The deadline for the biggest climate tipping point — irreversible warming to an uncivilized planet — is less than 10 years away, by my estimation, if we do nothing to stop the carbon industry and its lust for money. Ten years — which means we should be permanently decelerating emissions as aggressively as possible, and doing it now. Everything on the climate front is happening faster than anyone predicted — sea level rise, glacial melt, everything. Preserving the crude oil ban is at least as important is stopping the Keystone pipeline, and likely more so, given the number of other pipelines we continue to build.

This really needs to stop, these accelerating emissions — by which I mean, be stopped. Please, if they won’t take action, you still can. Because frankly, if we don’t manage the chaos that’s on the horizon, it will manage us, and I hear chaos is a very bad manager.