It got somewhat lost in the hoopla of the jobs report and the blistering rally in the stock market on Friday. But the US trade deficit worsened by 3.4% in October to $43.9 billion, according to the Commerce Department, once again disappointing soothsayers who’d hoped for an improvement in the trade deficit.

But as bad as the overall trade deficit is, the trade deficit in goods (without services) is much worse, and even then, the oil trade covers up just how terrible the underlying trade of non-petroleum goods really is, how far and how fast non-petroleum exports have plunged, and how much US manufacturing is getting whacked.

The worsening trade deficit was a nasty “surprise” – nasty because it dings US economic growth; and surprise because it appears inexplicably difficult for Wall Street economists to predict a downhill slope.

Exports add to GDP, and imports reduce GDP. So when imports exceed exports, the sacred US GDP figures get hit as they have been since the 1990s. But October was bad: exports of goods plunged 10.4% year-over-year to $123.8 billion, the worst level since June 2011.

The culprits: the strong dollar that makes US goods more expensive in other currencies, and tepid economic growth in the rest of the world, with some major markets in a recession, or a deep recession, such as Russia, or even worse, such as Brazil. The China slowdown isn’t helping. But in the case of exports to China, the dollar can’t be blamed since the yuan is pegged to the dollar, and the recent devaluation was tiny compared to the moves of other currencies.

Credit must be given to the shale oil revolution – and to the many billions of investor dollars that have been drilled into the ground where they have now disappeared without trace!

But this flourishing oil trade covers up the terrible deterioration in the non-petroleum trade deficit. It’s volatile from month to month, but the trend is clear: in October, it worsened by 25% year-over-year, to $56.8 billion, after an all-time worst of $59.3 billion in August. Before this year, the worst had been $47.8 billion – in December 2014!

This chart shows just how fast and how far the non-petroleum trade balance (blue line) has plunged, while the net petroleum deficit (black line) is on the way, if this trend continues, to a surplus: 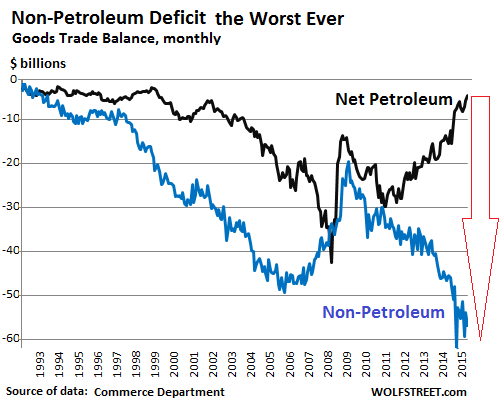 This swoon in non-petroleum exports explains in part the malaise in US manufacturing. What the regional manufacturing indices have been saying loud and clear for months, the national Manufacturing ISM Report On Business finally confirmed: for November, the index fell to 48.6 (below 50 = contraction), with new orders dropping to 48.9, not a good harbinger for the future. It was the first contraction since November 2012.

Bad as it is, it has been propped up by the massive US auto manufacturing sector that has been flying high, pumped up by cheap credit, loose underwriting standards, extended loan terms, loan-to-value ratios that exceed 100%, the rising proportion of subprime loans, and of course, securitization of these loans [read… What Happens When the Auto-Loan Boom Blows Up].

And auto manufacturing is still hot, fired up by US auto sales that might soon set an all-time record in unit sales and has already set all-time records in dollar sales due to higher vehicle prices. 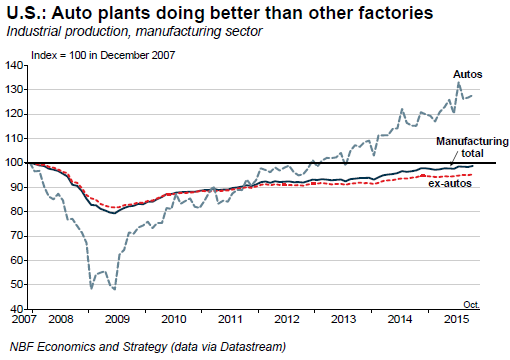 NBF’s report notes that factory production excluding autos is still 5% below the pre-recession peak, “having stagnated in the last year or so.”