Yves here. As counterintuitive as it seems, reducing the “digital divide” may not be the plus its advocates assumed it was, if the UK experience is any guide. But the mechanism that the researchers assume reflects prejudices about the poor. I suspect readers can come up with other hypotheses that would be consistent with the results.

The internet is lauded for increasing access to information, but it is unclear whether this translates into a better-informed and more engaged voting populace. This column uses UK data to determine how the internet has changed voting patterns and aggregate policy choices. Internet penetration is found to be associated with a decrease in voter turnout, mainly among the lower socioeconomic demographic. Internet diffusion is also found to reduce local government expenditure, in particular on policies targeting less-educated voters. These findings point to a trade-off between the ‘digital divide’ and the ‘political divide’.

Successful democracy is underpinned by the ability of people to have their say; therefore, voter turnout is fundamental to sustaining the legitimacy of the democratic process. Voters’ information plays a key role in this process, helping to hold elected officials accountable to their electorate. The mass media is the primary source of information for voters, enabling them to monitor politicians and to use this information in their voting decisions. The internet has dramatically affected media markets, decreasing the costs of accessing information. At the same time, the internet has increased the availability of many forms of entertainment (such as movies, games, and social media), potentially inducing individuals to substitute away from news and from traditional media, thus crowding out their political engagement (Prior 2007). According to the Oxford Internet Survey (Dutton and Helsper 2009), over two-thirds of all British households have access to the internet, and 56% access it through broadband. Only 28% of those reported reading a newspaper online, however, and only 11% reported using the internet to look for information about an MP, local councillor, or politician.

Moreover, the extent of political participation affects aggregate policy choices. Large increases in suffrage provide, perhaps, the most interesting historical episodes – Lott (1999) examines the growth of US government spending as a result of women’s voting rights; and Lizzeri and Persico (2004) show that the extension of the voting franchise in 19th century Britain was associated with an increase in expenditures on local public goods.

The goal of our recent research (Gavazza et al 2015) is to empirically study the effects of internet diffusion on election outcomes, as well as on politicians’ policy choices. We exploit the dramatic growth of the internet in the UK through a rich dataset that reports the total number of local broadband subscribers in each node of BT’s local distribution network, matched with outcomes of local elections and with local governments’ policy choices (i.e. expenditures and taxation).  Access to the internet is often heterogeneous across individuals, and this variation is well-suited to studying the effects of the new media on electoral politics and government policy. Moreover, local government elections and policies provide an ideal laboratory to analyse these questions, since they usually exhibit greater variations than national ones, which depend on more-general issues (e.g. civil rights, security, or immigration). Finally, the circulation of local newspapers – the traditional source of information about local politics and local government – dramatically declined in the last decade as the internet spread, with potentially large effects on local elections.

Our analysis proceeds in two main steps. In the first step, we delve into the effect of internet penetration on electoral participation by merging our rich database on internet penetration to data on local election outcomes in each one of the 7,700 electoral wards in England over the period 2005-2010. Interestingly, evidence from the introduction of older, then-new media in the US shows remarkably different effects – Stromberg (2004) documents that radio increased political participation, whereas Gentzkow (2006) shows that the introduction of television decreased it. What about the internet?

To overcome this challenge, we exploit ‘random’ access to broadband internet across different geographic areas and over time due to weather shocks. Specifically, several regulatory and industry reports document that the weather affects the costs of providing reliable broadband.  Hence, we obtained monthly rainfall data from the UK Met Office, which we employ as the supply-side instrument that affects penetration across locations and over time through internet service providers’ costs. It is, arguably, uncorrelated with demand-side unobservables.

Figure 1 provides an example – it displays maps of two local authorities, one urban (Birmingham; top panels) and one rural (Sefton; bottom panels). In each panel, we also report the wards that belong to each local authority. The left panels display rainfall levels and the right panels display internet diffusion across electoral wards within the Local authorities. These maps provide simple graphical evidence of the variation in rainfall that is typical of the full sample; they also seem to suggest that a negative correlation between rainfall and internet diffusion persist across wards within these local authorities. While the maps only provide evidence of cross-section variations, we also exploit changes over time in the analysis. 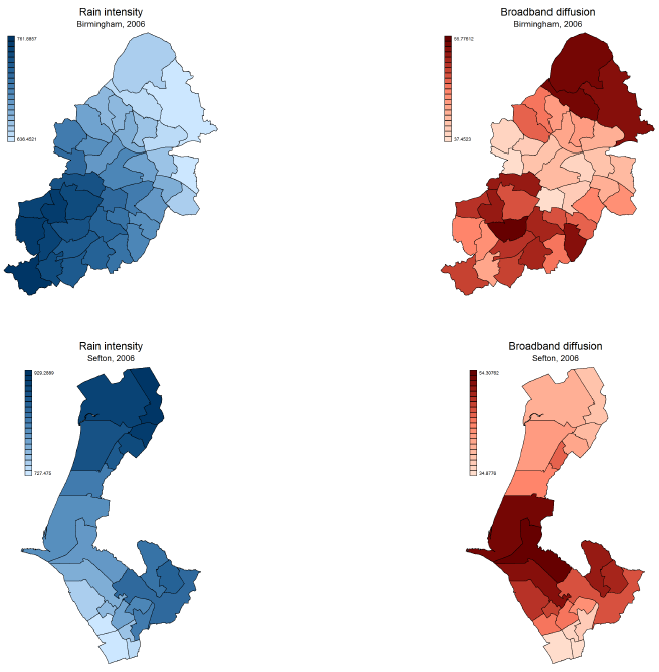 Note: Rainfall (left panels) and broadband diffusion (right panels) across wards within the Local Authorities of Birmingham (top panels) and Sefton (bottom panels) in 2006. The black lines identify the boundaries of electoral wards.

Using this identification strategy, we find that a 10% increase in household internet penetration decreases voter turnout by 2.9%. This negative effect comes mostly from the lack of political participation among the lower socio-economic demographic – more-educated people still turn up to vote, whereas the political engagement of the less-advantaged people drops the most as they gain access to the internet. Moreover, we validate our identification strategy through several falsification tests that use data from local elections held before the diffusion of broadband, finding no effect (precisely estimated) on voter turnout in these pre-internet elections.

The findings of our first step complement the recent contributions of Falck et al (2014), who find that internet availability has had a negative effect on voter turnout in Germany; and of Campante et al (2013), who find that broadband had an initial negative effect on turnout in Italian national elections, but, over time, has fostered other forms of online and offline participation. However, the fundamental question in democracy is whether these changes in participation (due to the internet) have any effect on government policies. This is exactly the goal of the second step of our analysis, and the key contribution of our research.

To do so, we collect data on local authorities’ public finance choices (expenditures and taxation), and merge them with our internet penetration data, now aggregated at the level of each local authority. We find that a 10% increase in internet penetration decreases local government expenditures and property taxes by approximately 6% and 7.5%, respectively. Moreover, we find that expenditures that target less-educated voters (whose participation declines the most), such as expenditures on social housing and social services, decrease the most, whereas expenditures that target more-educated individuals (whose participation declines the least), such as expenditures on education, decrease the least.

Our findings corroborate the idea that internet availability has displaced more traditional media with a richer political content (i.e. newspapers). Moreover, they indicate that more-educated individuals tend to use the internet to get information and vote, while less-educated individuals tend to use if more for entertainment – they become less politically involved, and vote less. As a response to these differential effects, more-educated individuals become more influential in the democratic process, thus slanting policy choices more in their favour. The magnitudes of our results are sizable and, thus, our paper complements other recent contributions that find large effects of the media on politics (Martin and Yurukoglu 2014, Prat 2014).

In our view, these results give rise to at least two observations.

The first is that several countries have enacted policies to decrease the ‘digital divide’ by subsidising the supply of and/or demand for internet broadband, with the goal of decreasing economic and social inequality between different demographic groups.

The second observation is that many countries have recently increased the devolution of powers towards local governments.

This raises questions about the accountability of these decentralised governments.