Yves here. I don’t want readers to think we’ve gone all soft, but it is worth pointing out that investor cash holdings are at an unusually high level and that in recent history has been a good indicator of market bottoms.

However, there are reasons to wonder whether the past will be a predictor of the future.

First, more and more trading is algo-driven. That creates the potential for both downdrafts and rallies to move faster, and more important, further than they would have in the past. In other words, the market structure is not the same as in 2008.

Second, the 2008 crisis came after three previous crisis phases, each of which the authorities beat back, albeit with more effort each time. And in the September-October debacle, the credit markets had seized up, the payment system was at risk, and the authorities were in all-hands-on-deck mode to prevent firms from collapsing and do what they could to calm badly-rattled nerves. This time, probably because the credit and payment systems are not the focus of the upheaval, The Powers That Be have largely sat pat. The lack of intervention (and political obstacles in the US to dropping rates through zero, not that we would advocate that course of action) means the markets may move on a different path.

Third, in deflation, what you want to hold is cash and cash equivalents and high quality bonds. Period. So if the central banks continue to fail to arrest the fall of inflation into deflation territory, fund managers are unintentionally winding up where they ought to be. The wee problem, of course, is that these institutional investors are presumably being paid to do something else, like invest in stocks or bonds of a certain flavor, so one has to wonder when holding unduly high cash balances, which may prove to be a winner from their client’s perspective, gets them punished for style drift (as in not adhering to the investment strategy you said you’d follow).

And if we really are going into deflation, there is another possible development in the wings: the end customers will figure out that they should hold only cash, cash equivalents, and high quality bonds, and will flee funds that do anything else, leading to a considerable thinning of the investment management sector. On the one hand, we’ve long said the financial services industry is hypertrophied and needs to shrink, and more and more economists, and even the IMF, have endorsed the idea that the financial services industry of the size of America’s is a drag on growth. But transitioning to a better-balanced has transition costs, and finding a next act for once-highly-paid and narrowly-skilled professionals may prove to be one.

Is the bottom in? One of the greatest contrarian indicators during bear markets is when the “professionals” move to cash, and the latest Global Fund Managers Survey has current cash levels at their highest since the 2008 top: 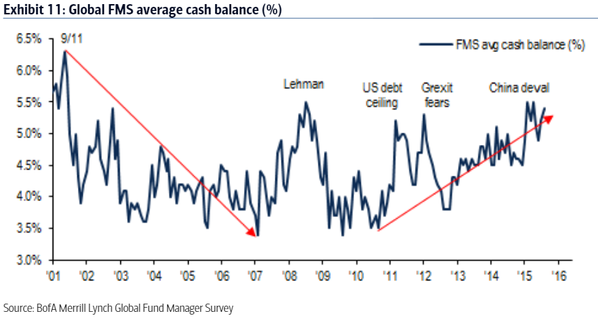