Yves here. There is something to be said for how straightforward open kleptocracies are…

At the very beginning of his presidency, in March 2000, Vladimir Putin said the state – he meant himself – should be “equidistant” from the oligarchs. He also promised “compliance with [market] rules, without offering any advantages or privileges or preferences to anyone”. The president, Putin added, “should stand above this influence and not pile up all the interests only in favor of the big companies and monopolies. We should not allow this.”

To illustrate what he now means by equidistance, the president annually invites forty oligarchs to the Kremlin, where he seats them clockwise in alphabetical order .

This year, in brief introductory remarks to his guests, Putin mentioned that capital has been cut off from outside Russia. He also noted the fall of revenue from the declining oil price. “Despite the complicated market conditions and objective difficulties, you were able to ensure your companies’ steady operation and preserved your workforce. We have carefully analysed what is happening at specific enterprises, and we can see that even where there are temporary difficulties, you have done everything to keep the staff on, even if it meant reducing their working hours. In general, I believe this is absolutely the right approach: it is vital to treat people with great care, particularly highly qualified personnel.”

There was no mention of capital controls to restrict the oligarchs from exporting their dividends and capital, nor of the deoffshorization programme requiring them to return their capital and reinvest it in Russia. For the start-to-finish history of that programme, read this. A year ago, Putin mentioned his offer of amnesty for capital returned to Russia; last week he ignored it. “Our response to external limitations,” Putin told the oligarchs, “is greater entrepreneurial freedom and the protection of property and rights of all those who are working and conducting their business honestly.”

At the December 19, 2014, supper there were 45 names to Putin’s left and right, of which four were officials. Here they all were. A video clip prepared by the Kremlin cameraman recorded the event this way.

This year, on December 24, the Kremlin press office has provided this guest-list of 46 names. Omitted from the guest-list are the officials: chief of the presidential staff Sergei Ivanov, Kremlin economic advisor Andrei Belousov, Deputy Prime Minister Igor Shuvalov, and Central Bank Governor Elvira Nabiullina; they can be glimpsed to Putin’s right and left, in this video-clip. They were also present a year ago.

Zyuzin, who has hung on to shareholding control of the steelmaker and coal group Mechel, while fighting off state bank demands to relinquish his shares in exchange for a state bailout from bankruptcy, made a show of pencilling down Putin’s every word. The only other oligarch at Putin’s table to do that was Vladimir Yevtushenkov, owner of the Sistema group. Last year, his clash with Igor Sechin over who owned the Bashneft oil company, put him under house arrest for three months. He was released in time to appear at the president’s soiree. 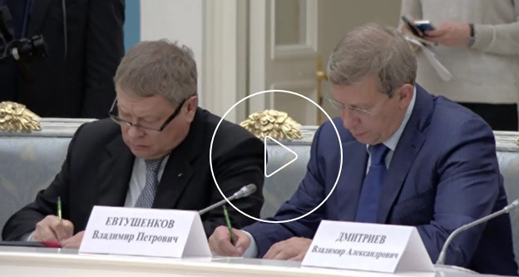 Missing from both the 2014 and 2015 guest lists are three names identified on US and European Union sanctions lists as oligarch-sized businessmen whom the US Treasury believes to be personally close to Putin — the Rotenberg brothers, Arkady and Boris; and St. Petersburg banker Yury Kovalchuk (below, left).

The fourth “crony” to be targeted by sanctions and to be seated two years in a row is Gennady Timchenko (above, right). For the current sanctions list, click.

The name of the richest of the oligarchs who is missing from both occasions is Mikhail Fridman of the Alfa group and Vimpelcom.

At the conclusion of Putin’s opening remarks the press were obliged to file out. As they did, according to one of the trusted pool reporters, he heard Putin say something that isn’t on the official tape. Putin described the oligarchs around the table as “Почти семейным.” “Almost family.”