Ringling Bros. Circus Elephants To Retire By May 2016 NationofChange (furzy)

Kangaroo in ‘grieving’ photos may have killed while trying to mate, scientist says Guardian (DR. Kevin)

Need Surgery, Will Travel New Republic (resilc). I know people who go to Eastern Europe for serious dental work. You get German materials, which if anything are better than we use here, and you can find dentists and oral surgeons every bit as good if you know where to go.

To Better Cope With Stress, Listen to Your Body New York Times (David L). Junk science alert! A reader challenge to identify some of the reasons why.

Stocks Take a Beating as Alarm Grows Wall Street Journal. That was the story as of yesterday’s close in the US. This is the pre-opening update: Stocks Resume Slide on Oil Concerns

Poland is backsliding on democracy, and the EU is powerless to stop it Slate

Iraq and the Kurds Are Going Broke New York Times

Clinton attacks produce windfall of campaign cash for Sanders Washington Post. So if you REALLY want to poke a stick in Hillary’s eye, do so now by giving to Bernie! This is a way to punish her for telling lies, when in the past telling lies has been hugely profitable for her and Bill.

Why Is Hillary Clinton’s Polling Slipping? Atlantic (resilc)/ Great title but the rest of the article undercuts it, trying to say that either the polls are wrong or the Bernie bump is temporary.

Al Jazeera America to shut down in April CNN

Antidote du jour. Zane: “Wednesday afternoon at our basement window in Rochester, Minnesota, about 17 blocks from the Mayo Clinic. The tomcat’s name is Peaches. The deer did not share her name.” 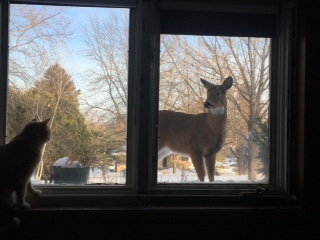