It’s a mystery why CalPERS keeps putting its hand in the buzzsaw by continuing to present misleading or outright false information, now that the trade and even the mainstream press is becoming more savvy about private equity.

The latest example is the content of and the messaging surrounding the publication of CalPERS’ most recent Comprehensive Annual Financial Report, or CAFR, as they are called in the public pension fund world, for the year ended June 30, 2015. CalPERS doubled down on its incomplete and therefore inaccurate reporting of private equity fees and costs.

We’ll start with the big items and then dip into some details. Let’s start with the headline from Private Equity International, CalPERS paid $414m in fees to PE funds in 2014. As we will discuss post haste, this headline is utterly false. CalPERS’ fees to PE were more on the order of $2 billion, making this a massive understatement, approximately $1.6 billion, or 80%. And that headline was not the result of helpful cherry-picking by a private-equity-friendly trade publication; it faithfully picked up CalPERS’ messaging. From the article:

“The California Public Employees’ Retirement System released its annual comprehensive investment report, which indicated that of the total $414.1m paid to fund managers in 2014, the largest portion of it went to a managed account with Apollo.

This is down 6 percent from $439.7 million it paid the previous year.

CalPERS spokesman Joe DeAnda told Private Equity International that the fees include “everything besides carried interest” and consist of “mostly management fees.” The fees and costs were paid in relation to CalPERS’s Public Employees’ Retirement Fund (PERF).

In November CalPERS released carried interest data for the first time, showing a total $3.4 billion shared in profits with managers advising funds for the pension system, as PEI reported.

First, it is absolutely false to say that fees include “everything besides carried interest”. This total does NOT include all the management fees, which is the 2% annual charge in the protoyptical “2 and 20” private equity fee schedule (the “20” is the 20% carry fee, which is 20% of the profits after a hurdle rate, usually 8%, has been met).* It includes only management fees paid in cash, and excludes the large portion of management fees shifted onto portfolio companies via management fee offsets.

Private equity general partners charge numerous fees to the companies they have purchased with a fund’s money. As limited partners started objecting to how large these fees were getting, rather than simply saying, “Cut it out,” they agreed to the peculiar and non-transparent ruse of having the general partner rebate (“offset”) a percentage of these fees, which in recent years has averaged 85% across outstanding private equity investments, against the management fees, which are paid quarterly.

Whether a dollar is paid directly by the investors via funds they wire to the general partners, or indirectly by being shifted onto the companies they have purchased, the money still comes from the limited partners. Industry standard-setter and CalPERS’ own consulting firm, CEM Benchmarking, underscores this reality. From a seminal 2015 report, The Time Has Come for Standardized Total Cost Disclosure for Private Equity:

CalPERS’ continuing to report only the net management fee is the sort of intellectual dishonesty we’ve called out in other aspects of how investors like to look at private equity: too many prefer accounting fictions to economic realities even though they know better.

Second, excluding the carry fees, which CalPERS did not include in the CAFR even though it had the data as of July last year, is like an obese man saying, “I only weigh 195 if you exclude both of my legs.” The cost of the “carry fee” most assuredly is part of the total costs. Levitin again: “Smaller management fees could be offset by larger carry costs.”

I am surprised that CalPERS is continuing to provide a false number for the fees they pay. By now GPs are saying that they give the detailed portfolio company fees to their LPs and CalPERS said they now had the system in place to track carried interest – hopefully both realized and unrealized one.

But they keep on pretending nothing had changed. Yes, $400 million is a high number in absolute term but it is pointless because we do not know how much rebate there has been etc. It is almost laughable that they are comfortable writing $400 million in their (ironically?) titled comprehensive annual report. It would mean that private equity managers make just as much as mutual fund managers (relative to NAVs). It does not add up. If I had to make a guess as to the true fee paid to PE by Calpers, it would be about $2 billion a year. And if I am right (my previous back of the envelop calculations on fees at CalPERS turned out to be), then I hope that CalPERS received a big thank you card for Xmas.

Phalippou has regularly used 7% as his estimate of the total annual cost of investing in private equity. CalPERS concurred with that in its private equity workshop in November of last year: 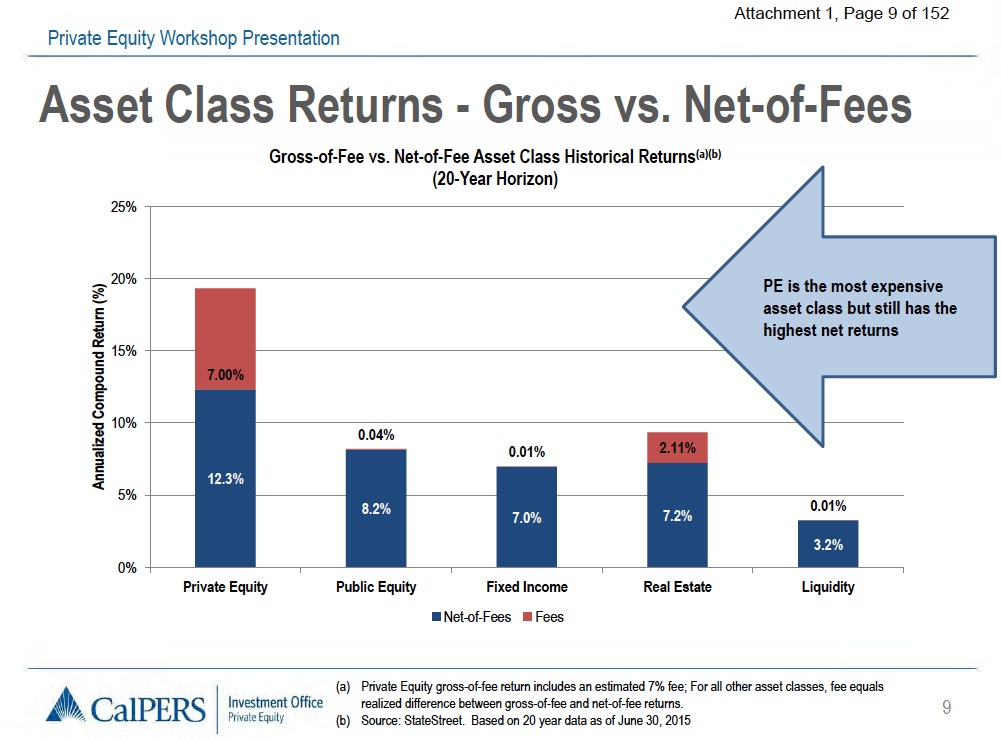 Mind you, at this point, CalPERS had the carry fee data for the entire history of its investment in private equity, so if that data suggested that Phalippou’s rough and ready number was too high, you can be sure staff would have used a lower figure.

CalPERS’ CAFR for 2014 shows the total value of its private equity investments as $31.5 billion as of June 30, 2014. The latest CAFR puts the total value at June 30, 2015 at $28.8 billion. So to get an approximate average assets under management, let’s average the year end figures, which gives us $30.2 billion. Multiply that by 7% and you get $2.1 billion, or a nearly $1.7 billion understatement of the likely level.

Key Details of the CAFR Are Also Misleading

Eileen Appelbaum, the co-author of Private Equity at Work, is disturbed by CalPERS’ continuing sleight of hand:

Two astounding things jump out from the CalPERS investment report. After all the brouhaha over CalPERS’ 25-year failure to report performance fees paid to private equity, the $414.1 million in fees and costs just reported by the pension fund does not include these fees. And CalPERS continues to pat itself on the back because its PE investments beat its own stock portfolio. What taxpayers and retirees want to know is, did these risky investments beat CalPERS chosen stock market index and did they do so by the 3% necessary to compensate for the risk?

CalPERS’ staff lost its attempt to have the board replace the long-standing strategic objective of “maximizing risk-adjusted returns” with “enhancing the pension fund’s performance.” The change was voted down at the last board meeting in December, but the staff seems not to have noticed.

Mind you, not only did CalPERS not include the carry fee information in its cheery report to the press about private equity’s costs, it did not include it in the CAFR, even though it obviously had it at the time and could easily have incorporated it.**

And as far as Appelbuam’s consternation that CalPERS’ staff is still trying to snooker the public about the attractiveness of private equity returns by omitting its failure to meet the required risk premium, it was not just the board that nixed staff’s effort to pretend that the extra risks of private equity should be airbrushed away. So did CalPERS’ own consultant, Andrew Junkin of Wilshire Consulting.

And to drive her point home, page 101 shows PE underperforming its benchmark by exactly 300 basis points over the longest time frame shown, ten years. That means CalPERS earned the same amount from private equity that it would have had it invested in the relevant stock indexes instead, and would have come out ahead by reducing risk, since public stocks are more liquid and less leveraged than private equity. Failing to beat stocks means CalPERS would have been undeniably ahead over the last decade on a risk/return basis had it merely sought to replicate its private equity benchmark.***

What is particularly distressing about CalPERS efforts to stick its head, and that of the public, in the sand about the total costs of investing in private equity is that this is a clear breach of fiduciary duty. There is plenty of case law that says that a fiduciary must assess the reasonableness of costs in making investments. Because CalPERS staff refuses to provide the total management fees to its board, along with the carry fee and other expenses,**** the board remains in the dark about the cost of private equity even though they have an obligation to CalPERS’ beneficiaries and ultimately California taxpayers to know and evaluate this figure. This is yet another example of how the passivity of CalPERS’ board is tantamount to a dereliction of duty.

___
* As regular readers know by now, it’s more complicated than that. The fee is lower for big funds, and also steps down after the investment period, typically five years in. However, the flip side is the management fee is calculated on the committed amount, not the amount of money actually put to work. That means in the early years, the effective fee level, as Oxford professor Ludovic Phalippou has pointed out, is an average of 4% of the funds deployed.

** There appears to be only very marginal improvements in reporting of private equity fees and costs. The 2014 CAFR included a schedule that described as showing performance fees on “all funds”. That was misleading because it did not include private equity. In the 2015 CAFR, “all funds” disappeared from that title. The description is now less misleading, although the performance fee data is still just as incomplete.

*** CalPERS keeps trying to divert public attention from this sorry fact by harping that private equity outperformed CaLPERS’ other investments, including “global equity.” CalPERS’ “global equity” results have been poor, due to the fact that (among other reasons) CalPERS made a huge bet on foreign stocks, which are roughly 50% of that portfolio, which has not worked out well in this strong dollar environment. CalPERS’ bad luck or incompetence in public equity (take your pick) is no justification for pretending that private equity performance is better than it was.

**** Let us also not forget that expenses are also charged to portfolio companies, including ones that may not add up to a big percentage in the total scheme of things but are hard to justify, like the lavish use of private jets, including, sometimes explicitly, for family members of top partners as well as fund professionals.