Yves here. There are so many fracture points in the financial system that are now under stress that it is hard to keep on top of them all. One has been Italian banks. In 2011, Unicredit, which ironically is the successor by acquisition to Creditanstalt, the Austrian banks whose failure in 1931 triggered the slide into the Great Depression nadir of 1932-1933, was rated the second worst bank in the awfully permissive European stress tests. It had gone on a buying spree, picking up often-weak institutions at elevated pre-crisis prices. Even after multiple capital raisings and years of clean-ups, UniCredit now has non-performing loans that stand at 20% of its loan and receivables book.

From a Financial Times article earlier this month:

“The banking sector is a crucial problem of Italy,” says Luigi Zingales, professor of entrepreneurship and finance at the University of Chicago Booth School of Business. “When there is low tide you see who is swimming naked. And we have a low tide and all the problems are coming to the surface.”

By Silvia Merler, an Affiliate Fellow at Bruegel whose specialties include international macro and financial economics, central banking and EU institutions and policy making. Previously, she worked as Economic Analyst in DG Economic and Financial Affairs of the European Commission (ECFIN). Originally published at Bruegel

Italian banks have recently come under market pressure, as investors seemed to have grown worried about the sector. This triggered a speed-up in the discussion between the Italian government and the European Commission about the creation of a “bad-bank”, on which a decision is reportedly due this week.

Taking a step back, it is important to understand what could be behind the sudden change in market sentiment. Borrowing a literary expression, this is to some extent the chronicle of a death foretold. Italian banks have been very resilient to the first wave of financial crisis in 2008, due to the low exposure of Italian banks to US products and to the fact that there was no housing bubble that burst (contrary to what happened e.g. in Spain). But when the financial crisis turned into a euro sovereign banking crisis, things started to deteriorate for Italian banks, and they have really never improved much since then. 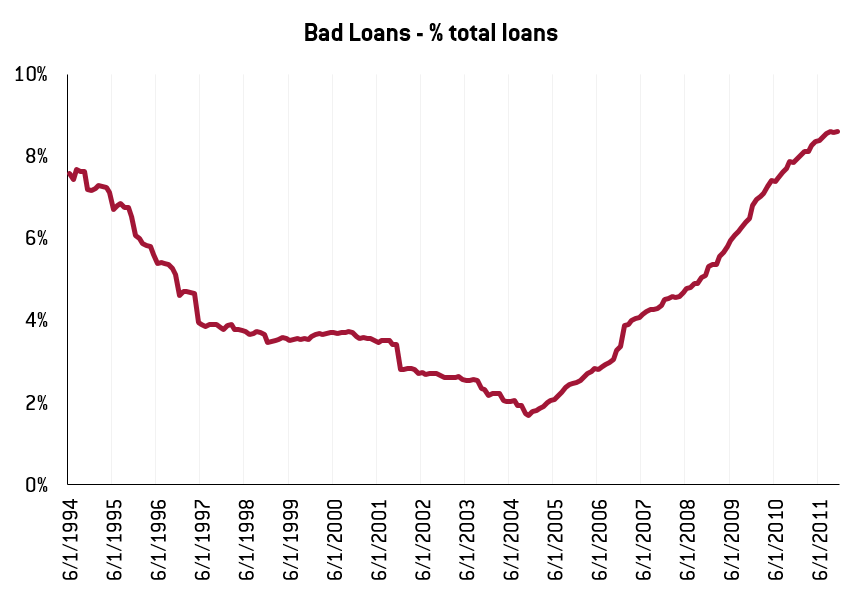 As the economic situation worsened, bad loans accumulated on banks’ balance sheet, making it increasingly difficult for them to lend to the private sector and support the economic recovery. Bad loans have been growing constantly ever since 2008, and reached 200bn euro in September 2015. This is roughly equivalent to 9% of total loans, a level that was unseen since the late Nineties. About 71% of the total bad debts is made of loans to non-financial corporations, whereas 27% is constituted by loans to households, and the ratios are higher in the Southern and Islands regions – where the economic situation is worse – than in the North (see Table 1). At the bank level, the situation is mixed (Table 2). Non-performing Loans ratios range from about 14% for Unicredit to as much as 39.9% for Monte dei Paschi and coverage ratios also vary considerably across the individual institutions.

The existence of sizable and increasing bad loans in the Italian banking sector has been known for quite a long time (see e.g. here and here). What acted on market sentiment is probably a worry about how this could play out in the future, given that the new regime for bank recovery and resolution (the BRRD) has now entered into force.

The recent episodes of “creative” resolutions of four Italian banks have in fact highlighted a potentially very serious problem, i.e. that over the past years some Italian banks had been placing their subordinated debt with retail customers who were unaware of the true risk associated with these products.

Figure 2 shows that as of September 2015, Italian households were holding about 30% of the total bonds issued by Italian banks, slightly less than the 35% that was held by other Italian banks. The households’ share of total bank bonds used to be much higher (around 60%) until the mid-2000s. It declined to about 45% between 2005 and 2007, mostly substituted by increased foreign holdings, and it started to to decrease again in 2011, substituted this time by increased holdings of other Italian banks. 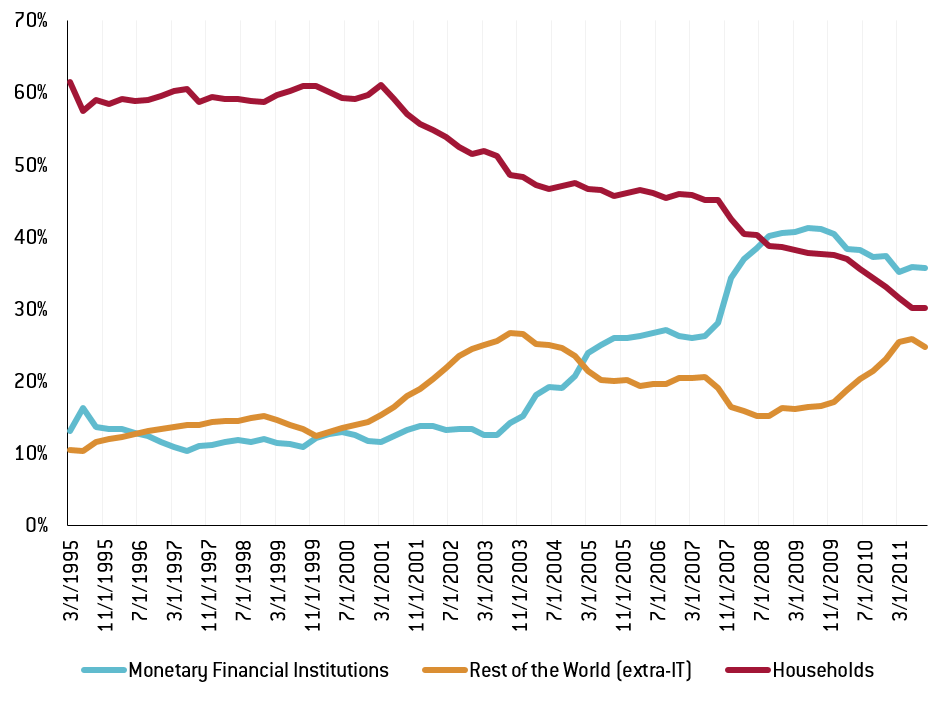 The entry into force of the BRRD makes this a thorn in the side of the Italian government. BRRD aims at reducing the cost of bank rescues for taxpayers, which  would be especially problematic for states – like Italy – that have high public debt. But in order to do so, BRRD requires sizable bail-in of bondholders, which in the case of Italy can likely retail holders with limited awareness of the risk. The potential for political backlash is obviously large, and “creative” solutions like those implemented this fall to protect senior bondholders will hardly be possible under BRRD. Even if they were possible, it would be very difficult to engineer them, because of their cost. The operation that was carried out to resolve four banks in November without haircutting senior bondholders required the three biggest Italian banks to advance the money that were not in the resolution fund. And these were only 4 very tiny banks, making up for around 1% of Italian deposits in total.

These worries, and the resulting market stress, speeded up the talks between the Italian government and the European Commission about the creation of a bad bank. This could be a potentially important step to finally clean the Italian banks balance sheet, but it is probably not going to be miraculous and it is certainly not going to be as easy as it would have been in the past. According to Reuters, the plan that is being discussed aims at reducing the balance sheet impact of the necessary writedown by having the bad loans sold to special vehicles, which would issue bonds to fund the purchase. To make the bonds appealing and cheaper to issue, Italy would offer a state guarantee on them, with the underlying idea that the easier it is for the SPV to finance the purchase and the better the terms on which it can buy the loans from the banks, thus limiting the balance sheet impact.

But the implementation of this public-private scheme could be much more difficult today under the new regulatory framework than it was at the time when Spain and Ireland cleaned up their banking sectors. The point of contention is the the price at which the banks will be able to offload their bad loans to the vehicle. If this price is too low, than the writedown could have a sizable impact on banks’ balance sheet and it would not reassure the markets. Reuters reports that the selling price of the bad loans to the SPV could be between 20 and 30 percent. If we pick the average (25 percent), a very simple back of the envelope calculation suggest the existence of additional provision needs for the sector (see table 2). On the other hand, if the government guarantee were such that the selling price resulted too high compared to the market value of the loans, then the operation would be considered state aid. Last year, just after the release of the ECB stress test results, I wrote about some long-term structural issues – such as the low profitability of the Italian sector compared to e.g. the Spanish one, or the complex and opaque governance system. While having been know for a long time, these problem were at that time lying quietly below the surface waiting for their moment of recognition.

The final wake up call might have finally come on the 1st January 2016, when the Bank Recovery and Resolution Directive (BRRD) officially entered into force. Based on the management of recent resolution episodes, investors have probably realised that the Italian government will have troubles managing a change that could have potentially relevant social consequences of which the country had little awareness until a couple of months ago. Facing the long-lived issues in the Italian banking sector is now urgent, but Italy might have waited too long for it not to be painful.