India’s red tape causes trouble for exporting cats Financial Times. Try bringing a pet to Australia. The Aussies can out-do any other Commonwealth bureaucrats on those rare occasions when they put their minds to it. Ditto when I tried bringing my garden variety dietary supplements in when the Olympics were on.

These 25 Companies Are More Powerful Than Many Countries Foreign Policy (resilc). Amazon is ranked higher than Google, now Alphabet? Ditto Nestle? I think readers will have a party with this list…

Is Britain better off outside the EU? Financial Times

Could Brexit lead to an end to austerity? BBC

One million and counting: EU migrant deal has little effect on Greece euronews

Last Chance, Amigo? You Can Never Be Too Late in Havana Der Spiegel. Glenn F: “This article by a former East German is very interesting and provides a perspective on Cuba not available through the MSM.”

By rejecting $1bn for a pipeline, a First Nation has put Trudeau’s climate plan on trial Guaridan (Glenn F)

Obama has risked US credibility in Middle East Financial Times. Very hawkish subtext. Is this becoming the new conventional wisdom?

FBI may not need Apple to unlock San Bernardino shooter’s iPhone Washington Post (furzy). Timing awfully convenient, when the Feds were at risk of a loss in court, Apple’s products have so much support that it isn’t being dented by the government’s criticism, and the actual data is unlikely to be worth anything.

U.S. Says It May Not Need Apple’s Help to Unlock iPhone New York Times. Bill B:

It’s highly likely the NSA already has a bypass mechanism. This kind of tech filters down into the underworld because government spies like to outsource work to criminal freelancers. Helps to enable plausible deniability.

Hillary Clinton Lays Out Her Own Middle East Approach — And It’s Not Obama’s Huffington Post. Hillary kisses the AIPAC ring. And then some.

If Hillary Isn’t Indicted, the Rule of Law and the Republic Are Dead Of Two Minds (Chuck L). I think we passed that event horizon a while ago.

Trump questions need for NATO, outlines non-interventionist foreign policy Washington Post (resilc, furzy). Even with doubts about whether Trump really means it, heads will be exploding. Also lists who his advisors are.

Mitt Romney Stabs John Kasich in the Back Vanity Fair

The Republican Party is old and getting older. That’s a huge problem for the GOP. Slate (resilc)

It’s Hard to Find America Inside of Pulitzer Bait Gawker

The Current Oil Price Rally Is Reaching Its Limits OilPrice

Americans think they work harder than everyone else — and they don’t Quartz (resilc). Ahem. 1. Americans do work longer hours than people in just about any advanced economy due to sucky vacations (and that’s before you get into “always on duty” demands of a lot of employers). 2. Whether all that work is useful is a the responsibility of management. The fact that a lot of work is a waste of time (meetings!!!!) does not make work any less hard. 3. Having said that, American love to brag how hard they work and then believe their PR.

Let the Can Collectors Collect Cans, For Chrissake Gawker

New Rules for the Monetary Game Reghuram Rajan, Project Syndicate. Today’s must read. Rajan was the economist who earned the ire of just about everyone at Greenspan’s last Jackson Hole by delivering his paper, “Has Financial Development Made the World Riskier?” which concluded “Yes”. This article is (as required of someone at his level) coded, but it’s not hard to discern that he is leveling serious criticisms. 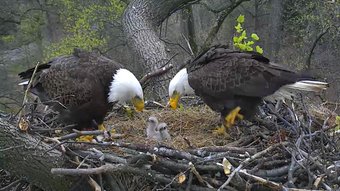 Video and related story via Reuters. Look how the eagles, who are awkward moving around in the nest, are so careful around their chicks.