Across the developed world the persistence of a phenomenon that was initially seen as a freak occurrence—negative interest rates—is now a cause for concern. One form the tendency takes is for central banks to set their policy rates, which signal their monetary stance, below zero. The process was triggered by the European Central Bank (ECB). Under pressure to forestall deflation in the region, the ECB reduced its deposit rate to (minus) 0.1 per cent in June 2014. Since then, according to the Bank for International Settlements (BIS), till January 2016 four national central banks, from Denmark, Sweden, Switzerland and Japan, have moved the interest ‘paid’ on part of their deposits with them to negative territory.

After the Great Recession began in late 2008, there was a widespread trend observed for policy rates to be cut to stall and reverse the economic downturn. This process has now gone so far in some countries, that rates have breached the zero-barrier. The ECB itself has in three steps cut its deposit rate to (minus) 0.2, (minus) 0.3 and (minus) 0.4 in September 2014, December 2015 and March 2016 respectively (Chart 1). 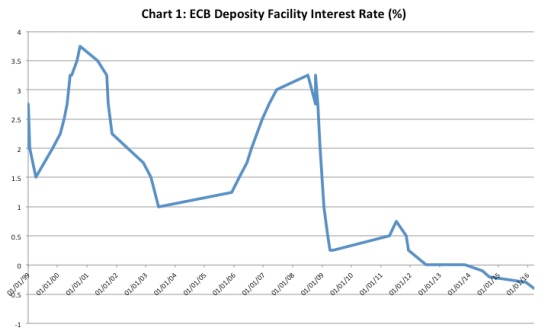 Underlying this trend is a much more pro-active role for monetary policy in countering deflationary trends. Thus, in March 2016 the ECB reduced the interest it pays on deposits (or further lowered the negative rate from -0.3 to -0.4 per cent). In addition, it offered zero interest loans to banks, with the promise that if they use that money to lend 2.5 per cent or more than they were previously doing, then the ECB would pay them the equivalent of 0.4 per cent of what they borrowed from it as interest. In sum, the central bank is promising to pay banks that borrow from it, as long as they increase their lending to households and firms.

The motivation for negative deposit rates is clearly to pressure or persuade banks to lend rather than hold on to reserves with the central bank. This is not the first time that central banks have opted for such a policy (the Swedish Riks bank had flirted with it in 2009-10). But this time around, the tendency is spreading fast, with more countries contemplating action along these lines. In fact, even Janet Yellen told a Congressional hearing that the US Fed would consider this option if it found it to be necessary. That is not surprising, given the fact that the Fed has relied on the interest rate instrument, which peaked after the oil crisis in the 1970s and has been on the decline since with the fall being sharp with the onset of the 2008 crisis (Chart 2). 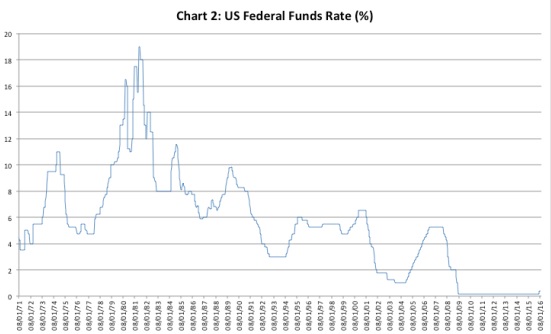 This growing popularity of a measure that was very rarely experimented with in the past can be attributed to two sources. First, governments have succumbed to the pressure not to use debt-financed fiscal spending as a means of stimulating recovery. This makes monetary policy measures, such as liquidity infusion and interest rate reduction, the principal instruments to combat recession and spur recovery. Second, the movement of rates to negative territory reflects the desperation that has overcome governments, as they find that deep rate cuts have not had the desired effects of stalling the downturn and ensuring recovery.

This has affected bond markets as well. Responding to the negative policy rates set by the central banks, investors have been pouring money into safe assets such as domestic and foreign government bonds that offer positive rates, leading to large increases in bond prices. Since bond yields fall as their prices rise, bond yields in countries like Japan and Germany (Chart 3) entered negative territory, with investors paying the government for borrowing from them. According to Bloomberg, the volume of debt with sub-zero yields has crossed $7 trillion, which includes $4.5 trillion of Japanese government debt and $1.1 trillion of German bonds. 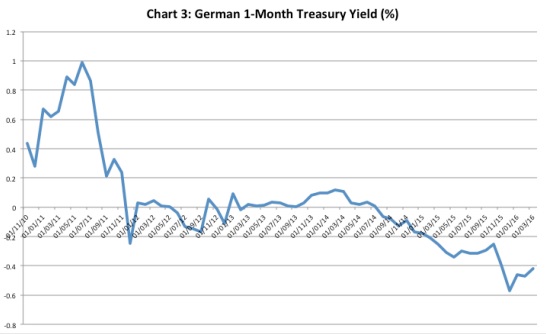 Thus negative rates are the consequence of policy makers betting on interest rate cuts to drive growth through multiple channels. To start with, they expect bank lending rates to come down and encourage households and firms to spend and/or invest more, thereby raising demand. Second, investors not wanting to pay governments for holding their money are expected to turn to asset markets like the stock market. That would raise financial asset prices and trigger the oft-cited “wealth effect”. With the value of paper or real assets rising, holders of those assets would be encouraged to spend more today rather than add further to accumulated wealth, spurring demand. Finally, since low and negative interest rates in a country would discourage foreign investors from investing in bonds and financial assets in the country concerned, the currency can depreciate, improving the competitiveness of exports.

The difficulty is that these expectations are not being realised. Households and firms are still burdened with debt, and so are wary about borrowing more, and banks are cautious of increasing their exposure to them even if pushed by the central bank. This could partly explain the thirst for government bonds, which has driven their yields to turn negative as well. On the other hand, with all countries relying on interest rate cuts, the effective depreciation of currencies, while significant vis-à-vis the dollar, is only marginal vis-à-vis one another. That neutralises the competitive benefits from depreciation relative to the dollar, with little chance of an export boom.

Parallel to these developments is concern about the effect that negative rates can have on financial markets. They could trigger a shift to stocks away from bonds and set off a speculative spiral in stock markets. Negative rates are likely to adversely affect bank profits as well. While banks need to pay depositors a reasonable rate to attract their savings into deposits, the low interest environment and pressure to lend require them to cut the rates they charge their borrowers. The result is a squeeze on margins. The effect this could have on financial markets is still uncertain. In short, there are grounds to believe that, while negative rates are the result of the ineffectiveness of interest rate reduction as a means to spur recovery, they can lead to financial instability.

In the current context the problem is not that the interest rate that was reduced during the slump was not raised during an ensuing boom. The problem is that large reductions in policy interest rates when they were in positive territory did not counter the slump. But since governments have forsaken completely the option of relying on the fiscal lever to manoeuvre a recovery, they have no choice but to continue reducing interest rates, which have finally entered negative territory. Unfortunately, that too seems unlikely to trigger growth in the foreseeable future. It is only increasing the prospects of another financial bust.

Originally published in the Business Line.