Private equity firms Apollo and TPG did such an effective and over-zealous job of asset stripping after loading up their 2008 acquisition, Caesars Entertainment, with over $18 billion of debt that they’ve been hauled into court by creditors who are charing the two firms with fraudulent conveyance. And yes, sports fans, the operative word is fraud. The underlying idea is that if a company is insolvent, yet the people in charge divert cash or other assets to themselves, they’ve stolen from creditors and need to give the money back. The British, by the way, have a simpler approach to this issue. If a company is “trading insolvent,” as in continuing to operate while broke, the directors are personally liable.

Cases based on arguing fraudulent comparatively rare; one of the largest in recent years that involved similar claims, namely fraudulent conveyance and breach of fiduciary duty, was by Mervyns against the consortium of private equity firms that bought it, which included Cerberus and Sun Capital, as well as other parties, was settled in 2012 $166 million. By contrast, a court-appointed examiner last month found that creditor claims against the Apollo and TPG in the Caesars deal are between $3.6 to $5.1 billion before including criminal and common law fraud claims. The report also stated that the Caasers subsidiary that held most of the company’s assets was insolvent mere months after the 2008 acquisition.

And by happenstance, CalPERS is an investor in the Caesars, which filed for bankruptcy in early 2015. Some Caesars employees visited a CalPERS board meeting in July 2013 meeting to describe how Apollo and TPG were ruining the company for fun and profit. A representative of the union Unite Here, which represented some of the casino workers, spoke first. Her account makes clear how private equity firms profit whether the deal works out or not:

As you may know, CalPERS is a limited partner in both Apollo Investment Fund VI, a buyout fund sponsored by Apollo Global Management and TPG Partners V, sponsored by TPG Capital. One of the largest buyouts for those funds was Caesars Entertainment, the largest casino company in the world. …For investors like CalPERS Caesars has been deeply disappointing. The market capitalization has lost two-thirds of its value since Apollo and TPG took over in 2008. Last month, Apollo CEO Leon Black acknowledged in Oregon that his film lost its discipline with Caesars by paying too high a price and leveraging too much. But Apollo and TPG recouped their own general partner investments early on. In Apollo’s case, it recovered its own commitment on day one through the transaction fees alone, and TPG recovered its GP investment by 2010. Between transaction and monitoring fees Apollo and TPG have drawn 345 million from Caesars as of the end of 2012. The general partner stands to collect another 150 in monitoring fees over the next five years. That’s on top of limited partner fees. The large transaction monitoring fees clearly create a misalignment of interests between Apollo and TPG as the general partners and limited partners, including CalPERS. While hundreds of millions of dollars have been drained out of Caesars through these fees, the casinos have experienced staffing reductions that negatively impact the guest experience as workers will describe…. We think both workers and limited partners, like CalPERS, would be best served by cash being re-invested in Caesars rather than pulled out as fees. We believe CalPERS should not commit to Apollo’s Fund VIII until TPG and Apollo cease collecting monitoring fees from Caesars.

The chairman of the Investment Committee, Henry Jones, gave a perfunctory “thank you” after all of the speakers on Caesars had made their remarks.

When the 1,787 page bankruptcy examiner’s report came out last month, a raft of news stories gave short and useful overviews. The Financial Times has done a deeper dive, with one report in the pink paper proper and another in FT Alphaville.

The story in the Financial Times focuses on how many of the advisors to Apollo and TPG. hired to provide a veneer of independence, instead took the path of most profit, which was to toady to the buyout firms. This is something we’ve commented on from time to time, the corruption of the legal profession, but seldom do you get to look behind the curtain and see the details. And even before more dirt emerged, this transaction was seen as extreme even by seasoned financiers. From the Financial Times:

Wheeling and dealing at Caesars since the leveraged buyout has raised eyebrows for years. “The Caesars case is a brilliant and unprecedented example of creative liability management that is testing the limits of the market,” says Sarah Gefter, senior analyst at Reorg Research.

Caesars went much further than standard capital market maneuvers, engaging in a series of complex sales of casinos and intellectual property as well as financings, allegedly to benefit its private equity owners Apollo Global and TPG to the detriment of creditors. These gambits included setting up an entirely new public company called Caesars Acquisition Corporation to buy several Caesars properties and the infamous release of a debt guarantee possibly enabled by a perhaps poorly-worded indenture.

Those transfers bothered creditors enough that they filed multiple lawsuits in 2014 and 2015 against various Caesars entities accusing the parent company, Caesars Entertainment Corporation (CEC) and its private equity owners of “looting” the subsidiary company where the assets and the debt were situated, Caesars Entertainment Operating Company (CEOC).

The big question underlying all the claims of fraudulent transfers and breaches of duty is whether CEOC, the subsidiary of CEC, was solvent, or not.

One bad actor is the New York firm Paul Weiss, which had a team from O’Melveny Meyers that had brought Apollo and the Caesars deal with them. The bankruptcy examiner noted that it would be hard to make a case against Paul Weiss for breach of fiduciary duty stick since they would have to “knowingly participate” in that breach. Yet Paul Weiss had information that pointed to insolvency yet didn’t act on it:

A section in the court examiner’s Caesars report is dedicated to the role of Paul, Weiss in most of the disputed transactions. Under corporate law, insolvency at the Caesars operating company should have led to the appointment of independent directors, lawyers and bankers to protect creditors…. It then repeatedly represented both the parent and subsidiary Caesars entities despite their diverging interests.

Even though the conflict was glaring, it’s widespread if not pervasive in high end law practice for law firms to ask for and get waivers from their clients. Why this is perceived as sound is beyond me.

The FT Alphaville report does a fine job of summarizing how the bankruptcy examiner evaluated the question of when Caesars became insolvent. This quote is from the report itself:

Central to these claims is the fact that throughout this period CEC and the Sponsors treated CEOC as if it was a solvent 100% owned subsidiary when the reality, confirmed in much of the contemporaneous analyses they themselves created, was very different…

Moreover, precisely because of CEOC’s very problematic financial condition, by sometime in late 2012 the Sponsors adopted and began to implement a strategy, which while providing some benefit to CEOC, was designed, among other things, to strengthen CEC’s and the Sponsors’ position in a potential restructuring negotiation with creditors and improve their position in the event of a CEC or CEOC bankruptcy.

Indeed, by the Fall of 2013, while hoping to avoid a CEOC bankruptcy, the Sponsors began planning for what would happen in the event of such a bankruptcy. 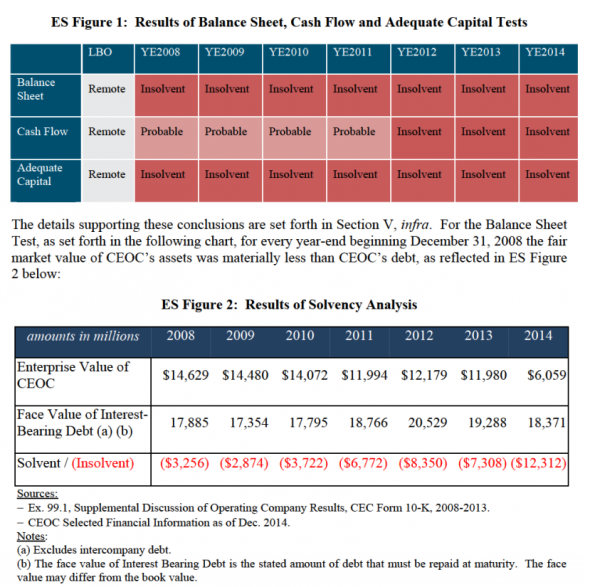 Apollo and TPG tried making the only defense they could, which was that this valuation was just the examiner’s opinion. They try arguing that they considered Caesars to be solvent because they had given it “financial runway” by lengthening debt maturities and that Caesars was still paying its creditors. The report stresses that this is not the legal definition of solvency, and that the board of the subsidiary can’t pretend not to know, since they were briefed in early 2009 on what the standards were and the mounting signs of insolvency.

The billionaire PE guys on the board each offered self-serving views on what defined insolvency (and plenty of evidence is cited showing they had, at least, contemplated insolvency at CEOC) but here we will share only this gem from the CEO of CEC, Gary Loveman, the marketing whiz with a PhD from MIT and a former Harvard Business School professor.

Gary Loveman, CEO and Chairman of the Board of CEC and CEOC, thought both that the issue was what alternatives were available to address the Company’s problem in the future while it met its current obligations, and that in calculating solvency you looked at the market value, not the face value, of the debt.

This was so laughable, that the examiner could not help but respond in a footnote.

If this was true, the worse the financial condition of a company, the less likely it would be insolvent since such a company’s debt would be trading at an ever increasing discount. Mr. Loveman was plainly wrong.

I wish I had time to read the report in full, since FT Alphaville stresses, “…just reading the lengths private equity firms will go to salvage bad investments is mind-blowing.” Well, but as we can see, “salvage” does not mean save the business, but maximize their take.

This is going to be quite the court drama. Stay tuned.