Yves here. This post is important because it is contrary to conventional wisdom, particularly the thinking of the Clinton campaign. 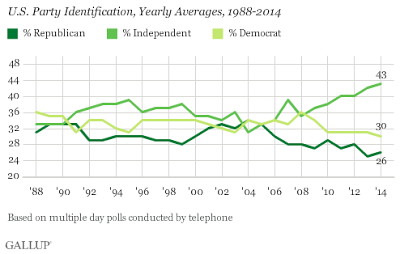 Party identification is way down. Neither party can win without winning independents (source; click to enlarge)

I want to start taking a look ahead, not in a long essay but in chunks. “Ahead” means what happens at the Democratic convention, what those outcomes may be, what happens in the general election, and furthest out of all, what happens in 2017 and beyond. So this will be a series of sorts.

I think the first main point is this:

1. Clinton, if she is the nominee, must win Sanders supporters or risk losing to the Republican, whoever that is.

Everything in this analysis flows from that. Look at the chart of poll results at the top. If you are among those who think that a presidential win can be crafted from party loyalists alone, I guess I’ll leave you to your thoughts and we can meet again in December and figure out who was right.

Naturally anything at all could be true in the future (Schrödinger’s future cat could be a dog), but some futures are more likely than others, and it seems clear just from the numbers that no one wins in November without winning independents.

More from that poll:

The recent rise in political independence has come at the expense of both parties, but more among Democrats than among Republicans. Over the last six years, Democratic identification has fallen from 36% — the highest in the last 25 years — to 30%. Meanwhile, Republican identification is down from 28% in 2008 to 26% last year….

The decline in identification with both parties in recent years comes as dissatisfaction with government has emerged as one of the most important problems facing the country, according to Americans….

The pollsters speculate on the reasons for this “dissatisfaction with government,” using language like “this is likely due to…” etc., most of which involve standard-issue conventional thinking — “what everyone knows to be true” because the media repeats it constantly. For example, “partisan gridlock” comes up as one of the guesses. (A much-repeated conventional explanation, but inaccurate — on matters that matter to the 1%, there is no gridlock, as any neutral observer can see, unless party rebels block a bipartisan move like cutting Social Security benefits.) The polling itself is accurate though and should not be dismissed.

For the Democrats especially this is a problem. Gallup again:

Although independents claim no outright allegiance to either major party, it is well-known that they are not necessarily neutral when it comes to politics. When pressed, most independents will say they lean to one of the two major parties. For example, last year an average of 17% of Americans who initially identified as independents subsequently said they “leaned” Republican, 15% were independents who leaned Democratic, with the remaining 11% not expressing a leaning to either party.

Though Democrats-plus-“Democratic-leaning” independents slightly outnumber their Republican-plus-Republican-leaning counterparts, it’s not by much. In addition, people are increasingly party-independent for reasons, and we don’t have to speculate what those reasons are. This is a campaign season with votes, not just polls; two candidates are making great inroads with “independents,” especially Bernie Sanders; and both of those candidates are promoting radical messages, not “radically moderate” messages.

Which leads to a corollary:

If you look at the swell of new voters in both parties, the increase is for the “change” candidate, not the one promising to retain and refresh the status-quo. The presidential candidate who wins this election will be the one who best appeals to the new “radical independent” — the voter, in other words, who agrees with the following, a quote included in a New Yorker piece by Ryan Lizza (my emphasis):

Sanders “is tapping into something that is very deep and very profound inside the Democratic Party, which is this discontent with the system that is no longer producing for everyday people,” Simon Rosenberg, a Hillary supporter and the head of NDN (formerly the New Democrat Network), a liberal think tank in Washington, told me. “He has characterized Hillary as a champion of that system and as somebody who is actually a leader of the system, while he is the one that wants to change it.” Rosenberg added, “He’s not being perceived as a leftist. He is being perceived as somebody who is deeply in touch with a sense that something has gone wrong and that the system isn’t working.”

The key quote again: “He’s not being perceived as a leftist. He is being perceived as somebody
who is deeply in touch with a sense that something has gone wrong and
that the system isn’t working.” This is a Clinton supporter talking.

Today’s independents aren’t “moderates” who want conventional, faux-centrist policies and less “gridlock.” Political partisans want less gridlock around issues of disagreement, because it advances individual party agendas and careers in addition to those issues. But in the main and with a few important exceptions — women’s health and rights, racial justice, gun violence — both parties have agreed and cooperated on broad policy goals.

Leaders of both parties, for example, broadly believe in the current military style of policing. Both believe in a justice system that coerces defendants into plea bargains, guilty or innocent. Both believe in the “importance of Wall Street to the economy” and that big financial institutions should be defended, not broken up. Both parties have offered and enacted a long and strong diet of lower taxes, spending austerity, war and more war. We’ve had these policies, delivered in a fully bipartisan way, for decades.

Partisans and leaders of both parties believe, in the main, that the status quo needs a tweak, but should be kept in place. Today’s independents, in contrast, are done with that.

Which leads back to my first main point — that to win, Clinton must win Sanders independents. If she fails, she is likely to lose. The problem for Clinton is, how to do that.

A Preliminary Look at the Electoral College

Let’s look at that Clinton problem through the lens of the electoral map and electoral college, courtesy of Earl Ofari Hutchinson writing at the Huffington Post (my emphasis):

Hillary Must Win Over Sanders Supporters — or Else

The general consensus is that Hillary Clinton will beat out Bernie Sanders for the Democratic presidential nomination. The almost general consensus is that Clinton may not make it to the White House without Sanders. The numbers and the states that she has won are the starting point to figure out why. She’s trounced Sanders in Virginia, Georgia, Alabama, Tennessee, Arkansas, Texas, Mississippi, North Carolina and Arkansas. With the very iffy exception of North Carolina and Virginia, these are states which she has absolutely no chance of winning in November. She also trounced Sanders in Florida, Ohio and Arizona. These are states that will at best be a tough slog to win. All three have GOP governors, and top heavy GOP controlled state legislatures. All three have been deeply implicated in putting on the books blatant voter suppression initiatives, laws, and ploys. The states that she has a lock on are the states that are lock down Democratic states anyway such as California and New York. George Bush Sr. was the last GOP presidential candidate to win California in 1988. Ronald Reagan was the last GOP presidential candidate to win New York in 1984.

Clinton will net close to 200 electoral votes from the Democratic lock states. But after that she’ll need to find 60 to 70 more electoral votes in states that have gone either way in general presidential elections the past two decades. That makes it a brutal, grind em’ out, numbers game to bag enough of those states to put her over the top. She’ll make a huge, all out drive to squeeze every African-American and Hispanic vote that she can get out of the swing states. That’s absolutely crucial. But that won’t be enough to insure a win in a state such as Michigan — also with a GOP governor, embattled yes, but still a GOP governor — and a state in which the GOP candidates combined got around 130,000 more votes than Clinton and Sanders in that state’s primary.

There’s only one place she can get the votes from to close the gap and that’s from Sanders’ impassioned backers. Yes, there’s lots of loose talk and some polls that claim that if Sanders isn’t the nominee, many of his supporters will write in Sanders name, stay home, or vote for a Green Party candidate.

Some may well do just that. The betting odds, though, are that most won’t. However, that doesn’t tell the story of what Clinton needs to do to insure Sanders’ supporters are on board with her. They have to be mobilized to actually believe that Clinton will be a president who will fight not to extend Obama’s programs, but fight for Sanders’ program

And that last sentence, for Hutchinson, is the problem. As I pointed out here, Clinton would have to become Sanders if she wants his voters, and Sanders has intimated as much about his own support of her.

On that problem, first Hutchinson:

As it now stands, Clinton would be hard pressed to find many of Sanders’ backers who believe that she will crack down on Wall Street, reinstate the Glass-Steagall firewall on the banks, fight for hard-nosed regulations on the financial industry and back Sanders’ oft-stated demand that the big banks be broken up. There’s disbelief that she would try to slap a hefty tax bill on the wealthy and major corporations and that she can deftly pivot and call for a single payer health care plan. Clinton’s answer to each of Sanders’ proposals has been a mix of cautious reform and protest that his programs are too starry-eyed, costly and absolutely impossible to get through any Congress.

But that’s the dilemma. These are the exact proposals that Sanders repeatedly has shouted to crowds that stand in line for hours to see and hear him, and that pack arena after arena in the states; the very states that top the list of the handful of states that will decide the White House.

Sanders showing that he has an ace. Will he play it?

He may not play his strongest hand himself when the time comes, but he may not have to. As Hutchinson suggests, every Sanders-supporting independent (as opposed to Sanders-supporting Democrat) will play it in her mind for him, and each will judge Clinton on the outcome.

The questions then, if Clinton is the nominee, are these:

Nevertheless, everything that happens at the convention, then in November, then still later as the next administration takes office and the parties adjust to the new political reality, will flow from those answers.

We’ll look at the convention, the November election, and what comes after that in future installments.