We can’t rule it out completely, but recent suggestions that Australia is the second most likely country in the world to suffer a debt crisis and recession in the next one to three years seem overblown. The level of household debt isn’t as high as it appears at first sight. And the latest data suggest that the danger posed by the high share of interest-only mortgages is starting to recede…

There are certainly reasons to be concerned. There’s a risk that at some point a major fall in house prices and/or a rise in interest rates will mean that some of the debt won’t be repaid. The latest data, however, suggest that the risk isn’t as big as it first appears and that it may even be shrinking.
To start with, Australia’s household debt to GDP ratio looks higher than it really is as it doesn’t take into account the cash that households have in offset accounts… 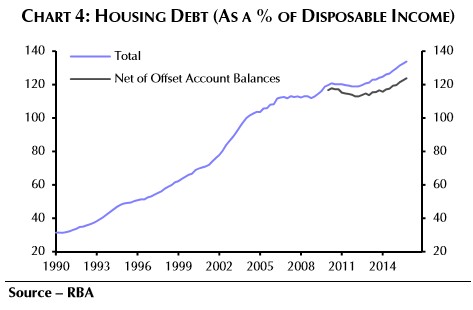 Admittedly, the real concern is that 40% of all mortgages are interest-only mortgages, which are more vulnerable as and when interest rates rise significantly from their current record lows. Make no mistake, this is the single, biggest risk to the housing market and the health of the banks. However, the tighter lending conditions and the recent small rises in banks’ mortgage rates mean that interest-only mortgages have started to account for a smaller share of all new loans… 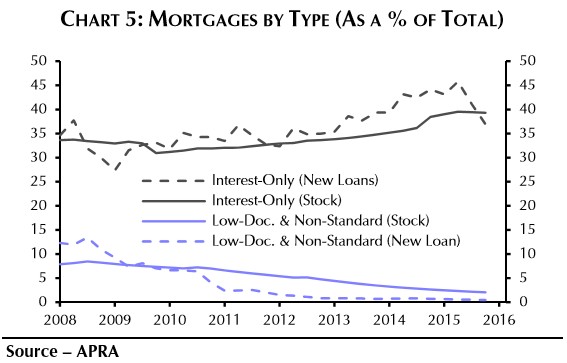 Overall, we don’t want to sound complacent about the outlook for the Australian economy (we are actually more downbeat than most) and we can’t completely rule out a debt crisis triggered by problems in the mortgage market in a few years’ time. However, the real problem probably won’t emerge until the RBA starts to raise rates from record lows, which may not happen for a year or two yet. And the latest evidence suggests that by then, the foundations of the mortgage market may be looking a bit more solid.

For mine, the bigger risk lie on the liability side of the banks’ balance sheet, whereby they have borrowed obscene sums from offshore to pump housing (see next chart), in the process leaving the banking sector and economy exposed to the whims of global capital markets and the risks of a sudden liquidity shock: 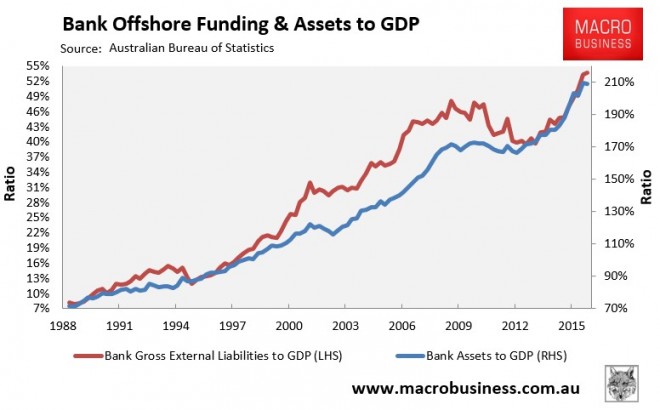 It has also put constraints around the Federal Budget in that it must continually strive for surplus to maintain Australia’s AAA credit rating, otherwise any downgrade would automatically flow-on to Australia’s banks, raising their cost of funding.

Whether or not Australia is likely to experience some kind of financial crisis within the next three years is a moot point. But having one of the world’s most overvalued housing markets, combined with overly indebted households and an extreme reliance on offshore funding, is hardly a good situation to be in and the opposite of prudence.