Yves here. This post is written in anodyne technocratic terms, but the data is sobering. A key point is the influx of migrants, particularly from Syria, which has a well-educated population, is going to make an already-dire situation worse. Denying young people any hope of a decent future is certain to lead to radicalization. Yet European leaders act as the Market Gods must be appeased, no matter what the human cost.

By Nuria Boot, Research Assistant in the area of Competition Policy; Karen E. Wilson, who has worked in the Structural Policy Division of the Science, Technology and Industry Directorate at the OECD and is an Associate Fellow at the Said Business School at Oxford University and a Visiting Lecturer at the Stockholm School of Economics in Riga; and Guntram B. Wolff, Director of Bruegel and a member of the French prime minister’s Conseil d’Analyse Economique. Originally published at Bruegel

Europe’s Mediterranean neighbourhood has become a focal point of attention due to the refugee crisis. With over a million people arriving in Europe in the course of 2015, the question of how to address the growing immigration pressures has become a central political issue.

Countries around the Mediterranean are also under scrutiny due to mounting security concerns in Syria, Libya and elsewhere. A range of economic literature links conflicts to demographic conditions and poor economic opportunities for young people. Countries undergoing “demographic transition”, resulting in very youthful populations, are especially vulnerable to conflict, in particular when economic opportunities are scarce (Homer-Dixon 1999; Kelley & Schmidt 2001; Urdal 2004; Kahl 2006).

Youth unemployment is an urgent issue in many countries across the Mediterranean region, where 25.4 million people are unemployed, of whom 7-8 million are aged 15-24. (World Bank 2014; United Nations World Population Prospects 2015).  490 million people live in the region, of which 192 million are part of the 8 EU member states.

The proportion of young people not in education, employment or training has increased since the financial crisis, and in many countries youth unemployment rates are higher than unemployment in the older working age population. The figures available may even underrepresent the true level of unemployment due to non-participation in the labour market.

The growth in youth unemployment is particularly worrying. It can have long-lasting effects on productivity and potential growth, often excluding young people from the labour market for an extended period of time, lowering their productivity and affecting their job prospects for life (Arulampalam 2001; Gregg and Tominey 2005). 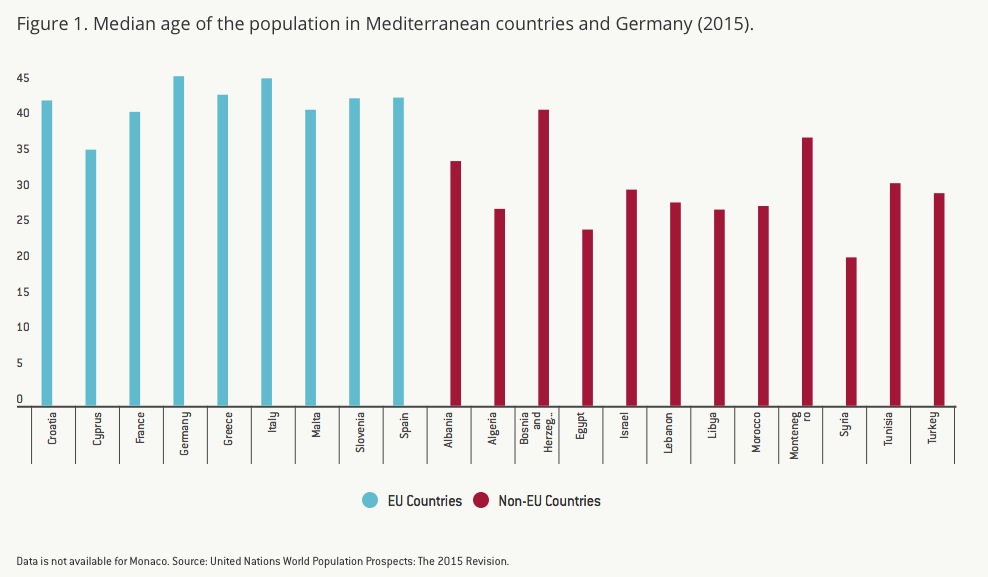 Around the Mediterranean, the median age has increased substantially over the past two decades, but with significant differences across countries. 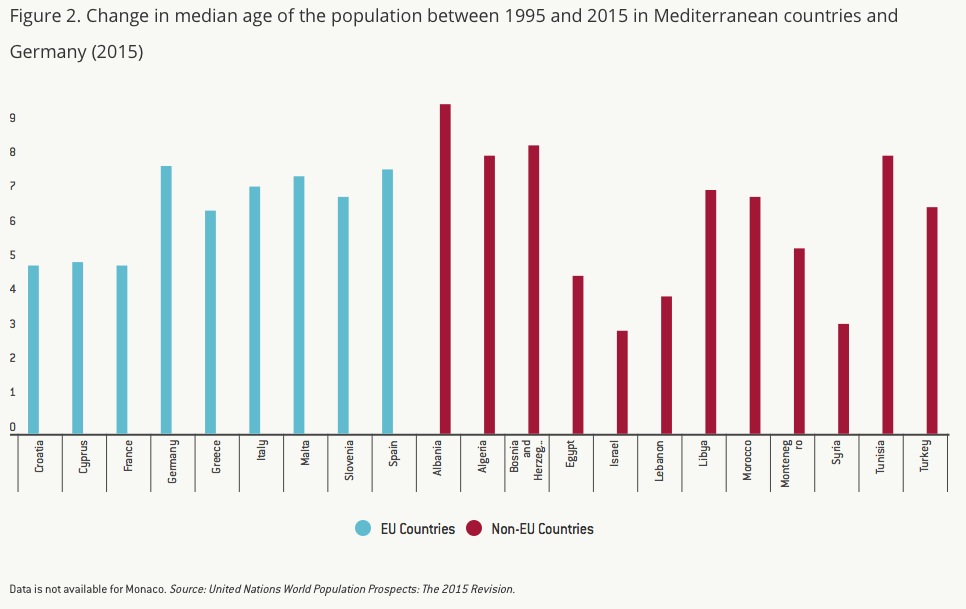 Over the past decade, growth per capita was higher for the non-EU Mediterranean countries. Figure 3 shows the average annual GDP per capita growth of the last ten years, based on purchasing power parities.

The low growth figures in the EU reflect the deep scars left by the euro-area crisis. Growth in non-EU countries was relatively robust in comparison, suggesting some income convergence, although from a low per-capita level. 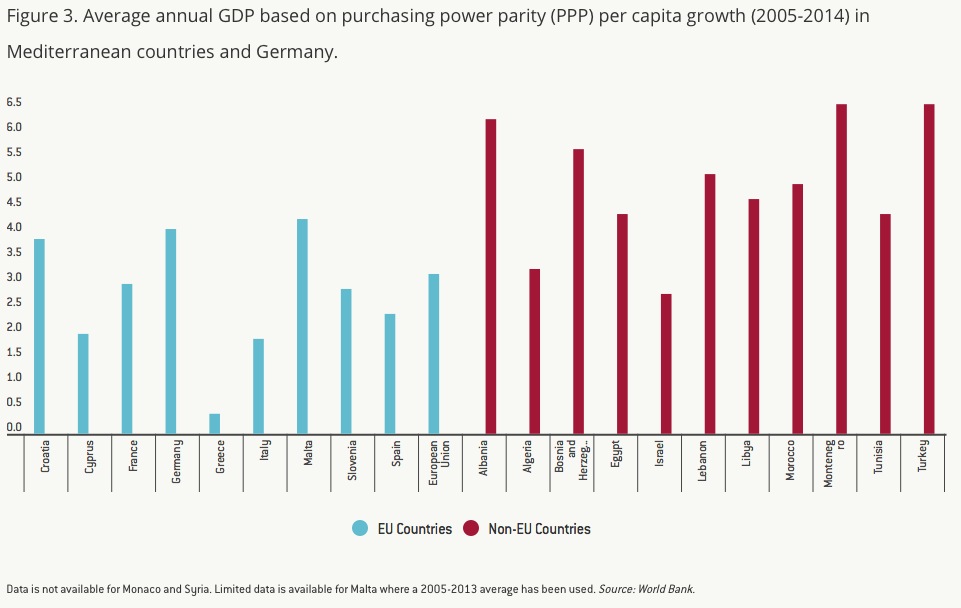 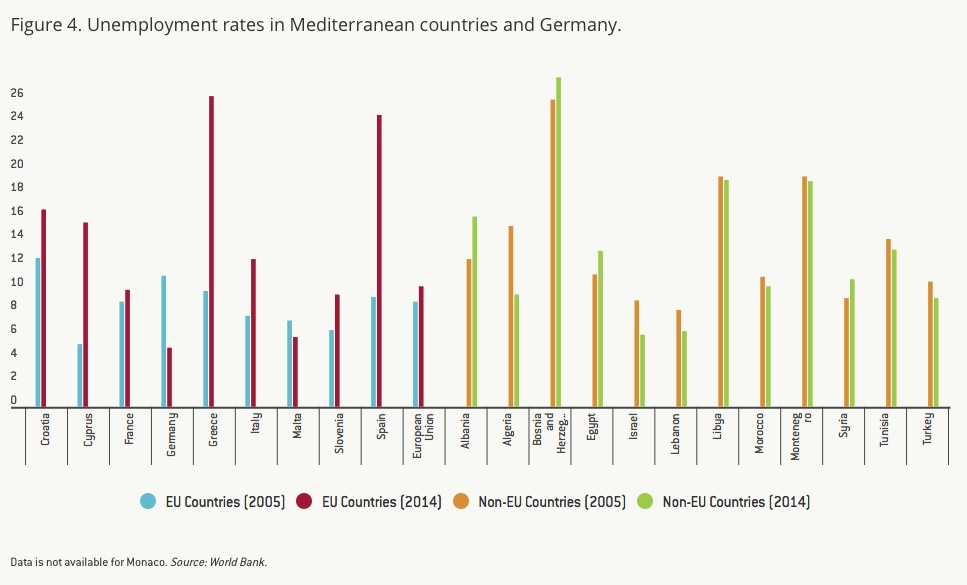 Youth unemployment rates, defined as the share of the labour force aged 15-24 without work but available for and seeking employment, increased much more than overall unemployment rates in most Mediterranean countries from 2005-2014. 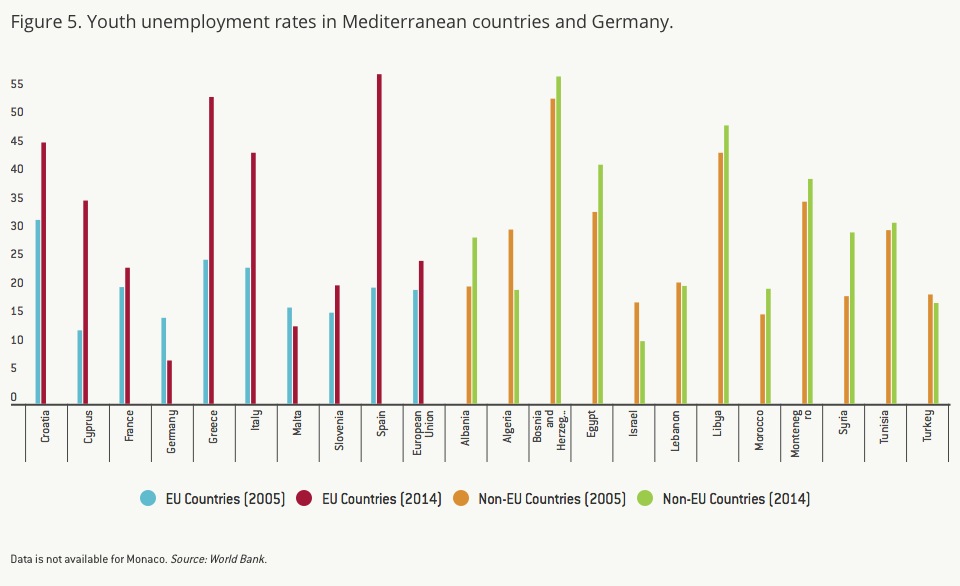 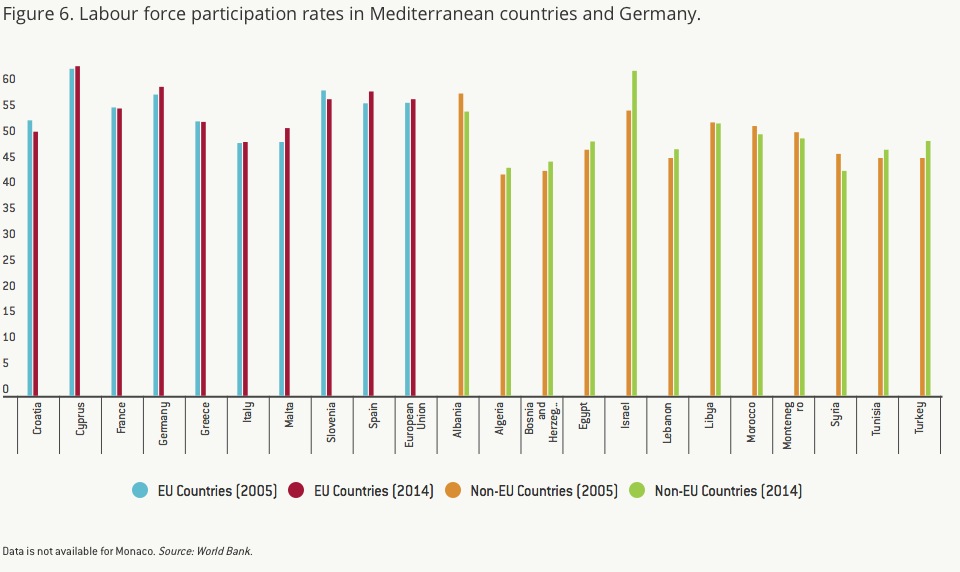 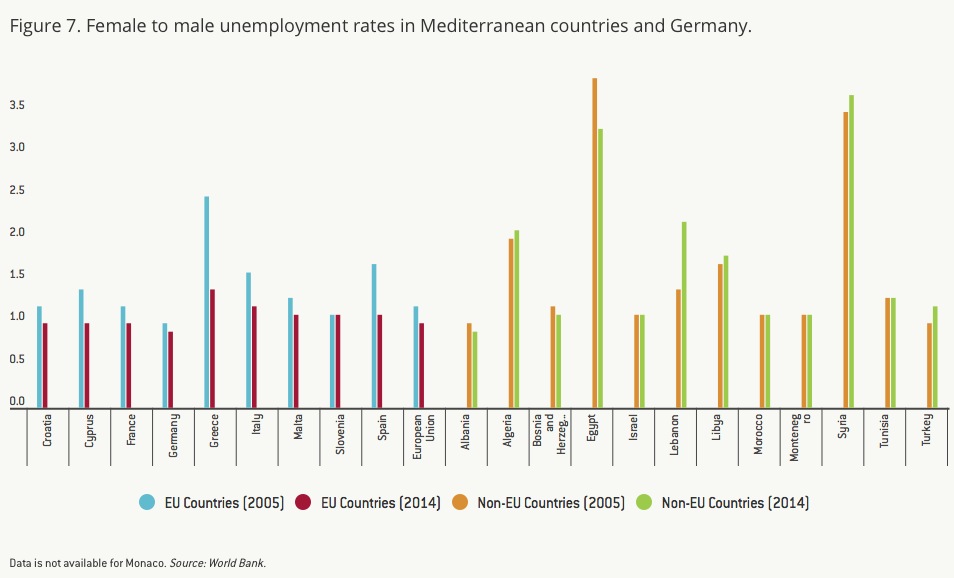 The Mediterranean faces a crisis of unemployment and youth unemployment that matters not only for the countries individually but also has wider implications, including for the EU as a whole. Initiatives in the region have failed to prevent high levels of youth unemployment (European Commission; European Training Foundation 2015; Koenig 2016).

Meanwhile, demographic pressures and immigration flows suggest that unemployment rates could increase further in the years to come. Tackling youth unemployment in the region should continue to be a high policy priority, but the focus must be on programmes that have demonstrated results. In addition, the EU’s neighbourhood policy needs to be given greater priority and should include some countries, such as Libya and Syria, which are currently at the margins of the partnership.