Yves here. This is an important piece that connects many important dots but rejects drawing other important inferences. The author Mark Cliffe seems unwilling to consider that economic policies becomes even more politicized when they fail (or worse, explicitly choose not to) deliver adequate wages and security to most citizens so that top earners can cream even more off the top. In addition, he also accept that high levels of international capital flows are strongly correlated with more frequent and severe financial crises. Thus he argues, as an article of faith, that reducing the amount of global integration would be a Bad Thing. Over the near term, he is likely correct in that any meaningful change in the economic order will result in transition costs. But despite describing the current state of dislocation fairly well, he seems unable to grasp that we are close to the end of the 35 year neoliberal paradigm, which substituted asset price booms and increased consumer access to borrowing for policies that focused on increasing average worker wages. In the topsy-turvy world of the new orthodoxy, worker prosperity was bad because…gasp…it might create inflation! And economists and policymakers have done such a splendid job of fighting the last war long after the inflation threat was vanquished that they are now on the verge of creating deflation, which is far more destructive than inflation, particularly in debt-burened economies.

And this analysis plays into an issue that we’ve raised as far as the fall elections are concerned. The economy is more vulnerable than the overwhelming majority of pundits seem to recognize. Rocky markets or further decay in the economy that the 99% live in will help outsiders at the expense of incumbents. Sanders’ big rise in the polls started in January, when market upheavals reminded voters that Wall Street still poses a risk to the economy and the last time they blew it up, they walked away with cash and prizes rather than orange jumpsuits.

The extended period of low growth following the Global Crisis was denoted the ‘New Normal’ by some. This column argues that the period is still ongoing, and would be more usefully described as the ‘New Abnormal’. Far from being an equilibrium, the low growth was achieved by progressively more aggressive and unprecedented monetary policy actions, in response to a series of financial panics. Furthermore, the aftershocks of the Crisis are still colliding with a series of profound structural changes to and instabilities in the global economy.

The ‘New Normal’ never was, isn’t, and should be replaced by the ‘New Abnormal’. In the wake of the Global Crisis, the idea that the global economy had entered a low-growth equilibrium gained a curious acceptance. In reality, the situation is far from ‘normal’, and the attempt to characterise it as such has been deceptive, disingenuous, and dangerous.

Instead, economists, policymakers, and investors would be better advised to think of the world economy as being in a period of profound disequilibrium, as the aftershocks of the Crisis collide with and complicate a range of structural changes. Ever since the onset of the Crisis in 2007-08, the global economy has been repeatedly flirting with a descent into an even more damaging deflationary depression. Policymakers have averted this only by a combination of luck, judgement, and experimentation.

Belatedly, Mohamed El Erian – who, along with his former colleagues at PIMCO did much to promote the concept of the New Normal after they first floated it back in 2009 – has just abandoned it. He has argued that “it is no longer unusual to suggest that the West could linger in a low-level growth equilibrium […] Yet, […] growing internal tensions and contradictions, together with overreliance on monetary policy, are destabilising that equilibrium” (El Erian 2009).

However, the suggestion that we have been living through a New Normal ‘equilibrium’ for the past seven years is hard to swallow. Normality suggests that the Crisis is behind us, and that we again understand what’s happening and that we can make predictions. It invites little sense of urgency to make radical policy adjustments. Indeed, it tempts us into thinking policy ‘normalisation’ may be around the corner.

Indeed, it is hard to apply the dictionary definition of ‘normal’ to our recent experience – dictionaries typically define it as regular, usual, healthy, natural, orderly, ordinary, rational. There are several reasons why the term ‘abnormal’ might be more easily be applied. Rather than an ‘equilibrium’ we might more usefully think of the economic environment as having been one of latent or incipient instability.

The first ingredient of the New Abnormal is the fact that the mediocre growth that has been achieved over the past few years has depended on unprecedented and progressively more aggressive monetary policy initiatives. Meanwhile, fiscal policy, after the emergency easing of 2009-10, has been largely side-lined as a stabilisation tool. High levels of public debt have led most governments to calculate that they have little scope for fresh fiscal stimulus, notwithstanding the sustained fall in the yields on government bonds.

The impetus for further monetary easing has typically been propelled by renewed panic attacks in the financial markets, which have rekindled the fears of a fresh chaotic downturn. The near-death experience of the Eurozone in 2011 following the emergence of the Greek debt crisis, the ‘taper tantrum’ in the emerging markets of 2013, and the China-inspired sell-offs of the past year all forced radical rethinking and easing of policy by the central banks. Zero interest rates, large scale asset purchasing (quantitative easing), and then a shift to negative interest rates, all have taken us into uncharted territory.

This policy experimentation is hardly consistent with the New Normal notion that the global economy has been naturally gravitating towards a low-growth equilibrium. While the US Federal Reserve finally took the first step towards ‘normalising’ policy with an interest rate rise in December, the Bank of Japan and ECB have been busily ‘abnormalising’ with negative rates and more quantitative measures to pump money into their financial systems.

The very fact that these monetary innovations are unprecedented means that their impact is unpredictable. This necessarily increases the scope for policy errors and conflicts. Indeed, the lack of consensus on what needs or can be done is palpable. One sign that all is not well is the recent emergence of a vitriolic debate about helicopter money, whereby central banks create money to distribute to citizens directly or via the government.

Pre-Crisis Economic Relationships Have Broken Down

Policy judgements are also clouded by the fact that pre-Crisis economic relationships have broken down. While the New Normal crowd try to declare the crisis a one-off interruption, it is clear that a range of structural changes are still in progress. We are faced with the rebalancing of China away from investment and export-led growth, sectoral shifts in the labour market, and a range of disruptive new technologies. On top of these, we are still contending with the unfinished business of tightening financial regulation and reshaping the financial system. Each of these structural shifts come with profound social and political consequences.

In this context, how do we identify ‘trend’ economic growth? Where are we in the cycle? Talk of the New Normal shows how far the consensus still suffers from the ‘equilibrium delusion’. This is precisely the kind of thinking that led to the financial crisis in the first place.

Two examples from the US illustrate the structural problems facing policymakers. Figure 1 shows how falling unemployment failed to lead to the acceleration in wage growth that is typical before the crisis. In a similar vein, this has led the Fed to hold off from raising rates. At the current level labour market ‘slack’, as measured by the Fed’s own favoured index, the Fed funds rate ‘ought’ to be at close to 5% by now.

Figure 1. Despite falling US unemployment, pay is slow to pick up 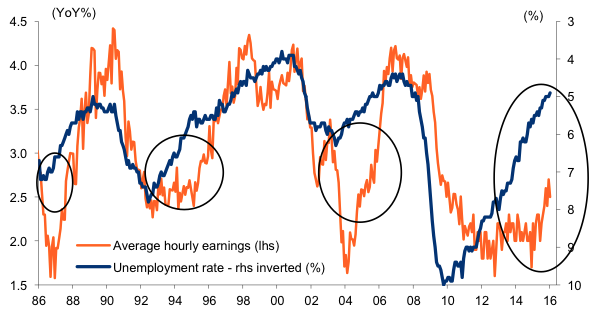 Figure 2. The Federal Reserve has been slow to respond to the tighter labour market 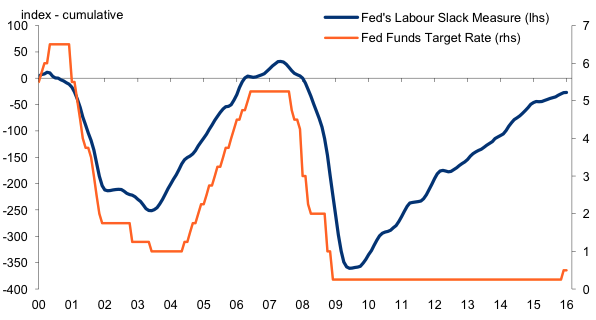 While the New Abnormal makes it hard to identify the trend, insofar as economic growth is weaker on average, recessions are likely to be more frequent and prolonged. Taking the Eurozone as an example, had its growth trend been lowered from 2% to 1% since 1970, then the number and duration of recessions would have been doubled (see Figure 3). Indeed, this might be something of an underestimate, since the damage from recessions arising from increased unemployment, bankruptcies, defaults, and political tension tends to persist.1 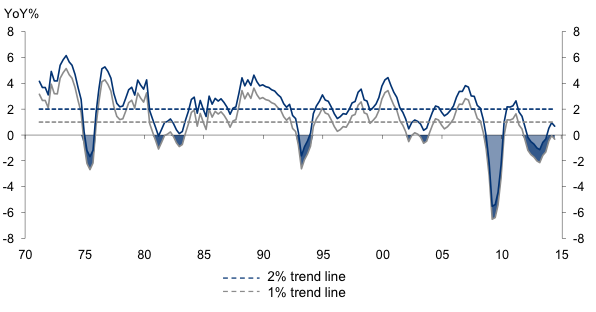 Economic weakness and instability are also sources of political tension, both within and between countries. High unemployment and rising inequality have fuelled a backlash against globalisation, free-trade, and big business. At least outside the US, support for progressive taxation and tougher regulation has grown. This may weigh on financial markets and corporate confidence and investment. In this way, there is the danger of a negative feedback loop between economic and political instability.

Were the populist backlash to lead to material shifts in the thrust of policy, then it would have lasting, structural effects. For example, backtracking on trade liberalisation could damage the growth in trade and investment. So distribution, institutions, and politics matter. This is something which is largely overlooked by the neoclassical economic models, with their single representative agents, which are still doggedly employed by many economic forecasters.
Asset prices are more vulnerable to setbacks

Central banks have successfully boosted asset prices, not least because of the heavy purchasing of bonds in their QE programmes. Indeed, this has invalidated the original New Normal prediction of low investment returns. Since their nadir first quarter of 2009, US equities have returned an annualised 16%, corporate bonds 9%, and even government bonds over 4%. However, this leaves asset markets vulnerable if the economic reality fails to measure up to these higher valuations.

Moreover, the regulatory-driven shift of risk away from taxpayers towards markets compounds this risk. The sell-off in bank contingent convertible bonds(CoCos) earlier this year is one example of such fragilities. The essential point is that attempts to increase the resilience of individual banks do not necessarily make the system as a whole more resilient.

Such uncertainty lies at the heart of the New Abnormal. The attempt to sweep this collection of structural instabilities and fragilities under the carpet with talk of a New Normal is a damaging distraction to the urgent task of confronting this reality.