Lambert here: The Five Eyes seem to be living in interesting times.

I’m not telling you anything that you don’t know when I observe that Australia is in the grip of the greatest economic scab grab of my lifetime. By that I mean that the national economic pie is being torn apart by the multitudinous grasping hands of rent seekers. MB does it’s best to chronicle the frenzy but, honestly, it’s impossible to keep up. Here’s a list off the top of my head of those interests currently deploying their all to rip out a slice:

This outlandish scab grab is universally aimed not at winning business, nor competing successfully but at policy protections to secure or preserve economic rents. Why has the great scab grab come about? I see eight reasons.

We should expect a rising chorus of locusts during a federal election especially as the economy and budget sink further into post-mining boom troubles. The pressure is on to repair the budget balance and that means cutting back on concessions or raising new taxes. But, I put it to you that this is the least important driver of the frenzy; a flash point if you will. What is more important is why the budget is such a powerful driver of rent seeking in the first place.

This is the more important reason behind the centrality of the budget to business and thus the push for rents. Australian spruikers like to sell the economy as “diversified” but this is rubbish. At its base, Australia has only two economic drivers: houses and holes. Mining delivers national income and banking leverages it up to spread the wealth. Everything else follows these two. That means that these two industries have limitless power over policy. Disruption in one equals disruption to the entire nation.

Moreover, with half of export income (a lot more than that for external sector profits) driven by a largely foreign-owned mining sector, the corporate taxes and royalties in the budget are the primary mechanism via which Australia collects the income derived from its natural resource endowment. The stock market and wages do some too but it is the budget that is the great redistributor via low taxes for households.

In the case of the banks, the relationship between budget, national interest and private profit is even more compromised. The banks fund (create!) the entire Australian current account deficit. The budget guarantees these same offshore borrowings. Any division between the two is purely for show.

3. Banks and miners showed us the way

There was a kind of elongated tipping point when all of this became de rigueur. The GFC bailout of the banks and subsequent disguising of the fact was a red rag to the rent seekers. It declared to all with the eyes to see that the Australian government had passed through the ‘markets golden age’ that began in the late eighties and was wide open for bailouts.

Then mining showed these hungry rent seekers the way with the anti-resources rent tax campaign of 2010 which, with a just a few million dollars of advertising spend, initiated a coup d’état that enabled it to write its own tax code, literally in the Cabinet Room of Parliament House.

But these two industries were operating on fertile ground. After decades of mergers and acquisitions, the wider Australian economy is extraordinarily over-concentrated with oligopolies operating in every major sector. Shadow Assistant Treasurer Andrew Leigh spoke of this in last week’s John Freebairn Lecture:

Like a large tree that overshadows the saplings around it, firms that abuse their market power prevent newer competitors from growing. They hurt entrepreneurs and often reduce the scope for innovation. Consumers suffer through higher prices, lower quality and less choice.

But some of the benefits of market power invariably go to the people who run the firms. At the time of his secret meeting at the All Nations Hotel, Richard Pratt was the third richest person in Australia.

But aren’t moguls who made their money through wielding market power the exception? What about the story of ingenious entrepreneurs creating value for the community? Such examples do exist – think of Boost Juice founder Janine Allis, Red Balloon founder Naomi Simson, Atlassian founders Mike Cannon-Brookes and Scott Farquhar and Bing Lee founder… Bing Lee.

Alas, when it comes to the wealthiest Australians, breakthrough innovators are not the norm. Analysing how the richest Australians made their money, Gigi Foster and Paul Frijters estimated that just 5 out of 200 had become rich primarily by inventing a new product or service.[i] Far more commonly, the most affluent operated in industries with limited competition, or significant reliance on government decisions.

[i] Paul Frijters and Gigi Foster, ‘Rising Inequality: A benign outgrowth of markets, or a symptom of cancerous political favours?’, Grattan Institute, 2015. 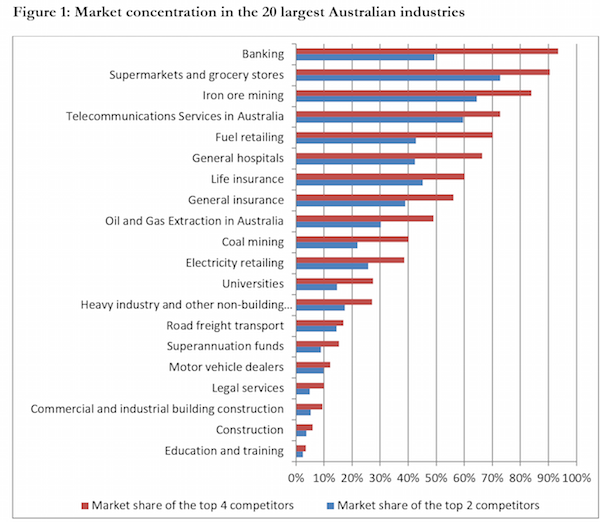 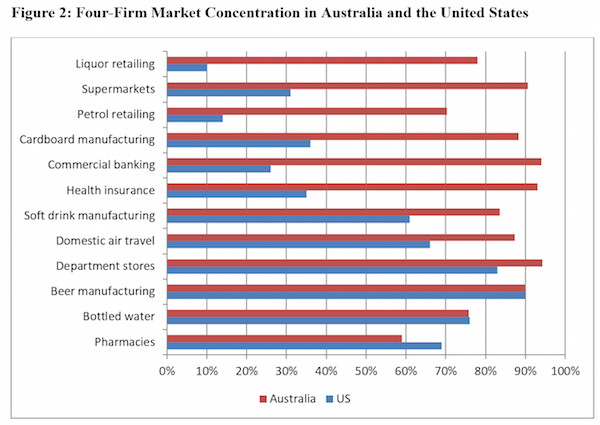 Precisely. Such market structure inherently lends itself to rent seeking over competing.

5. A bought and paid for media

I’ve chronicled extensively the business model links between Australia’s media duopoly of Newscorp versus Fairfax and their respective real estate businesses. It must be said, however, that that is symptom rather than cause. Digital disruption is the real driver as old media business models of expensive journalism cross-subsidised by advertising disintegrate. In their place we find “churnalism” which relies upon low costs, junior writers reproducing press releases and editorial for sale.

The Murdoch half of the duopoly now operates as a straight mouthpiece for a simplistic “free markets” agenda deliberately conflated with existing businesses not competition and therefore anti-market. It has aligned this worldview with the Liberal Party side of politics completely so there is an echo chamber between a political and media power wrapping extant monopolies in protective but closed loop of logic.

In short, one side of the media is now hopelessly broken and the other side transformed into a rent-seeking foghorn.

Such as it is, Australiana tends strongly towards populism. By that I mean it very much values the appearance of fairness more than it does the actuality of it. So long as a leader can project the appropriate values of being a decent bloke, lover of sport, can rub shoulders down the pub and hang shit on foreigners then he could probably walk away with the crown jewels and a pat on the back.

I’m a bit of a blokey sort myself and totally get the appeal of an identity that privileges individual over class. But, truth be told, such a culture is easily manipulated. We see it all of the time in bogan baiting public relations campaigns by corporations and political parties that successfully prod battlers into acting against their own interests.

Ironically, in historical terms egalitarian culture derives from a sub-altern history of colonisation by imperial betters. As such it is not a milieu of self-regard that asserts its needs and pursues them in the open. It is psychology born of bitter deprivation, abuse and entitlement when opportunity presents itself. Under pressure it tends to revert to such very quickly and the Nanny State is both the loathed parent and longed-for safety net.

Don’t get me wrong, I love being an Aussie. We have some fine moments when we come together as a people. But, the market economy is never more than skin deep among Aussies with reversion to the mean of pulling favours from or for your mates never far away.

That is partly where out endless boom has sown the seeds of its own destruction. Running for so long without recession has fed and fattened Aussie entitlement like a goose hooked up to lard-pumping pipe. We now internalise all good fortune as the fruits of competence. We all now expect to be rich. And if it is not delivered we expect there is someone else to blame for it. We claim the good and blame the bad and, as a country, we are denuded of the ability to admit when things need to be fixed via simple hard work and mutual sacrifice.

Some of what we see above as rent-seeking is not cynical. It is the behaviour of the righteous, those who earned their payoff, and now want to keep it come what may. That that dividend was always in part an illusion, paid for by later generations of Aussies, is not something that even occurs to many. The boom has promised luck and riches to all of Australia and the endlessly repeated moniker of 24 years without a recession is its talisman.

So, as we head into the double structural headwinds of both peak debt and the end of the China boom, history tells us not to roll up our sleeves but to roll the dice. We won’t work harder nor smarter, we’ll look to India to buy more dirt. We won’t add value to our endowment with manufacturing, we’ll be blessed by a “dining boom” as the mining boom goes bust.

Pampered and fluffed and full of our own success we’ll expectantly await our next windfall.

Into this mix you then throw a ruthless and inept leadership class.

As a small, open economy with a large resources endowment, over-concentration and Banana Republic dynamics are a perpetual risk. Over the course of Australian economic history our prosperity has waxed and waned around periods of good policy that resisted the natural trend towards consolidation, rent-seeking and external imbalances and periods of bad policy when unscrupulous leaders exploited the divisiveness of same for their own ends.

We enjoyed a good period of policy from the 1980s through the millennium but since then it has been a steady decline towards grasping self-interest in leadership, radically narrowing ideologies and short term compromises in the name of power. We’ve now reached a point where a standing prime minister is thrilled to share his seal with the lowest of low rent-seekers in real estate agents and thinks he can get elected by doing so!

This breeds its own dividend of like-minded thinking in the polity as we all give up on any mutual purpose in the mad dash for our own smashed piece of economic pie. There’s no meritocracy to it. There’s no liberalism in it. It’s a kind of cleptocratic suicide mission that has us all scrambling over one another to beg for one more economic crumb.

Both political parties have contributed mightily to this outcome. The Labor Party mishandled its post-GFC bailouts and allowed itself to be rolled by mining. The Liberal Party has become a parody of its underlying values, celebrating whichever rent seeker will give it the greatest electoral advantage.

There are good people that would like to change it on both sides but it’s like an oil tanker with no captain and it is likely that there will be no turning it before it sinks on the rocks ahead. That’s the scary thing about it. The Great Australian Scab Grab has only just begun. As the fight over the budget turns to the fight over the ever-declining economy…well…we ain’t seen nuthin’ yet!