Our mini-fundraiser for Water Cooler is on! 28 donors have already invested to support Water Cooler, which provides both economic and political coverage, at a time when former Clinton Administration official Brad Delong announced, following the purge of two Sanders-supporting writers, that those deemed to be too far to the left will be “gleefully and comprehensively trash[ed]” come November. Independent funding is key to having an independent editorial point of view. Please join us and participate via Lambert’s Water Cooler Tip Jar, which shows how to give via check, credit card, debit card, or PayPal.

Ever since the Global Financial Crisis, advanced economies have been grappling with the spectre of deflation. While this was very clearly a reflection of the downswing in economic activity in the aftermath of the crisis, such price deflation has proved remarkably impervious to the most expansionary monetary policies and liquidity expansion that the world economy has yet seen. This has had adverse consequences in terms of producers’ expectations, which in turn have kept investment low. It has not benefited working people because wages have stayed low or continued to fall. And it has generated tendencies of the debt deflation-type that Irving Fisher had warned against, whereby the real value of debt and of debt servicing keep rising because of falling prices, and make it harder for debtors to deleverage or to increase their spending.

All this has been true of the developed economies at the core of global capitalism for some years now. But in general it was presumed the developing countries, especially the more prominent emerging markets, were less prone to such tendencies. Indeed, because the developing world as a whole continues to grow faster than the North, and because some large emerging economies like China and India continue to experience recorded GDP growth rates of 6 to 7 per cent, it was perceived that they would also have inflation rates that would show rising or stable prices. In countries such as India that are still hugely affected by agricultural cycles affecting food prices and other forms of sectoral supply bottlenecks, there seemed to be no reason for prices to fall, beyond the secondary impact of the global fall in prices of primary commodities like oil.

However, it now appears that this too was a misconception about the new economic patterns emerging in the Global South, including in economies like those of China and India. Recent trends show a remarkable – and worrying – convergence of producer prices in these countries with those in the advanced economies, where price deflation has become rampant.

Deflationary tendencies were already evident in China from about five years ago in terms of producer prices behaviour. This was not a surprise given the huge expansion of production capacity that had marked the previous decade, which had led to both production gluts and significant overcapacity in many producing sectors. This was for some time partially hidden by the construction boom unleashed as part of the recovery-and-stimulus package unleashed by the government. But as that package also led to dramatic increases in debt across all sectors, it too now seems to have run out of steam.

As a result, as Chart 1 shows, producer prices in China have been mostly falling or flat since mid-2011. For the last three years, even consumer prices have decelerated, which is somewhat surprising in an economy that is still supposedly growing at around 6.5 per cent in terms of GDP.

The case of India – described in Chart 2 – is even more surprising. In fact, the Indian economy is not usually described as on currently facing demand deficiency, and supply bottlenecks are more usually mentioned as the major constraints on economic activity. Yet even in India, while retail inflation (or the consumer price index) still remains relatively high (in excess of 5 per cent per annum) it has fallen considerably from the earlier rates of around 8-10 per cent. Much of this is the result of food price inflation, which obviously impacts directly and disproportionately on the bottom half of households.

However, the proxy for producer prices (wholesale prices) show a sharp deceleration even in India. More significantly, wholesale prices in India have actually been falling (on a year-on- 2 year basis) since January 2015, that is for well more than year now. This obviously will have a similar depressing effect on both producer expectations and investment in India. 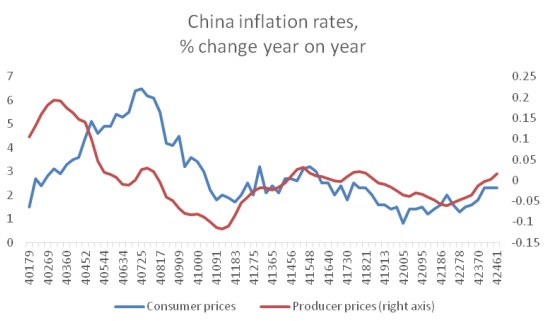 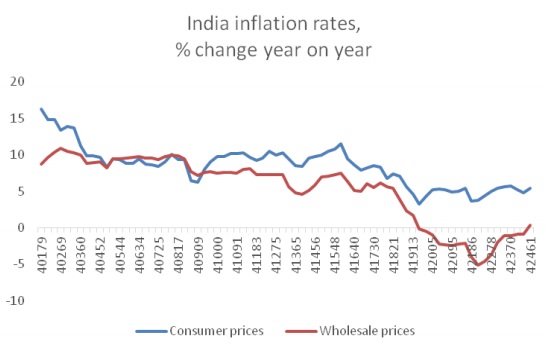 It is worth noting that such price decelerations and even declines have occurred despite other variables moving in ways that are assumed to have inflationary impact. Thus, as Chart 3 shows, nominal effective exchange rates (calculated for a weighted basket of trading partners) have depreciated for both China and India in the recent past, with no appreciable impact upon domestic inflation. 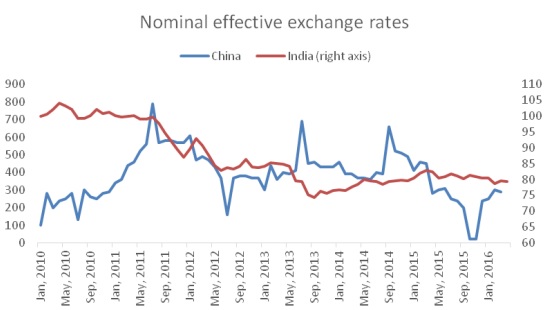 Further monetary policy cannot be accused of being too tight in China at least, and China has also seen a dramatic expansion of debt to GDP indicators across all sectors. Even in India, while nominal interest rates are considered high by many, the central bank has been biased in favour of measures that would ensure there is enough liquidity in the economy. It is true that declining oil prices and falling or stagnant prices of other primary commodities have reduced import prices for both countries, but for some time now the prices of oil while remaining low have not fallen further. Obviously other factors must also be at play in the ongoing producer price deflation in both countries. It may be that the features that have operated to cause price deflation in the advanced economies – inadequate effective demand because of suppression of wage incomes and continuing emphasis on fiscal consolidation, with very loose monetary policies no longer working as stimulus – are also operated to at least some degree in these economies.

Clearly, the lack of “decoupling” of these economies from the advanced economies goes beyond GDP and extends also to the behaviour of producer prices. This can only add to the concerns for policy makers in both countries, especially in India where debt default is already putting major strains on bank balance sheets.