Lambert here: Seems legit. Oh, and I like “Evasions that are so far from the point. add up to admissions.” That would seem to have wider application…

Cyprus President Nicos Anastasiades is holding secret negotiations this week with Victoria Nuland (lead image, right), the US State Department official in charge of Turkey, Ukraine and Russia, on a plan to maintain Turkish military forces in Cyprus under the flag of the North Atlantic Treaty Organization (NATO).

Anastasiades has sent his aide, Nicos Christodoulides (lead image, left), to negotiate in Washington; he met with Nuland on Monday.

After losing control of the Cyprus Parliament to an increasingly nationalist vote in an election on May 22, Anastasiades has remained behind at the presidential palace in Nicosia, where he met on Tuesday with the NATO official now conducting Cyprus negotiations for the United Nations, Espen Barth Eide. The Cyprus Foreign Minister, Ioannis Kasoulides, is due to met US Secretary of State John Kerry, on June 13.

So sensitive is the US-Turkish plan for Cyprus that American reporters for Associated Press and Reuters at the State Department have refused to ask Nuland about the talks. Gayane Chichakyan, a Washington-based reporter for the Russian government television company Russia Today (RT), has also refused to lift the news blackout.

Greek and Cyprus media have been reporting details of the Nuland plan after they details were leaked from proposals circulated by Turkish and US diplomats. The Nuland plan calls for the government in Ankara to withdraw some of the Turkish forces which have been occupying the north of the island since they invaded in 1974. Fresh Turkish troops and arms would then be redeployed in a NATO base to be opened in the area. 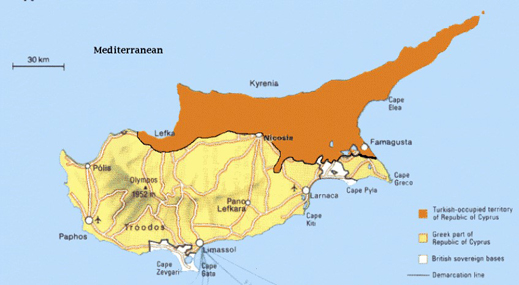 The plan also envisages overcoming Cypriot voter opposition to the Turkish military and the Nuland plan with promises of US investment in the local economy, plus the offer of US weapons. For more details of the plan, and of Russian government warnings against it, read this.

Stung by the report of Nuland’s influence on Anastasiades, Christodoulides announced: “I have read this report and [it] does not correspond to reality or to what was discussed between the President of the Republic and Mrs Nuland.” Cyprus political sources said this was so far from a denial of the Turkish troop plan that Anastasiades is suspected of trying to relieve the American pressure by intimating the details, and then denying he had discussed them. 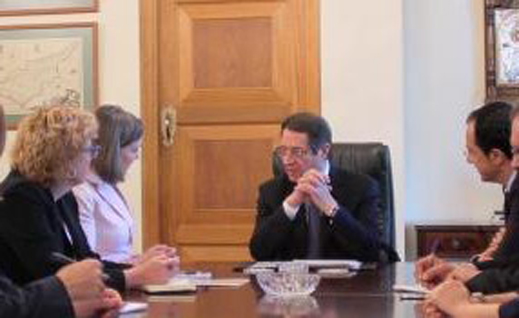 Meeting in Nicosia, April 19, 2016, from left to right – US Ambassador to Cyprus, Kathleen Doherty; Nuland; Anastasiades; and Christodoulides

After his meeting with Nuland at the State Department, Christodoulides said their negotiation had been “constructive”: 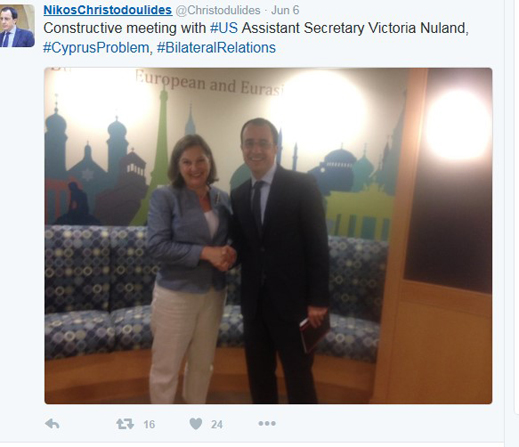 This week’s agenda of Christodoulides’s negotiations with Nuland and with other State Deparrtment and US officials has been released by his office.

In Cyprus, government officials, members of parliament, and reporters believe the American message for Anastasiades is a combination of inducements and threats. Cash is the carrot, the sources say; one of the sticks is the business relationship Anastasiades had, before he became president in 2013, with the Russian businessman and politician, Leonid Lebedev, now a fugitive in the US. The Cyprus press has been publishing questions on their relationship for Anastasiades; so far the president won’t answer.

From Nicosia, sources report growing anxiety in the presidential palace that he may be legally compelled.

Subpoenas for testimony and documents from the President’s law firm and his business partner Theofanis Philippou, have now been ordered by the New York Supreme Court and the High Court of Ireland. These, it is speculated in Cyprus, may expose the involvement of Philippou and Anastasiades in the disappearance of up to a billion dollars moved through Cyprus into the US by Lebedev. For details of the Lebedev case, read this. Lebedev is seeking to stay in the US under the protection of the US Government. In exchange, he is reportedly talkative about his business relationships.

Lebedev (below, left) was in Cyprus to meet Philippou (centre) and other influential figures last month. He is now in the US again.

On May 26, Lebedev’s deputy, Andrei Korolev (right), was arrested in Bucharest on a Russian warrant. Korolev has been charged with fraud in the stripping of more than $200 million from the regional electricity utility, TGK-2, controlled by Lebedev. Allegedly, that money disappeared through Cyprus front companies of Lebedev’s, supervised by Philippou and Anastasiades, before he became president.

In Bucharest, Romanian political sources say they expect the local court to approve Korolev’s extradition to Moscow without delay. Korolev’s lawyer says he is innocent.

In Washington yesterday Nuland’s spokesman, Elizabth Kennedy Trudeau, refused to answer questions about her talks with Christodoulides, or about State Department involvement with Lebedev. She was asked:

Trudeau (pictured below) has been director of the press office at State since last year. Before that, she was a press spokesman for several years at NATO in Brussels. By telephone she said she had referred the questions to Nuland’s office, but did not respond to the questions herself, claiming she receives “several hundred queries a day”. 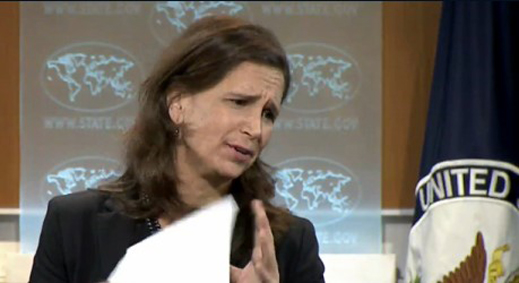 In response to the three questions, a State Department source, who asked not to be named, said: “While we will not discuss specific diplomatic conversations, the United States fully supports the UN-facilitated process under UN Special Adviser Espen Barth Eide. We continue to support efforts by the parties to reach a settlement to reunify the island as a bizonal, bicommunal federation, which would benefit all Cypriots as well as the wider region. We hope the leaders will focus on the future and reinvigorate their efforts to achieve a solution.”

According to a Cyprus press report, a State Department source also said “Assistant Secretary Nuland welcomed news that the leaders of the two sides will meet on June 8 to continue efforts aimed at reaching a settlement.”

“Evasions that are so far from the point,” observed a Cyprus veteran of US diplomacy, “add up to admissions.” 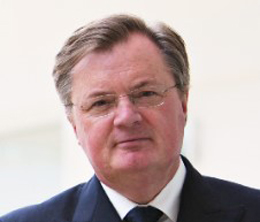 The Lebedev case, which he started with a $2 billion claim in New York state court, moved to the High Court in Dublin last week. Philippou is one of the targets of a disclosure order by the court, issued on May 30. Irish accountants, Peter Roberts (right) and Liam Grainger, are also named in the court order for questioning in the alleged scheme. Roberts is out of his Cork office this week, a source there said, adding he is not in Cyprus.

Roberts and Grainger are employed by two of the leading accounting firms in Ireland, Roberts Nathan and Moore Stephens. Irish lawyers close to the case say that those being sought for testimony in the Lebedev affair may also be questioned by the Irish tax authority in pursuit of more than $100 million in capital gains tax.