By Gaius Publius, a professional writer living on the West Coast of the United States and frequent contributor to DownWithTyranny, digby, Truthout, and Naked Capitalism. Follow him on Twitter @Gaius_Publius, Tumblr and Facebook. Originally published at at Down With Tyranny. GP article here

In the second run-up to our next “Look Ahead” piece (first one here, second one here), the piece that will attempt to decide “who beats who” (I know, whom) in the general election, I want to now look at debate styles, in face-to-face debates specifically, but also in combat on the campaign trail, since the two intertwine. I don’t think many people who have looked at the general election have factored in the debates. Most have relied just on polls, both head-to-head numbers and net-favorable numbers (both of which, by the way, are running against Clinton at the moment).

So let’s look at debate styles. Trump has a style, as does Clinton, as does Sanders. What can be said about the various combinations? For an answer, let’s turn to Nathan Robinson, editor at Current Affairs magazine.

He writes (my bolded emphasis throughout):

Unless the Democrats Run Sanders, A Trump Nomination Means a Trump Presidency

… If Democrats honestly believe, as they say they do, that Trump poses a serious threat to the wellbeing of the country and the lives of minority citizens, that means doing everything possible to keep him out of office. To do that will require them to very quickly unite around a single goal, albeit a counterintuitive one: they must make absolutely sure that Bernie Sanders is the Democratic nominee for President….

Then to the comparisons:

He then looks more closely at the paired match-ups, starting with Trump and Clinton.

Trump’s political dominance is highly dependent on his idiosyncratic, audacious method of campaigning. He deals almost entirely in amusing, outrageous, below-the-belt personal attacks, and is skilled at turning public discussions away from the issues and toward personalities (He/she’s a “loser,” “phony,” “nervous,” “hypocrite,” “incompetent.”) If Trump does have to speak about the issues, he makes himself sound foolish, because he doesn’t know very much. Thus he requires the media not to ask him difficult questions, and depends on his opponents’ having personal weaknesses and scandals that he can merrily, mercilessly exploit.

The defense offered by Clinton supporters is that none of these issues actually amount to anything once you look at them carefully. But this is completely irrelevant; all that matters is the fodder they would provide for the Trump machine. Who is going to be looking carefully? In the time you spend trying to clear up the basic facts of Whitewater, Trump will have made five more allegations.

Even a skilled campaigner would have a very difficult time parrying such endless attacks by Trump. Even the best campaigner would find it impossible to draw attention back to actual substantive policy issues, and would spend their every moment on the defensive. But Hillary Clinton is neither the best campaigner nor even a skilled one. In fact, she is a dreadful campaigner. She may be a skilled policymaker, but on the campaign trail she makes constant missteps and never realizes things have gone wrong until it’s too late.

Robinson addresses the charges that Clinton will make against Trump, misogyny among them, and how they will be deflected (we’ve actually started seeing this):

Charges of misogyny against Trump won’t work. He is going to fill the press with the rape and harassment allegations against Bill Clinton and Hillary’s role in discrediting the victims (something that made even Lena Dunham deeply queasy.) He can always remind people that Hillary Clinton referred to Monica Lewinsky as a “narcissistic loony toon.” Furthermore, since Trump is not an anti-Planned Parenthood zealot (being the only one willing to stick up for women’s health in a room full of Republicans), it will be hard for Clinton to paint him as the usual anti-feminist right-winger.

Robinson also looks at Clinton’s frequent changes of position and notes that this allows Trump to “come at her from both right and left as he pleases.” Now for the debate stage.

Trump versus Clinton in Debates

What will work on the trail will work, as I see it, in head-to-head debates as well. Trump has a fairly agile mind, if not always well anchored, and is a practiced live performer. What he did to the Republican “deep bench,” none of whom was able to counter him effectively, he can do to Clinton, who is a skilled policy wonk, but not a skilled knife-fighter in the improvisatory sphere of live debating.

Clinton’s strengths shine in debates with real debaters, people like Sanders who generally stick to the issues. In that sphere, her prepared zingers (“Sanders opposed the auto bailout” or “Sanders’ Vermont is responsible for New York gun deaths”) have some force.

Note, though, that these are prepared zingers, and Sanders’ standard counter, “Uhm, no,” was still fairly effective. Debating with Donald Trump will be all zingers, some invented on the fly, and she’s going to have to match and counter him … also on the fly. Her deep knowledge of policy — whether you love or hate her neoliberalism, you have to admit she understand it — will be pointless. Trump can’t compete on policy, and he won’t try. A Trump-Clinton debate will be a world of attack, a knife fight, as I suggested above, and frankly, as a live performer and combat artist, Trump is just better at it.

I therefore expect the debates to be his to lose, and should she be pulled off-balance some evening and make a dreadful “why did I say that?” slip, something she’s prone to, it won’t go well for her. After all, you can assume the Republicans will be united, voters and elders, behind Trump no matter what he says or does. You can’t say the same for the 43% of the voting public who identify as “independent.” Every slip will cost her.

Back to Robinson on the other pair of candidates, Sanders and Trump:

Trump’s various unique methods of attack would instantly be made far less useful in a run against Sanders. All of the most personal charges (untrustworthiness, corruption, rank hypocrisy) are much more difficult to make stick. The rich history of dubious business dealings is nonexistent. None of the sleaze in which Trump traffics can be found clinging to Bernie. Trump’s standup routine just has much less obvious personal material to work with. Sanders is a fairly transparent guy; he likes the social safety net, he doesn’t like oligarchy, he’s a workaholic who sometimes takes a break to play basketball, and that’s pretty much all there is to it. Contrast that with the above-noted list of juicy Clinton tidbits.

Trump can’t clown around nearly as much at a debate with Sanders, for the simple reason that Sanders is dead set on keeping every conversation about the plight of America’s poor [and middle class] under the present economic system. If Trump tells jokes and goofs off here, he looks as if he’s belittling poor people, not a magnificent idea for an Ivy League trust fund billionaire running against a working class public servant and veteran of the Civil Rights movement. Instead, Trump will be forced to do what Hillary Clinton has been forced to do during the primary, namely to make himself sound as much like Bernie Sanders as possible.
For Trump, having to get serious and take the Trump Show off the air will be devastating to his unique charismatic appeal. …

Trump is an attention-craving parasite, and such creatures are powerful only when indulged and paid attention to. Clinton will be forced to pay attention to Trump because of his constant evocation of her scandals. She will attempt to go after him. She will, in other words, feed the troll. Sanders, by contrast, will almost certainly behave as if Trump isn’t even there. He is unlikely to rise to Trump’s bait, because Sanders doesn’t even care to listen to anything that’s not about saving social security or the disappearing middle class. He will almost certainly seem as if he barely knows who Trump is. Sanders’s commercials will be similar to those he has run in the primary, featuring uplifting images of America, aspirational sentiments about what we can be together, and moving testimonies from ordinary Americans. Putting such genuine dignity and good feeling against Trump’s race-baiting clownishness will be like finally pouring water on the Wicked Witch. Hillary Clinton cannot do this; with her, the campaign will inevitably descend into the gutter, and the unstoppable bloated Trump menace will continue to grow ever larger.

He concludes, correctly I think:

Sanders is thus an almost perfect secret weapon against Trump. He can pull off the only maneuver that is capable of neutralizing Trump: ignoring him and actually keeping the focus on the issues.

In Clinton, both in debates and on the trail, Trump has a target rich environment for scandal-mongering and name-calling. Much of it won’t be fair, but much of what Clinton herself has said and done in the primary hasn’t been fair as well, so it’s easy to see the campaign descend into the mud, where Trump has a clear advantage, at least as I see it.

Clinton can be premeditatedly dirty (well, “tough” if you’re a supporter). But Trump can be spontaneously dirty, and he will have the best Republican oppo team they can assemble to handle the premeditation. I’m not sure Clinton can counter when she has to improvise.

And like her or not, much of Trump’s attack against Clinton will be fair. Her shifting of position; her ties to bankers and lobbyists, the money people of the world; the appearance of being “lobbyable” for the right fees; her reluctance to release her speeches; plus several areas that Sanders has not touched — the Foundation “flow of funds” and appearance of quid-pro-quo in her years as Secretary of State, her secret-server scandal, plus whatever toxic content the deleted emails may contain — all that and more be brought out and dragged like a bloody flag throughout the campaign.

I think it’s at best an even match, Trump vs. Clinton … at best. The election won’t go much better for her than a narrow win, maybe, but it could also go much worse, just on this basis alone. (I’ll consider the full range of bases when I roll all of this thought together. We aren’t considering the added element of “event risk” — black swans — yet.)

In Sanders, on the other hand, there’s nothing for Trump to hit with. The nation is past caring about “socialist,” and none of the made-up dirt that the Brock-Clinton brain trust has devised is sticking. I therefore have to agree again with Robinson’s assessment: “Sanders is thus an almost perfect secret weapon against Trump.” Sanders can keep the focus on the issues, and devastate him. No wonder Sanders has been obviously eager to debate Donald Trump. 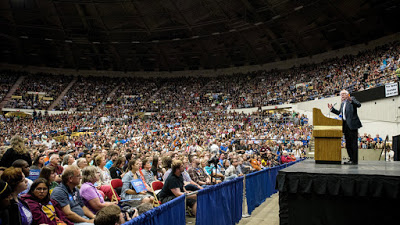 Do these people care if Sanders is a socialist? Or do they like that about him? (Source; click to enlarge.) Christopher Dilts / Bloomberg via Getty Images

By the way, have you missed the fact that Bernie Sanders is very hard to intimidate? The DNC and Party leadership people is going nuts, throwing everything they have against him to get him to stop his campaign. Do you see him stopping, or do you see his grit and determination? In his way, Sanders is as tough and aggressive as Trump.

I hope we have the pleasure of a Trump-Sanders match-up. And I fear for the outcome of a Trump-Clinton battle. There really is too much at stake.